Its monumental architecture gives the parliament complex a historical look, although the design and construction techniques, especially for the classically inspired dome, are unmistakably modern.

The centerpiece of the main hall, the dome is composed of two concentric domes, vertically aligned but at different elevations. The lower dome, on the interior, is framed in structural steel and the upper outer dome, which is larger in circumference, is constructed of composite steel and concrete.

For both structures, each steel piece, which weighed about three tons, was lifted using three tower cranes some 80 m tall and a central falsework tower, according to Ahmad Abdulmajeed El Adalany, director of the technical support department of the Arab Contractors—Osman Ahmed Osman & Co.

The steel members were prefabricated and shipped to the site, where they were placed in locations predetermined by the survey crew and then lifted into position. There were no  errors or injuries, says the team. 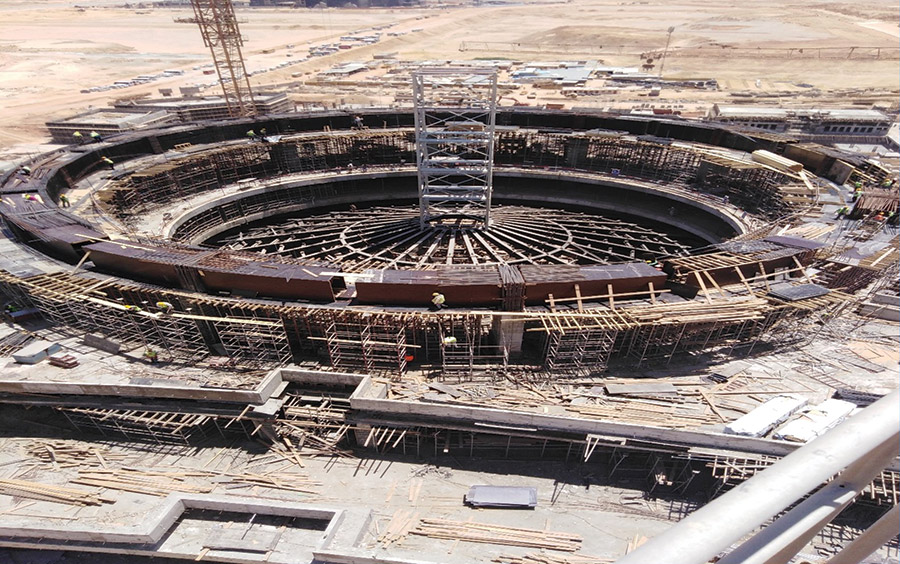 Steel erection on the dome, using three cranes and a falsework tower, was the most challenging part of the project.
Photo by Public Relations Dept., photography team at Arab Contractors Co.

With safety in mind, the contractor established a system to organize and track all required orientations, training and tool box talks. This included training for all employees and subcontractors before they were allowed to enter the site for the first time. All workers had to show identification to prove they had attended the sessions. Tool box talks were conducted daily to ensure all workers were aware of hazards and risks associated with the tasks at hand.

The complex contains a mosque and a small hospital, in addition to the parliament. The building facade presents the timeline of Egyptian civilization through the use of diverse ornamentation.

The job was completed on time and within the budget, thanks to the labor of 6,400 workers and 300 engineers.