One of the first things you notice when you crack open and reach page 11 of Brian Bowen's new history of the American construction industry is a bright color photo of an Egyptian pyramid, constructed in 2528 B.C. That makes you wonder how such a far-away pre-colonial pile of stones, built well before any explorers or colonists reached America, could kick off a history book about U.S. construction—and a very short one at that. It isn't until some 70 pages and six fascinating chapters later that the history lands on the shores of Roanoke, N.C., and Jamestown, Va., in 1585 and 1607, respectively, and the discussion of colonial construction begins.

Thereafter — except for a chapter that returns to Europe and the English industrial revolution — the history, called The American Construction Industry: Its Historical Evolution and Potential Future (Routledge, 205 pages), remains within the continental U.S.

Bowen, a former president of engineering firm Hanscomb Inc. who now is a professor of construction management at the Georgia Institute of Technology, makes his perspective plain from such an approach. He believes that the U.S. construction industry must be viewed along the arc of human civilization, and he doesn't want readers assuming it all started afresh in North America in the powdered-wig era.

We have our pyramidal structures here in the U.S., too. But they are an old sports arena in Memphis that's now a Bass Pro Shops megastore, a vernacular structure hardly worth mentioning in such a work, and the somewhat more important Transamerica Tower in San Francisco. 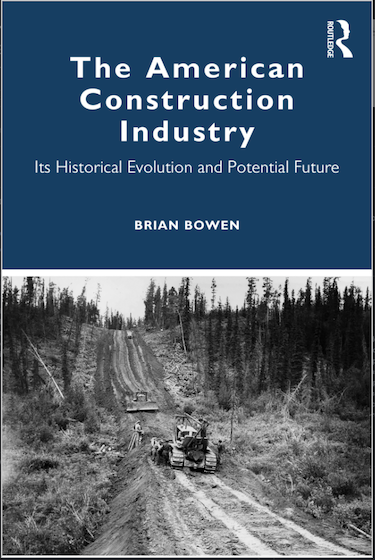 What's critical is that Bowen has connected the story of the U.S. construction industry to a human tradition extending to the Bronze Age, which is way earlier than you might have expected such a book to start.

And his bold approach pays off in a unique, high-level narrative with selective details of some of the antecedents of today's construction industry workings and conflicts. Bowen proves to be an eloquently understated tour guide of not only the craft of construction, but also of the building process and its business and legal customs.

Colonial construction processes followed the British model and continued the use of innovations such as cast iron in bridges. In the British industrial revolution, Bowen writes, mill and factory owners needed quicker construction than could be done using the traditional measures and value contracts, where project owners with the coordination of an architect, paid the contractors for quantity of work put in place at agreed unit prices. The need for speed gave birth to the general contractor, who could provide a single price, and the British need for barracks during the Napoleonic wars also drove government use of the system.

The protagonists of early U.S. history, we know, were a mix of strivers, opportunists, dissidents, immigrants, slaves and native peoples. The European-oriented intelligentsia were aware that the U.S. lacked its own unique cultural signature. So along with some innovative canals and bridges, there were also backward-looking classically inspired designs, several by the tempestuous architect and engineer, Benjamin Henry Latrobe, whom you could argue was America's first professional architect. 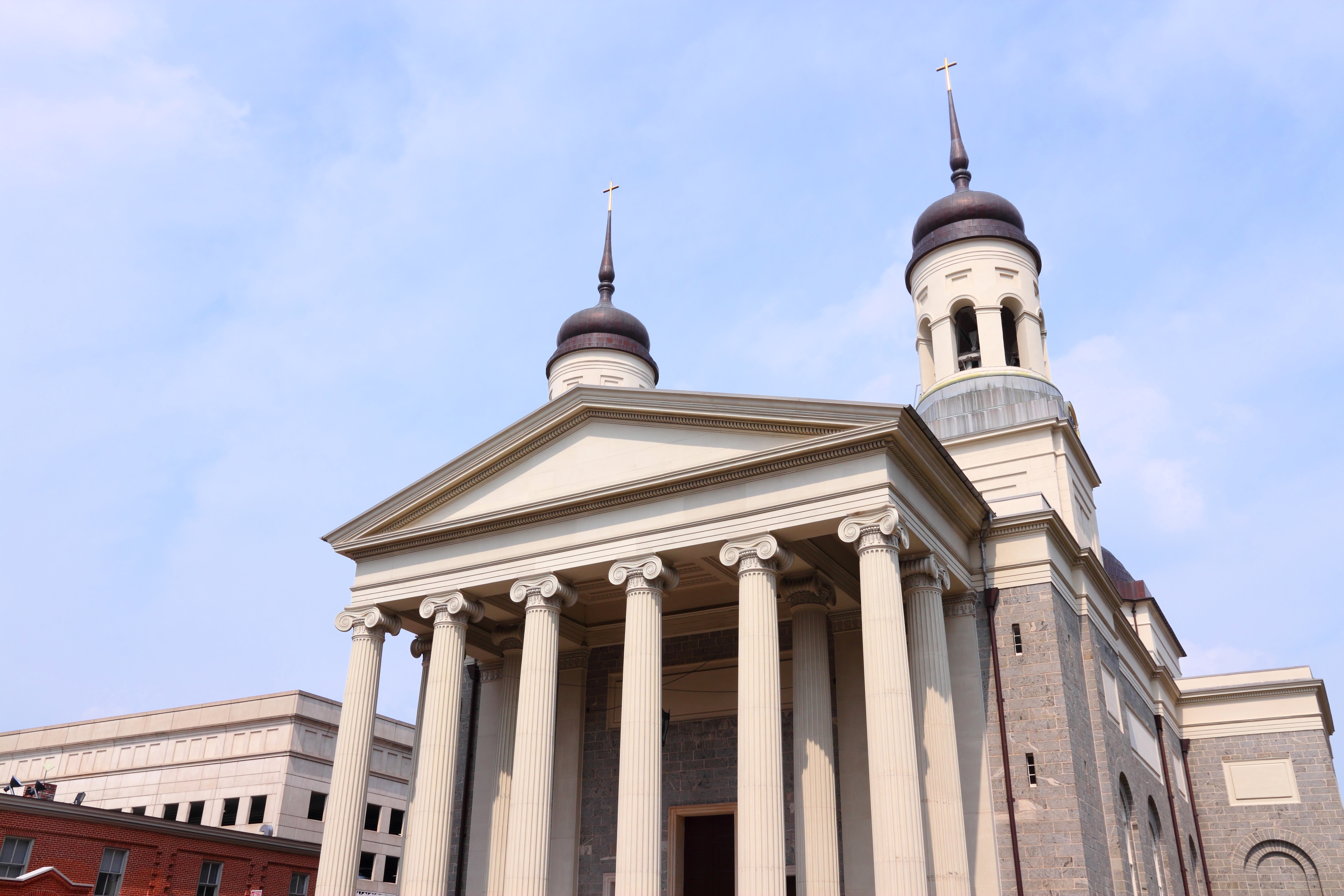 Bowen provides numerous contract samples, enumerates rules and cost-setting terms, and outlines means of staffing and hiring. Substantial sidebar articles within the chapters explore such subjects as the history of the U.S. Army Corps of Engineers, born of military engineering in 1802 when West Point was a war academy and fort building organization. Of special interest are discussions of a few individual companies, such as the multi-century rise and decline of Lockwood Greene Engineers.

In the post-Civil War period, fire disasters spur use of reinforced concrete, and building heights took off when Elisha Otis introduced the safe passenger elevator. The first operating elevator driven by a steam engine was at the Haughwort building in New York City in 1857, Bowen reports. It allowed buildings taller than five stories.

The false assumption that buildings can be described by detailed drawings and specifications that lead to accurate cost computations is a conclusion that "has tormented the industry for over one hundred years."
—Brian Bowen

Bowen does a good job depicting the stresses in determining construction fees and prices, periods of inflation that invited government intervention and what the author describes as "the quantity survey debate" over the duplication of measuring effort by multiple bidders on every project from the 1920s to the 1940s.

Such agonizing over practices, procedures, cost control and responsibilities are familiar to all involved in construction today. The American Institute of Architects has been in the middle of the troubles, prompting during its discussions a 1920 observation by Sullivan Jones, then the New York state architect, that the contracting system at the time "revolved about a false assumption: that modern buildings can be described by drawings and specifications with sufficient completeness to provide for an accurate computation of costs and bids."

Bowen adds that that conclusion "has tormented the industry for over one hundred years."

What had to be left out of this small book?

Among its omissions are some of the most complex and disagreeable aspects of the industry's relationship to government and the rest of society. 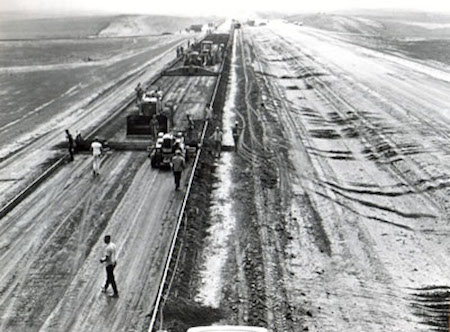 Highway construction in North Dakota in 1967. Image: Courtesy of FHWA

There's no mention of Horace King, the Alabama slave who with his owner, and then on his own, designed countless covered bridges and other structures, bought his freedom, and later served in the state government. Also missing are the mountains of influence-peddling cash furnished to a rising Texas politician, Lyndon B. Johnson, by the founder of contractor Brown & Root. And there's no discussion of Robert Moses, the New York state housing and infrastructure strongman of the 1920s to the 1950s, and his mixed legacy of urban development and neighborhood destruction. Architect icon Frank Lloyd Wright is missing, too.

All can wait for other books. Along with his wonderful historical tour, Bowen also has briefly summarized the current issues facing today's construction industry and offered some estimates about the future. Somehow, he packed everything into 202 colorfully illustrated pages, no easy task. The result is a singularly informative tour of America's fragmented, contentious construction industry.

Should the stress and tumult of business weigh too heavily on you in the coming year, pick up this book. It will connect you to something bigger than your next project or financial worry, and you will feel some relief for it.

Deputy Editor Richard Korman, who edits ENR's commentary, has a B.A. in history from the State University of New York at Buffalo and is the author of "The Goodyear Story: An Inventor's Obsession and the Struggle for a Rubber Monopoly."