Plans to defend lower Manhattan against sea level rise are shaping up with a proposal to raise nearly a mile of waterfront and extend the shoreline as far as 200 ft into the East River.

The New York City Economic Development Corp. (EDC) showed on Nov. 17 its latest vision for the Financial District and Seaport section of the city’s coastal resilience strategy. It calls for construction of a multilevel waterfront along a mile-long stretch between The Battery and the Brooklyn Bridge.

As part of the plan, several piers and a heliport would have to be rebuilt higher in their current locations. The Whitehall Ferry Terminal, used for the Staten Island ferry, would also have to be reconstructed. The historic Battery Maritime Building, currently used for ferry service to Governor's Island, would be preserved but without ferry slips, and service would be moved to a new ferry terminal to be built next to it.

To prevent stormwater from flooding inside the flood wall, Roni Deitz, the urban and community resilience practice lead at engineering firm Arcadis, says the plan also calls for new drainage infrastructure, including a pump station.

The portion of land to be extended into the East River would be used for park and plaza space on the lower level, and the upper level may contain some single- or two-story structures including restaurants.

Proposals for taller residential or office buildings were removed following feedback on an earlier version of the plan, says EDC vice president Jocelyn Dupre. To accommodate for removing river habitat, the plan includes ecological preservation strategies like structured habitat to be built, and for the beach under the Brooklyn Bridge to be preserved.

The team designed the plan to work with or without the FDR Drive, an elevated highway along Manhattan's East Side that connects to the Brooklyn Bridge. Its removal and replacement with an at-grade road has been discussed, but not finalized.

“We know this is a defining feature along this waterfront,” Dupre says. “But we also know we cannot predicate achieving flood resiliency on taking down an elevated highway.”

Elijah Hutchinson, EDC vice president of waterfronts, says a climate resilience master plan for the Financial District and Seaport and an implementation roadmap will be released by the end of 2021. It is part of a larger resilience strategy to protect lower Manhattan in varying stages of development in several sections, including Battery Park City, The Battery and Brooklyn Bridge-Montgomery Street.

Areas north on the east side fall under the $1.45-billion East Side Coastal Resilience project, which broke ground earlier this year, while EDC points to the ongoing U.S. Army Corps of Engineers’ New York-New Jersey Harbor and Tributaries study for protection further north beyond Battery Park City on the west side. 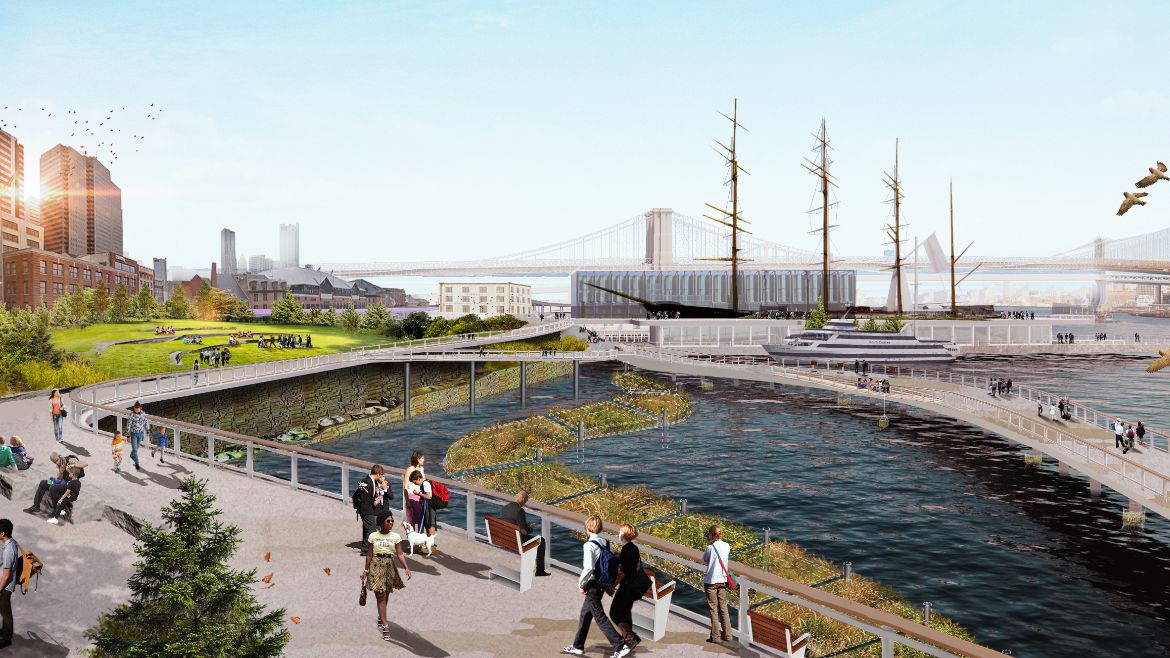 While the Financial District is in the future, Mayor Bill de Blasio announced in October that the city was allocating $110 million for a related proposed project from Pier 17 to the Brooklyn Bridge that would rebuild and raise the existing bulkhead and improve drainage. Hutchinson says the low-lying area is most vulnerable to rising tides. The goal is to complete that project within the next five years.

Plans to make Manhattan more resilient have already been years in the making, following extensive flooding caused by Hurricane Sandy in 2012.

In 2014, officials chose the "Big U" plan to ring the lower end of the island with parks and other green space as a new layer of protection against floods. That plan was later broken up into smaller pieces for implementation, and some sections faced additional changes to create taller barriers against rising seas.

Beyond storm surge, projections show sea level rise could lead to monthly flooding in lower Manhattan as soon as the 2040s, and daily flooding by the 2080s.

By 2100, Hutchinson says the daily high tide could reach three blocks inland if no action is taken.