This website requires certain cookies to work and uses other cookies to help you have the best experience. By visiting this website, certain cookies have already been set, which you may delete and block. By closing this message or continuing to use our site, you agree to the use of cookies. Visit our updated privacy and cookie policy to learn more.
Home » Reflective Coatings Deployed to Cool the Built Environment
ProductsSustainabilityMaterials
Products in Practice | Climate Resilience

In an effort to combat heat gain in urban areas and mitigate the effects of climate change, researchers in Arizona are evaluating reflective coatings for roadways.

A team from Arizona State University is working with the City of Phoenix’s Office of Sustainability and Street Transportation Dept. to study the cooling potential of a reflective pavement coating in a pilot program.

The goal is to combat the urban heat island (UHI) effect, the phenomenon where urban areas have higher temperatures than their surroundings due to the solar heat absorbed and later emitted by buildings and infrastructure. For the pilot, the city applied CoolSeal by GuardTop—a light-colored, water-based, asphalt emulsion sealcoat with 33% reflectivity, according to the manufacturer—to pavement already marked for rehabilitation across eight neighborhoods. The product was used on 36 miles of road and a public parking lot, “the most miles of road surface coverage with a reflective coating of any municipality globally,” the ASU researchers wrote in their report to the city issued in September. 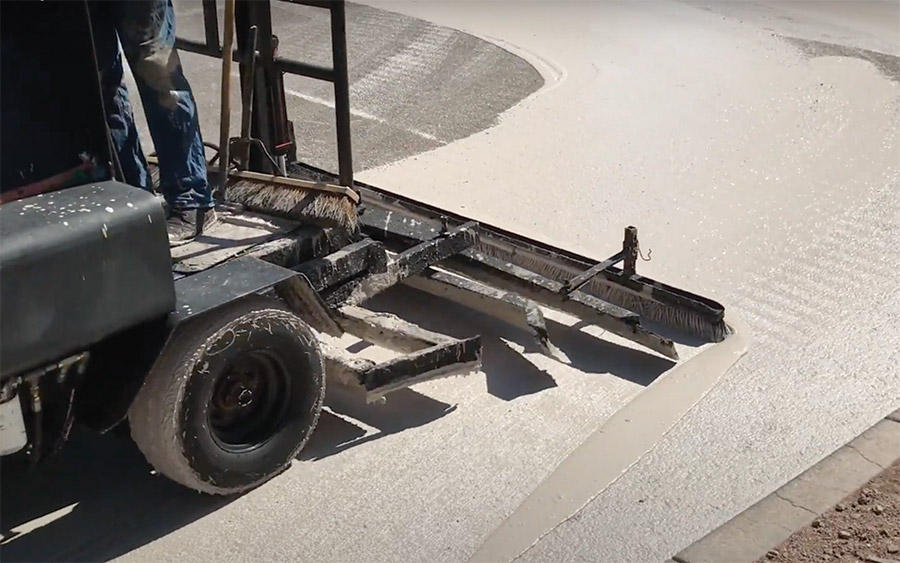 The City of Phoenix Street Transportation Dept. applied a light-colored, reflective coating to roads in eight neighborhoods across the city to study its cooling effects.
Image courtesy of the City of Phoenix

“With paved surfaces comprising about 40% of the urban land area in Phoenix, they are often considered one of the primary causes of the UHI,” wrote the authors. The ASU researchers spent a year taking and comparing air and pavement temperatures from treated pavement versus untreated pavement. The study found that subsurface temperatures below the coating were an average of 4.8° lower than in untreated surfaces over a span of seven to 10 months. They also found the long-term reflectivity of painted roads decreased over that period, to roughly 19% to 30%, from an initial 33% to 38%. But this was still higher than the 12% reflectivity of untreated pavement.

“This is exactly what we were hoping for,” said Phoenix Mayor Kate Gallego in a statement on the findings. “While there’s more work to be done, it’s exciting to see a technology that has the potential to meet the demands of a growing desert city in a world where temperatures are constantly climbing.” The pilot’s next phase will also study a darker coating with higher reflectivity, according to Street Transportation Dept. director Kini Knudson.

Working Toward the Whitest Paint

In another study, a white paint created by mechanical engineering professor Xiulin Ruan and a team of Purdue University students shows its true potential in how it performs. “Our analysis shows that during the summer months, using the paint on buildings can save up to 70% of the air conditioning cost,” Ruan said on a university podcast, citing results published in ACS Applied Materials & Interfaces in April.

The acrylic paint’s whiteness is owed to its high concentration of highly reflective barium sulfate, as well as the varying sizes of particles embedded in it. These particles scatter a wider spectrum of light, sending solar heat back into outer space, a process called passive radiant cooling. Ruan and his team focused on maximizing these effects. “When we started the project, about seven years ago, we had the energy savings and fighting climate change in mind,” Ruan said in a statement on the results. As he explained in the Purdue podcast, existing white paints are able to reflect 80% to 90% of the sun’s rays, with the remainder absorbed as heat—a rate Ruan says is too high to allow for proper cooling to take place. The paint his team developed can reflect up to 98.1% of sunlight. “If you were to use this paint to cover a roof area of about 1,000 sq ft, we estimate that you could get a cooling power of 10 kilowatts. That’s more powerful than the central air conditioners used by most houses.”

The Purdue team is now working to make the paint commercially available.

Top 200 Environmental Firms Gird for Headwinds, but Get a Surprise

Biden Administration Makes $3.1B Push to Expand US Battery Production