“We integrated this technology into a very complex facility,” says Shawn Moore, senior construction manager for renewables of The AES Corp., project owner. “Nobody has ever seen anything like it or built anything like it. This is a unicorn. We want to make buildings safer, more efficient, and it is a product that everyone wants to mimic in the industry. I think this project did a pretty good job setting the standard.”

The 100 MW—or 400 MWh—of energy storage from the facility allows California to set aside renewable energy for use during peak times and reduce reliance on fossil fuels. But constructing the project was as much about crafting a massive battery as it was a building, says Picasso Bhowmik, vice president of PNG Builders.

Moore says working on such a large project in a jurisdiction without a history of similar efforts required careful planning. He says the city’s inexperience helped AES and subsidiary Fluence showcase new technologies in energy construction—everything from flame and gas detection systems to the ability to shut down individual battery cores and isolate the building with gas and smoke exhaust systems and a proprietary water-injection system.

“I don’t think of this project any more as a building,” says Bhowmik. “What we did was build a huge battery, completely self-contained with its own heating and cooling and fire suppression. It is a huge, big battery sitting in Long Beach. It has never been done before.”

The project, with lead designer and structural engineer Bennett & Pless Inc., finished on time in just over 13 months despite ongoing challenges. The first real hurdle came in waiting for Fluence to finalize the choice of battery. While planning on the project started in 2014, the original plans for a three-story building with traditional heating systems were rethought when PNG Builders entered the fray. Settling on the LG-made lithium ion batteries didn’t happen until after the  start of construction. 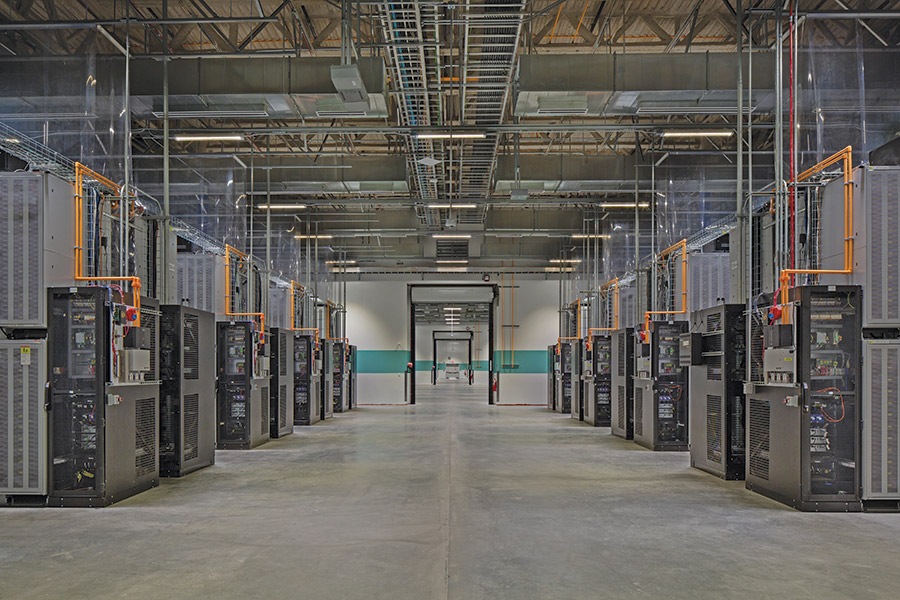 The entire BESS is referred to as the array. The array has 400 megawatt hours (MWh) of energy. Thirty-three inverters located just outside the array feed into a core of batteries inside the facility, which has 33 cores.
Photo by Martin King

“We didn’t know which battery the design team was going to use, so the design shifted to: ‘Let’s make it universal; let’s change how the building itself will change to house what is going in,’” says Joseph Caywood, project manager for PNG Builders.

Crews already were excavating and planning the foundation before they knew the final battery selection. “We realized early on we needed to increase the size of the foundation to allow for flexibility in the size of battery [options],” Bhowmik says.

Housing the batteries required a unique foundation. The site’s soil conditions were less than desirable, as the area was once water, then turned into developed land around the 1940s. The water table near the Pacific Ocean ended up being higher than anticipated, and PNG Builders opted for a floating slab instead of piles and piers, especially working with soils not native to the area.

A ground-penetrating radar study ahead of the project showed two large conduit tunnels the team had to bridge over and various buried obstructions, including stray pipes and railroad tracks. To handle the soil and wet conditions, PNG Builders brought in new soil that could mix with what was there and stockpiled existing wet soil to let it dry for months.

Techniques used under the slab included a dubbed “burrito wrap” solution, 2-ft-thick, crushed aggregate rock rolled up inside a geofiber fabric. The team executed this at the foundation’s deepest points, commonly the building’s perimeters, which required the heaviest inverter technology. The burrito wrap was placed into the shallow water table with dirt laid on top of it, allowing the water, when it rose, to percolate inside the gaps of the rocks inside the burrito without pushing up on the foundation. In shallower locations, crews used a geogrid mat that helped knit together the entire floating slab.

Throughout the project, the new systems required constant engineering solutions and design decisions that went to the last second of construction. While Moore says it was a challenging prospect from an owner’s point of view not to have everything lined up in a timely fashion, he credits the collaboration among all parties in keeping the project on schedule. 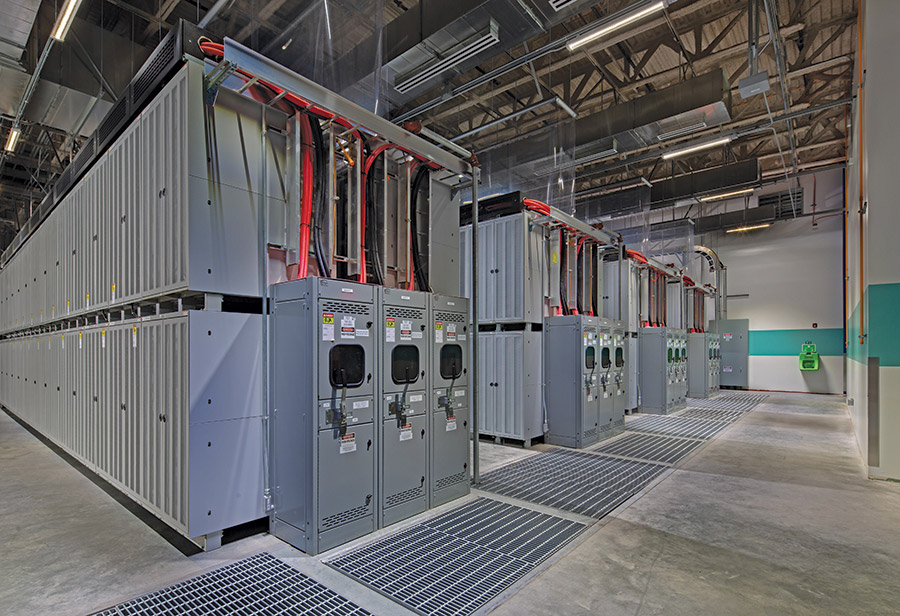 Each core of batteries consists of three nodes per core. Alamitos BESS has 99 nodes. Each node consists of 14 racks of batteries, totaling 1,386 racks overall.
Photo by Martin King

Changes to scale affected design across the project. For example, the rooftop cooling units increased in size almost tenfold from the original scope, changing the loads in the building. Add in the city’s requirement for more stringent fire protection—one solution included additional concrete around rooftop units—that isolated building components, and Bhowmik says there were “extremely technical decisions that came down to the last few days.”

Pandemic-related product delays also saw materials sitting on ships just off the nearby port for weeks.

“There were challenges, absolutely there were significant challenges, but if not for the teams involved it wouldn’t have been successful and been under budget and finished on time,” Moore says. “It was an extremely positive experience and a lot of fun.”

Being part of a project that will have a lasting impact for decades was special for Caywood. “I want to tell people about it,” he says. “It was an exciting project, a first of its kind, a new wave and to be part of something of this magnitude was just eye-opening.”