Agencies now must include vaccination requirements in contracts by Nov. 14

Millions of federal contractor employees must be vaccinated against COVID-19 by Dec. 8, according to Sept. 24 guidance from the White House Safer Federal Workforce Task Force. It instructs contractors to begin preparations to require most workers to prove they are vaccinated by that date—except for those able to qualify for what the guidance calls “legal accommodations” such as a disability or strongly held religious belief under federal law.

The guidance, sought by President Joe Biden in a Sept. 9 executive order, takes effect on Oct. 15 and must be an added clause in contract solicitations after that date and in contracts awarded on or after Nov. 14. For current contracts awarded before Oct. 15, agencies must include the clause when a contract option is exercised or an extension is made. Between Oct. 15 and Nov. 14, contract solicitations only must must include the clause.

Vaccine mandates rules do not apply to federal contracts or subcontracts valued at less than $250,000, the "simplified acquisition threshold" under U.S. regulation, and to those for manufactured products supplied, according to the guidance, but agencies are "strongly encouraged" to include them.  The mandate may apply to contracts valued below the threshold that relate to disaster recovery, defense and other work, the guidance says.

Contractor employees working at non-U.S. locations are exempt from the new rules, although other requirements may apply to them under Federal Acquisition Regulation (FAR) rules. Coverage does extend to employees who work "in connection with" federal contracts, such as those in human resources, billing and legal review, the guidance says.

The council responsible for the FAR system will develop the new clause for agencies by Oct. 8, “and recommends that [they] exercise their authority to deviate from the FAR using the procedures set forth” to apply the rules  to firms working under FAR-based contracts.

“We are watching this closely since it’s a ‘hard’ mandate with known dates that impacts firms of all sizes,” says Steve Hall, senior vice president for advocacy at the American Council of Engineering Cos.

“Clayco plans to follow the president’s directives and will implement a strategy as flexible as possible to keep everyone safe.”
—Russ Burns, CEO, Clayco Inc.

There is no exception for contractor employees who work in outdoor locations, such as those on federal project construction jobsites, who are covered by the guidance and must be vaccinated by Dec. 8, the guidance update says.

An outdoor exemption was requested by construction industry trade associations.

The contractor "is responsible for considering, and dispositioning, such requests for accommodations regardless of the covered contractor employee’s place of performance,” the task force said.

Contractors must provide physical proof documenting employees' vaccination status. Guidance now does not exempt contractor employees who have had COVID-19 from the vaccination policy and requires a contractor to designate one or more individuals to communicate policies to employees and ensure compliance. Contractors are not required to conduct workplace vaccinations.

The Sept. 24 guidance also sets mask-wearing and social distance rules for federal contractor employees, depending on their vaccination status, location and work activity.

It also "strongly encourages" firms to "incorporate similar vaccination requirements" for employees who are not working on a covered government contract but are at the same worksite as those who are. But areas where these two groups may intersect, such as meeting rooms, kitchens and dining areas, are considered "covered contractor workplaces" during contract performance unless firms can show there is no interaction.

Hall notes “uncertainty in how a company can successfully segregate employees” involved in intra-company project collaborations and teaming efforts with other firms, and in whether rules cover employees working on federal-aid projects and programs.

Also he says, "if several employees of a firm are opposed to the vaccination, it puts employers in a difficult position of having to decide how to retain a key member of their team to perform the contract for an important client."

According to Hall, "employers that follow the federal regulations and executive order still face the risk of a suit by the employee," noting a need for liability protection under the executive order and FAR regulations. "This issue is further complicated by local and state mandates also being rolled out, which add to compliance challenges," he says.

Jason Miller, deputy White House office of management and budget director, said in an accompanying blog post that the “guidance issued today advances one of the main goals of this science-based plan: getting more people vaccinated.”

The US Labor Dept. separately plans to issue an emergency temporary standard through the U.S. Occupational Safety and Health Administration that will require vaccinations or weekly testing of employees in firms with more than 100 workers, another measure Biden asked for on Sept. 9.

US Commerce Secretary Gina Raimondo said the emergency standard would be released in October, but there is a clause in the Task Force guidance that says that even if the standard conflicts with the new guidance, federal contractors “must comply with the requirements set forth in this Guidance regardless of whether they are subject to other workplace safety standards.”

Construction industry trade groups such as the Associated General Contractors of America and the Associated Builders and Contractors had urged the administration to take a less broad approach to federal contractors and asked that outdoor work not be subject to a vaccine mandate.

In a Sept. 16 letter to the FAR Council and the Task Force, AGC CEO Stephen Sandherr asked officials to consider exempting outdoor federal construction, claiming most work can be performed with a lower risk of spreading COVID-19.

In a separate letter dated Sept. 18 to Labor Secretary Marty Walsh and Acting Assistant Secretary of Labor James Frederick, Sandherr warned that broadly applying an OSHA emergency standard to all construction activities, as proposed by Biden’s executive order, could impede the goal of increasing vaccination rates.

He says many contractor employees will respond to mandated vaccinations by quitting firms doing federal work or seeking jobs with those that have fewer than 100 employees. 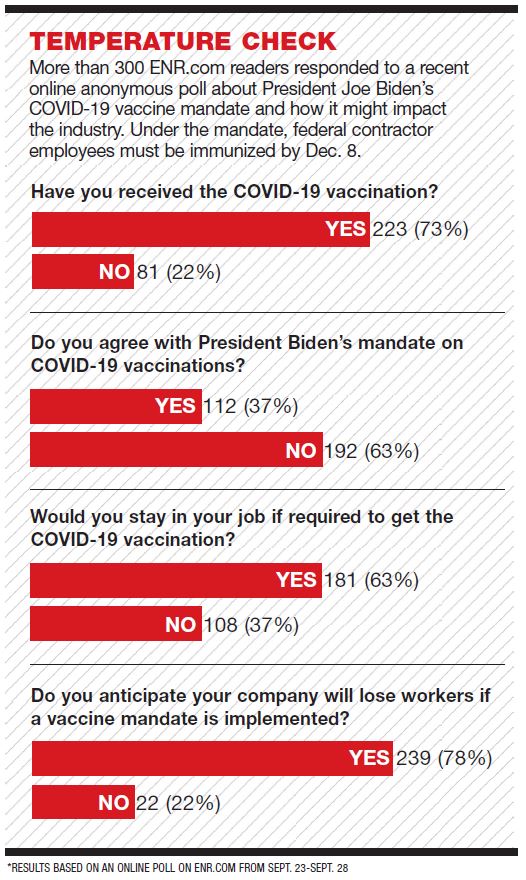 Chris Carson, president and COO of Carson-Mitchell Inc., in Springfield, Mo., estimated that about half of its field employees have been vaccinated, roughly in line with the state 47.1% vaccination rate as of Sept. 21 and with the industry-wide rate for construction, according to a study by Carnegie-Mellon University.

The company has taken precautions such as enforcing social distancing, but Carson said he was unsure how many workers would agree to get vaccinated.

He added, however, that even if the government guidance did not include a vaccine mandate for federal contractors, company customers such as hospitals may require workers on-site to be vaccinated against COVID-19, as they do with other common inoculations, Carson noted.

“I’m trying to get on the same page, but I haven’t seen a unified voice come out yet from the industry,” he said. “It’s a tough place to be in.”

Carson said he expects to lose some employees to any vaccine mandate. Many of them have other options beyond the industry, such as farm work or property maintenance in the southern Missouri and northern Arkansas area that his employees live in.

“We’re a medium-sized contractor in a great big economy,” Carson said. “So we’re in a wait-and-see approach, because we really don’t have any other choice.”

Russ Burns, president and CEO of Chicago-based design-build contractor Clayco Inc., said that “in line with the President’s announcement,” his company will soon announce an extension to its full workforce of an existing vaccination requirement for office workers.

“We are not sure on a timeline yet, but I am sure we will have a grace period to ensure the proper steps are taken to make this a success,” Burns says. “Clayco plans to follow the President’s directives and will create and implement a strategy that will be simple and as flexible as possible to keep everyone safe.”

The FAR Council will need to amend its current rules to fit such a broad vaccination mandate, with a rulemaking underway to include the new guidance for covered contractors and subs performing under FAR-based contracts.

“If the FAR Council were to adopt this guidance, it would be very difficult to comply with,” said Brian Turmail, AGC vice president. “It is also not clear that implementing this guidance would be lawful. We look forward to working with the Council as they craft guidance that will address worker safety without imposing undue and possibly unlawful, burdens.”

Ben Brubeck, ABC vice president of regulatory, labor and state affairs, said the group "will be reviewing the guidance carefully with industry stakeholders to understand its full impact and unintended consequences. However, based on our initial reading, this guidance will result in additional compliance burdens, exacerbate the construction industry’s skilled workforce shortage and increase costs for federal contractors and taxpayers."

ABC plans to participate in the FAR Council rulemaking process "and will be fully engaged in the forthcoming OSHA [emergency standard] rule applying to all employers with 100 or more employees," he said.