For more than 60 years, California officials and experts have discussed expanding the Sacramento River bypass and levee system.

The original system, designed in response to two floods in 1907 and 1909, was completed in 1955 and tested that year by its largest flood to date. Three more major floods, including the largest on record in 1986, demonstrated that more floodwater capacity and protection should be built into the system.

In summer 2020, contractors broke ground on the first project to expand that capacity, the Lower Elkhorn Basin Levee Setback (LEBLS) project. The California Dept. of Water Resources is leading the design, construction and permitting of the $103-million project, which will widen the Sacramento Bypass and the east side of the Yolo Bypass.

In the process, DWR is setting back five miles of the east levee of the Yolo Bypass and all two miles of the north levee of the Sacramento Bypass. The two levees form an “L” shape that will be set back about 1,500 ft. DWR is working closely with the Sacramento Area Flood Control Agency (SAFCA), which received a $25-million contract for the interior drainage and pump station work.

“Something was identified as a problem in 1955, and it’s taken a long time and a few more flood events to let the engineers know that the ’55 event wasn’t the exception, it was the norm,” says Dan Tibbitts, principal engineer and project manager with SAFCA.

The LEBLS project is the first one to come out of the state-legislated Central Valley Flood Protection Plan completed in 2012, Tibbitts says. The plan aims to increase the bypass system’s capacity while strengthening the area’s ecosystem and climate resiliency. DWR is also working with federal fish and wildlife agencies and the local reclamation district.

This project will double the capacity of the Sacramento Bypass, add about 60,000 cu ft per second of capacity to the Yolo Bypass and add hundreds of acres to the floodplain in the bypasses, says David Pesavento, DWR senior water resource engineer and project manager. Several improvements have strengthened the flood control system around Sacramento, but LEBLS is the first project to add more floodwater capacity.

The project is extensive: The team must move more than 5 million cu yd of earth over more than 700 acres of land. Earlier this year, the team completed 800 ft of levees, the embankment for the new pump station and new basins and culverts, Pesavento says.

“We learned when something’s different than we expect, let’s completely scrap our estimate, forget what we thought we knew and just build it the way we think we can build it.”
—Jared Williams, Project Director, Forgen

General contractor Forgen LLC was excited to join in, says project director Jared Williams. “We saw this job as a unique earthwork job, and we do a lot of wetlands work.”

Fed by the Klamath Mountains to the north, the Sacramento is a “perched” river, with natural levees that set it higher than the valley floor. In high-water events, the river naturally rises and overflows its banks into the floodplains on either side.

The region’s earliest settlers built structures to control this cycle, and now the flows are shunted into a system of bypasses designed to capture much of the Sacramento River’s water.

The LEBLS project’s biggest engineering challenge relates to soil conditions. Much of the area is full of “fat clay” that wouldn’t ordinarily meet the Army Corps of Engineers’ standards for levees, says Pesavento. But trucking in millions of cubic yards of more suitable soil would have driven up costs and exceeded the project’s emissions standards.

As a result, the LEBLS team is digging up soil from the area between the current and future levees for construction. Once the new levee is built, the team will demolish most of the original levee and use that material to restore the dug-out spaces. The clay offers different building challenges depending on its moisture content. It swells during the area’s winter rains, then shrinks as it dries and creates desiccation cracks, with some 7 ft deep.

“With too much water, the clay gets very slippery, almost like modeling clay,” Pesavento says. “If it’s too dry, it gets very hard, with jagged edges, and you can’t get the compaction you need.”

Forgen has adapted to the challenge, says Williams. When the company bid on the job last summer, its team expected to build with already water-saturated clay. But the region’s current dry conditions required a moisture-adding approach instead.

“We started with water trucks, pivoted to sprinklers, then to outright flooding,” Williams says. Drainage ditches run for miles, fed by wells locally obtained by DWR. ”We learned when something’s different than we expect, let’s completely scrap our estimate, forget what we thought we knew and just build it the way we think we can build it.”

Engineers designed the new levee to accommodate this clay. The 100-year-old current levee, with its more common 2-to-1 or 3-to-1 side slopes, has seen multiple failures (but not breaches), with a portion of the slope sliding or falling down, Pesavento says. The new levee is wider and flatter: 28 ft wide at the crown with 4-to-1 side slopes. Once the levee is completed, the Army Corps of Engineers will expand the Sacramento Weir, completed in 1916, to allow more water into the bypass during floods. 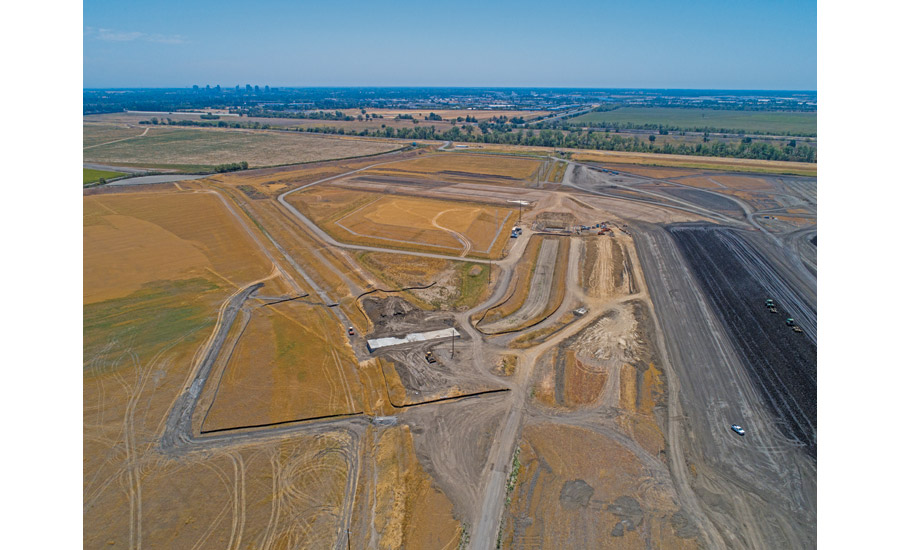 The LEBLS project is a multi-benefit project by DWR that balances the need for infrastructure and flood protection.
Photo by Florence Low, courtesy California Dept. of Water Resources

The levee’s designers also had to consider erosion control, since the region’s southwesterly winds can cause wave wash against the levee. Placing rocks to protect the levee sides wouldn’t do because new vegetation would cause environmental and operational problems. Instead, the team is using tied-concrete-block mats to protect the levee—little concrete blocks placed and cast into a synthetic material to hold them all in place, Pesavento says.

“Once we’re finished placing the levee, we’ll place those mats, then grow perennial native grass on the levee,” Pesavento says. The team started growing grasses on such mats in test plots last year to find the best way to cultivate this grass cover, which will stabilize the top of the levees and choke out invasive species such as thistles.

The basin is a popular area for migrating birds such as Swaison’s hawk, he says. Yolo Bypass itself is included in the Pacific Flyway which provides stopover points for migrating birds. The DWR is also researching how fish can thrive on the river’s floodplains as well as the main stem. Remnants of the old levee will create hiding and resting spaces for animals such as the giant garter snake.

Designing and building the LEBLS project required years of planning and coordination among competing interests, Pesavento said. The floodplain and river not only must handle high-water events, but they also must support native plants and wildlife as well as recreational uses and water supply storage. To ensure all interests are considered and protected, DWR is partnering with the Yocha Dehe Wintun Nation, a local Native American tribe, as well as agencies involved in flood protection, conservation and the environment.

The state and other agencies also plan to set back levees and bypasses in the Upper Elkhorn Basin and the two-mile-long Fremont Weir as well as points further south. These capacity-expanding projects are still in the study phase and will include a combination of federal and state participation, along with DWR and local entities such as reclamation districts and SAFCA.