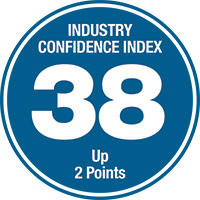 It has been six months since the COVID-19 pandemic began to make itself felt across the U.S., and industry firms now are beginning to believe that the resulting market downturn will not begin to recover for another year. Further, industry executives believe that some market sectors will be a long time in returning to prosperity.

The concern about the emergence of COVID-19 can be seen in the results of ENR’s latest Construction Industry Confidence Index survey. The index, which had plunged 20 points to a 36 rating in the second quarter of 2020, only gained two points to a 38 rating in the third quarter. The current CICI ratings are comparable to 2010, when the industry was struggling to recover from the financial meltdown of 2008.

The index measures executive sentiment about the current market, where it will be in the next three to six months and over a 12- to 18-month period. A rating above 50 shows a growing market. The measure is based on 303 responses by industry executives to surveys sent between Aug. 14 and Sept. 21 to 6,000 U.S. companies on ENR’s lists of leading general contractors, subcontractors and design firms.

One surprise was the CICI numbers for the overall economy, which gained 13 points from a 32 rating in the second quarter to a 45 rating this quarter. However, as construction is a lagging economic indicator, most respondents believe the industry recovery will be slower.

Another barometer is the soon-to-be-released results of the latest Confindex survey from the Princeton, N.J.-based Construction Financial Management Association (CFMA), which shows that chief financial officers are worried about the near term but believe that the end of 2021 will see a rebound.

Each quarter, CFMA polls 200 CFOs from general and civil contractors and subcontractors about markets and business conditions. The Confindex is based on four separate financial and market components, each rated on a scale of 1 to 200. A rating of 100 indicates a stable market, while higher ratings indicate market growth.

“The Confindex was unchanged from an 87 rating in the previous quarter,” says Stuart Binstock, CFMA’s CEO. The “business conditions” component of the Confindex also was unchanged from the previous quarter at 71, reflecting the concern about the current market. The “financial conditions” component gained only one point from 99 to 100, while “current conditions” dropped from 83 to 79. On the other hand, the “year-ahead outlook” rose from 91 to 99.

Binstock notes that CFMA’s Confindex survey also asked how long CFOs believed it would take for the market to recover from the COVID-19 downturn. Of the CFOs surveyed, 25.6% believed that the market is already beginning to recover and another 19.2% believe the market will be recovering a year from now. However, 47.2% said it would take one to three years to regain momentum, he says.

The current market prospects are on the front of everyone’s thinking at this point. In this quarter’s Confindex, 49% of respondents said they were “very concerned” or “highly concerned” about the availability of work in the near term. “This marks the first time in our survey that labor availability has been supplanted as the greatest concern among CFOs,” says Anirban Basu, CEO of economic consultant Sage Policy Group, Baltimore, and a CFMA adviser. He notes that 40% of respondents said staff shortages were a major concern, down from the 80% range in previous quarters.

While the availability of work is a concern, Binstock says there have been few comments regarding increasing competition for jobs in the Confindex survey. However, Basu says that he has heard anecdotally of competition getting more fierce as the downturn lengthens.

Clearly, industry executives believe the market currently is declining as a result of COVID-19 and what it has done to the economy and expect recovery from the downturn will take some time. Most firms are relying on large backlogs from the boom years to get them through until the market bounces back, and they are scrambling for new opportunities. “Now is the time for firms to streamline their processes and become more efficient,” says Basu. He says COVID-19 has forced firms to rely more heavily on technology to improve productivity.

As for a recovery, Binstock is cautiously optimistic. “Our members believe that we’ve hit the depths of the downturn and believe that 2021 will slowly improve prospects,” he says.