“La tacita de oro” was the nickname by which the city of Colón was once known--Panama’s "little golden cup."

The historic city on the country’s Atlantic coast was a landing point for 19th-century gold prospectors seeking to get to California quicker by rail across the narrow isthmus of Panama and north via the Pacific Ocean. It gained further prominence with completion of the Panama Canal in 1914, in its position as a strategic U.S. military zone until 1999 and by creation of a global free trade zone in 1948 that now is the world's second largest.

Despite these beginnings, Colón became what many deemed Panama’s poorest and "most conflicted city," with a sharp decline in quality of life over the decades spurred by a massive 1940s fire and migration of wealthy residents to Panama City.

Poverty, unemployment and violence continued to be major issues—with many of its now more than 76,000 residents and its businesses in substandard spaces and enduring an antiquated and collapsed urban sewage and rainwater control system in the tropical climate.

Panama sought to address the inadequacies in 2014, with then-president Juan Carlos Varela committing to what was announced as a $1.2-billion "public and social works" investment.

The national housing ministry awarded a $650.8-million contract a year later that would launch what became a multi-pronged urban renewal.

Winning the contract was Consorcio Nuevo Colón—a construction joint venture of Brazil-based Construtora Norberto Odebrecht and Constructora Urbana SA (CUSA), Panama City, that would lead a team over the next five years to execute the overhaul. Odebrecht has a 56% JV share in managing primary building construction, with CUSA securing a 44% stake to perform key environmental system upgrades and other infrastructure work.

The program includes restoration of the first nine residential structures in a high-crime area, modernization of an eight-decade-old municipal market and construction of a new planned community of mid-rise structures with a total of 5,380 two- and three-bedroom apartments and other amenities in a 193-acre greenfield area east of the city.

Work was performed in a climate and geology that compounded infrastructure insufficiencies and created key construction challenges.

Colón was built on a swampy island later linked to the mainland by the 19th-century railroad. It receives about 130 in. of rain per year, more intensively over eight months. The team also had to work in the prevalent Gatún soil, which is “like rock, but when you excavate, it degrades,” says Carlos Fabrega, CUSA vice president, adding that “as soon as you excavate, you also hit the water table, so there was a lot of pumping.”

The team “developed a solution based on the foundation slab” that ensured that building foundations could absorb soil settlement, says Yesica Aguirre, Odebrecht's project engineering lead. Concrete was designed in partnership with Mexican materials giant CEMEX to create a mix that would have “resistance and workability in the material's freshest state,” she adds.

The city’s intertwined sewage and stormwater system, designed by the U.S. Army Corps of Engineers during original canal construction, led to many problems.

A 2004 upgrade did not fully separate the systems, he found, leading some domestic connections to discharge into the older system and some into the newer one, as well as exchanges between them that generated more surface pollution. With sewerage station pumps unable to handle flows, “raw water running in the streets was a day-to-day situation,” de la Rosa says. 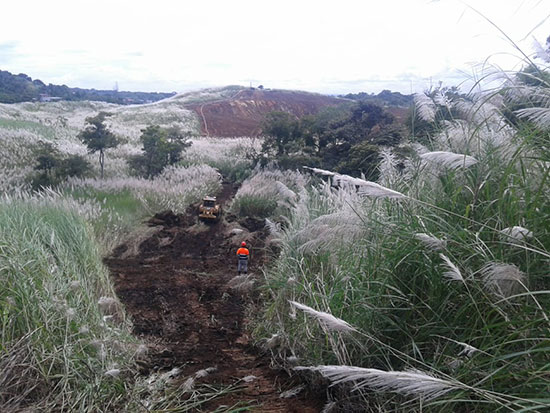 Former 193-qcre greenfield site east of Colón, once part of a US military base, was cleared for a giant housing complex. Photo: CUSA

"We wanted spaces that would break with the fear," says Liliana Lopera, founder and CEO of project design firm Gestión Urbana. "All the urban spaces were designed with consideration of inclusion and resident participation, and certain architectural elements, such as stairs and building windows, were designed to provide visibility, creating trustworthy and safe spaces for a vulnerable population with social problems.”

Design also sought to reflect a strong sense of culture for residents “through use of symbols, color on building facades or elements from their music and folklore,” she adds.

Building facades were replaced while structures were occupied.

With a need to engage city dwellers in supporting the construction in their midst and with local interest in work opportunities, the JV trained residents in key craft trades, says Tito Serra, an Odebrecht executive director and overall project manager.

As a result, Colón inhabitants made up 95% of the project’s nearly 3,600-person workforce, 2,000 overseen by CUSA on infrastructure, with workers gaining career skills through more than 155,000 hours of project-delivered training.

“They became like partners in the construction,” Serra says of residents, “not only because they started working with us, but because they had to buy [into] these renovations.” Training made up close to 1.5% of the project’s 14.1 million work hours, says the submission.


Educating for the Future

Tenants of the Altos de Los Lagos planned community were required to participate in at least one education module.

The Altos project rose on a tract that had been dense tropical forest once part of the U.S. canal zone military base. Work included demolition of old concrete ammo storage facilities, says Fabrega.

With just four months each year outside the rainy season, time was short for earthwork and laying foundations for residential buildings as well as the supporting safety, educational and recreation facilities.

Foregoing a conventional approach, the team instead used a type of metal formwork system, says Serra. Following a strict schedule, crews would install building formwork, place the custom concrete mix and remove forms the following day, allowing inexperienced workers to quickly learn skills through repetitive action. “The idea was to close the building fast so you could go inside for your finishes,” says Serra.

Team members also traveled to fabrication facilities in Brazil, China and the US "to ensure quality and timely delivery," says the team.

Design and other work had to meet 17 U.N. sustainable development goals, which included building orientation for more cross-ventilation and natural light to reduce power use. “The DNA of the project was to achieve all of the U.N. goals,” says Aguirre.

Design aspects include replicating in the new development historic symbols of old Colón such as the central walkway of the city center, adds Lopera.


Getting to the Finish Line

While the new community was built in 49 months, says the team, the overall project faced key completion challenges, delayed at least two years by logistical challenges and multiple agency bureaucracy as well as oversight by outside consultants from five other countries.

Public upset with slower than hoped for progress prompted a 2018 citywide protest that shut down public transportation.

Ethics violations also enveloped Odebrecht in Panama and elsewhere as the project unfolded, with the firm settling bribe charges of public officials in several countries, although there is no evidence of links to the Colón project. “Of course what happened took all of us by surprise,” says Serra. “I tried to be open and transparent with my team.”

He adds, "I believe that all this brought us together as a team, as professionals, as individuals. It was tough moments where you see your name in almost every newspaper, or on TV news., but we were sure that our best answer is our work ... and how we change the communities. This was our motivation.”

Work is now largely finished, although Fabrega says COVID-19 issues have delayed transfer of some facilities to government management and new contract awards are underway for about 1,600 new Altos do Los Lagos units and adds to environmental infrastructure.

But the overall impact of the Colón renewal on its citizens is clear.

“The project of reconstruction was not only structural, but it sparked change in people as they learned to live in a renewed environment. Not living overcrowded requires retraining," says Argenida Dumanoir de Barrios, a community leader and University of Panama-Colón professor. “It was a psycho-social renewal—renewing buildings, landscapes and mind, body and spirit. Odebrecht and CUSA delivered not only a project, but hope.”