The electric utility industry is in the midst of an unprecedented disruption. The model that reigned for a century is being challenged and replaced by new technologies, such as digital feedback and control systems, a proliferation of distributed energy technologies, such as solar panels and energy storage, and new regulatory policies and mandates.

These new technologies and policies are being deployed across the industry just as utilities are experiencing a range of natural disasters: wildfires in California, hurricanes along the Atlantic seaboard and the Gulf of Mexico, and record floods in the Midwest.

In response, many utilities are reinventing themselves to become “the utility of the future.” In many cases, their plans do not call for incremental change or tweaking established processes, but instead entail a new business model delivered with new tools and capabilities that fall under the broad heading of grid modernization.

Compared with past practices—in which some utilities simply replaced like with like—grid modernization can appear to be overbuilding, but “today, utilities have to build to a new level of uncertainty,” says Joey Nichols, utility consulting manager for 1898 & Co., part of Burns & McDonnell. “The distribution system is being asked to do things it wasn’t designed to do 30 years ago.”

The definition of grid modernization varies as state regulators push different policies or sign off on different utilities’ grid-modernization proposals. Broadly, grid modernization includes a variety of activities designed to make the electric power grid more resilient in order to reduce the frequency and duration of power outages, or make the grid smarter in order to accommodate changes, such as power flows from solar panels, batteries and electric vehicles.

“Grid modernization can include anything from replacing poles and wires to grid hardening to adding intelligence or communications capability to existing assets,” says Meghan Calabro, director of distribution modernization at Burns & McDonnell.

Those actions can translate into billions of dollars of capital investment and are part of a long-term trend. Annual spending by major utilities on distribution projects, which often involve grid modernization, has risen 54% over the past two decades to $51 billion, from $31 billion, as utilities upgrade aging equipment, according to the U.S. Energy Information Administration, a part of the Dept. of Energy.

In March, the Indiana Utility Regulatory Commission approved Indianapolis Power & Light’s (IPL) request to invest $1.2 billion to modernize its grid over the next seven years. Most of the plans involve the upgrade and replacement of aging equipment such as transformers, breakers and equipment at substations, as well as the installation of smart meters, technology to allow the utility’s grid to sense faults and bypass or propose a bypass for the circuit, and equipment that will lay a foundation for the integration of electric vehicle charging stations.

“Today, utilities have to build to a new level of uncertainty. The distribution system is being asked to do things it wasn’t designed to do 30 years ago.”

Distribution network improvements are also the focus of FirstEnergy’s grid-modernization plans approved in Ohio, where the utility company plans to invest more than $500 million by 2022.

In Pennsylvania, FirstEnergy’s Energizing the Future program calls for the upgrade of existing transmission lines with equipment designed to reduce the occurrence and severity of outages. The utility said it would invest more than $1 billion a year on transmission upgrades between 2018 and 2021.

FirstEnergy also won regulatory approval in January to spend $572 million over the next five years to accelerate distribution infrastructure projects that in some states would be considered grid modernization.

Any single effort under the LTIIP umbrella may not be an enormous construction project, but the overall scope is large. West Penn Power, one of FirstEnergy’s four Pennsylvania subsidiaries, is spending $21 million over the next five years to install “thousands and thousands” of fuses to its distribution and feeder lines, spokesman Todd Meyers says.

The fuses are capable of segmenting a line that serves, say, 3,000 customers, so that an electrical pole taken down by an ice storm or an auto accident does not leave all those customers in the dark. Adding fuses to the system increases its ability to isolate and bypass problems, limiting the effects to hundreds, instead of thousands, of customers. West Penn’s goal is to segment its lines into blocks of 30 or 35 customers.

FirstEnergy’s projects in Pennsylvania would not be happening with the same rapidity without the legal framework put in place with the state’s Act 11 of 2012, which allowed for a Distribution System Improvement Charge.

One effect of the DSIC was to reduce regulatory lag associated with traditional base rate cases to help utilities adapt to a changing landscape with dexterity and flexibility.

It was the DSIC that enabled FirstEnergy to create its LTIIP program, which “allows us to make more investments without waiting for full-blown rate case to recover costs,” Meyers says. Instead, when a utility wins approval for a portfolio of projects, it is allowed to recover costs as it goes along, improving its cash flow and investment profile.

In Chicago, Commonwealth Edison’s grid modernization efforts were precipitated by the state’s passage of the Energy Infrastructure Modernization Act in 2011, which paved the way for the utility to spend $2.6 billion on grid improvements, with half of that going to infrastructure upgrades—including an underground cable system and a 69-kV transmission line—and half to smart grid upgrades, including distribution automation and advanced metering infrastructure. ComEd followed that with its Grid Resiliency Investment Program, and now plans to build on that foundation. 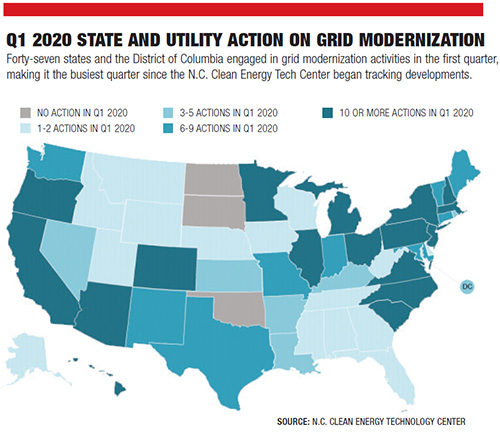 “How do we continue to drive resilience?” asks Cheryl Maletich, senior vice president of transmission and substations at ComEd, a division of Exelon. “How do we make sure we can withstand and recover from any disruptive event from Mother Nature or anyone else?”

As the utility looks at new programs, grid modernization has been incorporated into its planning process. “We are really looking at it from a holistic standpoint,” Maletich says. That could include replacing wooden utility poles with steel poles or digitizing and upgrading communications at its substations.

A holistic approach is key to grid modernization. “It doesn’t make sense to add intelligence to the grid if poles are falling over,” says Calabro. But, she adds, “It is often incredibly difficult to get regulatory support or even support within an organization. To get everyone on the same page and marching in the same direction on what grid modernization looks like is a really big challenge.”

On the distribution side, utilities have historically tried to right-size the grid, to build to exactly the size they've needed, Calabro adds. “We are trying to encourage them to focus on almost overbuilding and to come up with a tight set of standards.”

The future is uncertain, but it will almost certainly include even higher penetration of distributed energy resources such as rooftop solar panels and energy storage devices, as well as a rising number of electric vehicles and EV charging stations that will put new strains on the grid.

In the context of grid modernization, a piecemeal approach does not make sense, Nichols says. “Synergies can be lost, and organizations become inefficient.”

What looked like overbuilding in the past is right sizing today and, he says, doing it now is likely the most cost-efficient approach.

Entergy, with utilities in Louisiana, Arkansas, Mississippi and Texas, also approaches grid modernization holistically. Its efforts date back to 2015, shortly after the utility had passed its 100th anniversary. “We were thinking about what it would mean to be the utility of the future,” says Erica Zimmerer, director of grid modernization at Entergy.

It became clear that a traditional, segmented approach would not work. The new capabilities the utility was looking at were interdependent. Installing advanced meters required upgrading its communications network, which didn’t make sense without upgrading poles. And none of it would make sense without first making changes to about two-thirds of Entergy’s construction standards. For instance, the company changed the strength and height of its poles. The change in installation costs are slight, but the poles are stronger and require less material. The company also consolidated the size of its conductors, making procurement simpler and simplifying inventories and logistics for workers in the field.

“The investments began to complement one another,” Zimmerer says. Entergy expects to complete its $900-million investment in advanced meter communications work by the end of 2021 and its $400 million worth of distribution automation work in 2024. Rather than replace existing designs, “we are designing for the next 100 years,” says Zimmerer.

US Dept. of Energy Is Funding Grid-Interactive Efficient Building Projects

Viewpoint: Why Uncertainty Is a Critical Factor in Designing for Disaster