Bolstered by a series of strategic acquisitions broadening its array of in-house capabilities, along with a major investment in modular construction, long-time design-builder Haskell is now embracing an all-of-the-above project delivery approach as it pursues a plan to nearly double annual revenue by 2025.

Such a leap would be impressive even during ordinary times. The Jacksonville, Fla.-based firm reported 2019 revenue of nearly $1.1 billion from construction and $91.2 million from design work, according to data submitted to ENR’s 2020 Top 400 survey. Achieving such growth while navigating a construction economy that’s still being buffeted by massive pandemic-induced uncertainty would be an enviable achievement. For now, at least, the company maintains that its five-year plan, announced before the coronavirus pandemic struck, remains unchanged.

Despite the current situation, CEO Jim O’Leary and team seem intent on finding out what’s possible. Picked as successor to long-time CEO Steve Halverson after a three-year selection process, O’Leary—who has worked for Haskell for more than 30 years—was announced as the firm’s president and chief executive officer in 2018.

By fall of that year, O’Leary was unveiling his plan, which places Haskell’s revenue goal toward the bottom of a list of six initiatives. The audaciously idealistic goal to “provide team members with the best job of their lives” takes the top spot.

That people-first focus carries over the long-time leadership of company founder Preston Haskell, who tells ENR that he repeatedly emphasized “recruitment, retention and development” of employees.

According to the company, which is privately owned, Haskell’s ownership structure “currently rests with the management team and an [employee stock ownership plan] that was established in 2008. All full-time employees are shareholders as part of their inclusion in the ESOP.” It remains common for Haskell employees to have been hired “straight out of school,” adds John-Paul “J.P.” Saenz, chief operating officer, O’Leary’s former position.

Halverson, who is currently chairman of the board, says it was O’Leary’s commitment to Haskell’s existing culture that was “the real reason” he got the job. “I believed and the board believed that Jim would be the most protective custodian of company culture and values—the most important thing a CEO does,” Halverson says.

Still, O’Leary sought a reboot. “It was important to hit the reset button and establish what we want Haskell to look like in 2025—to make it aspirational and something that people can connect to,” he says.

The goals include “driving operational excellence,” diversifying the business, strengthening the firm’s engineering and design expertise, and expanding diversity, among others. O’Leary speaks passionately about his belief that if the company delivers on the separate goals of his 2025 plan, employees can find great satisfaction via a meaningful career at Haskell—like he has.

The company’s staff understands that O’Leary’s commitment to this goal is “genuine in every respect,” says Dave Balz, vice president of workforce development. “He deeply believes Haskell should provide team members with the best job of their lives,” Balz says. “This is well understood and consistently reinforced across all levels of the business.”

Over the past decade, Haskell has executed strategic acquisitions to expand capabilities roughly every two years. At the same time, the long-time design-builder has gradually started using other project delivery methods that it often didn’t opt for in the past, such as construction management-at-risk.

Haskell’s ongoing expansion of services and capabilities and its more varied approach to project delivery is not yet well known to all its competitors. One executive with another Southeastern contractor told ENR: “My impression is that Haskell may be coming around to being less concerned about having to do the design” and is opting for a wider range of project delivery approaches.

“It was important to hit the reset button and establish … what we want Haskell to look like in 2025.”

The expansion of its in-house expertise started in 2010, with the purchase of E2M, an Atlanta-based manufacturing system integration firm that was absorbed into the company. Since then, the acquisitions have remained independent while still functioning as part of Haskell. In 2012, Haskell acquired Seiberling, adding expertise in process engineering, technical consulting and automation for food and beverage and biopharma projects. A 2014 acquisition of Freeman White and Catalyst added health care design and consulting experience. And the 2016 acquisition of Benham added expertise on engineering-procurement-construction (EPC) project delivery in the food and beverage and consumer products sectors.

Additionally, in May 2019, Haskell made a strategic investment—of an undisclosed amount—in BLOX, a Bessemer, Ala.-based prefabrication specialist with roughly 400 employees that describes its methodology as “design-manufacture-construct.”

A main focus of Haskell’s growth strategy, though, falls upon its industrial projects, specifically its largest market, food and beverage. The contractor, which ranked seventh among ENR’s 2020 Top 400 ranking of industrial contractors, reported approximately $557.2 million in 2019 construction and design revenue from industrial processing projects. Of that total, domestic projects generated $515.87 million in revenue, while international jobs provided the remaining $46.7 million.

Here, too, Haskell believes that its expanded roster of skill sets, most particularly its expertise in process engineering and EPC project delivery, will boost its bottom line. Attaining this goal has been a focus since 2008, when Haskell first eyed acquisition as a means to capture more of the capital expenditure of food and beverage project owners, says COO Saenz.

“In most of these situations, that [process engineering] portion of the work was usually two times the contract volume of the work we were performing,” says Saenz. “There was this great opportunity sitting out there.” In-house expertise “quickly changed our food and beverage business,” he adds.

A recent contract to deliver a can line—capable of producing 1200 cans per minute—for LiDestri Food and Drink offers an example of the potential opportunity for Haskell. Stefani LiDestri, CEO of LiDestri Food and Drink, says Haskell’s “diverse knowledge and resources” aided her firm’s selection of a contractor. Specifically, Haskell’s “ability to field manage under the direction of their own in-house engineering … allowed us to move forward with equipment purchases in a timely manner with the full confidence that they would be able to coordinate the design and installation.”

By the time it acquired Benham and its EPC delivery experience, Haskell was seeing “an opportunity to provide services on a stand-alone basis not always integrating all the services,” Saenz says. “For some clients, that’s the nature of how they procure the service. Some of them are not going to buy all services bundled into a design-build or EPC contract.” 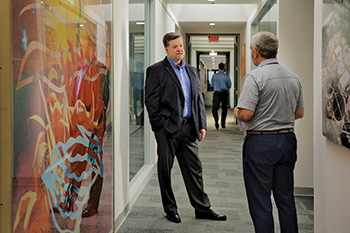 CEO O’Leary seeks to engage Haskell’s work force, while keeping social distancing in mind.
Photo by Bob Self for ENR

Saenz adds that the four divisions that Haskell acquired continue to develop their own client relationships, which have “many times” evolved into integrated delivery contracts in the future.

Internally, Haskell’s food-and-beverage projects fall under its consumer and package goods (CPG) division, which covers “pretty much everything you can buy at a Walmart,” says Michael Woods, who leads the group. The ability to deliver process engineering for packaging, automation and both wet and dry processes has brought new opportunities.

“By having that differentiation, we’ve been able to expand from lump-sum contracts to services-only contracts, construction-management contracts,
design-build contracts or EPC,” Woods says. “We grow the business by not saying no.”

Though regularly ranked as one of the top contractors in the food and beverage sector—it ranked No. 2 in ENR’s most recently published ranking—there remains considerable room for growth, Woods says. Based upon the firm’s estimate of the global annual capital expenditure for food and beverage facilities, “We’re still a low single-digit percentage of the market share,” he says. “That tells us that there’s tons of opportunity out there.”

As is the case with other construction markets, the global coronavirus pandemic is causing uncertainty in this sector, too, as owners pause to reconsider their capital expenditure plans. “From a global perspective, we think that the addressable market is much much larger than our capacity to serve,” Woods says. “We look at it as continued untapped opportunity.” 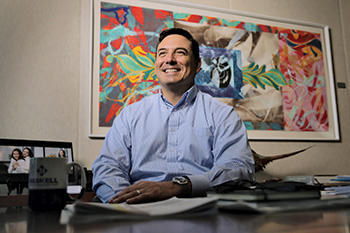 Another of O’Leary’s goals was to “Optimize intellectual capital, technology and innovation.” Since he became CEO, the contractor has taken tangible steps in that direction. Haskell was one of four founding members—along with Black & Veatch, DPR Construction and McCarthy Building Cos.—of the NEXT Coalition, announced in May, that is seeking “to identify and advance processes and technologies most likely to bolster construction safety in response to the ‘next normal’ ushered in by COVID-19.” In a statement announcing NEXT, O’Leary says the aim of the group is “to accelerate impactful change within our industry and beyond.”

But Haskell was already in the technology arena. In June 2018, the contractor created a separate venture, Dysruptek, to support the company’s technology and innovation goal. The group focuses on finding, developing and, critically, investing in new technology and delivery methods, says Cutler Knupp, who leads Dysruptek with the title of director of strategy and investment.To that end, Dysruptek invested in  industry capital investment firm Brick & Mortar Ventures as a strategic limited partner. In turn, Brick & Mortar provides Dysruptek with access to emerging technology companies so it can pilot those technologies on Haskell projects.

Dysruptek scouts for tools and delivery methods that could prove impactful anywhere from two to 10 years in the future, says Knupp, who has a background in finance and corporate strategy.

Pushing the bounds of technology produced a positive result on the construction of a new Miami cruise terminal for Norwegian Cruise Lines, working in a joint venture with Miami-based contractor NV2A Group. The terminal’s curvilinear design, by Miami architect Bermello Ajamil & Partners, was the result of the client’s requirement for a signature facility, says Alicia Cuervo, vice president with NCL, the project owner.

Cuervo, who has more than 20 years experience overseeing construction projects, offered singular praise for the contractor team’s delivery of a digital model that so thoroughly rendered every detail of the project that, to her, in effect: “The model is the as-built.”

The cruise company, which at ENR press time had not yet returned to sailing after the COVID-19 crisis hit, has hired the contractor for a future project, says Cuervo. Amid today’s uncertainty, that’s a good sign that Haskell’s on the right track.