Firms Find the Technology to Keep Working Through a Pandemic

When industry firms first complied with stay-at-home orders and shutdowns earlier this year, many assumed it would be a few weeks of logging in remotely and performing triage on the most critical projects. But as the COVID-19 pandemic drags on, with jobsites slowly reopening under the specter of future shutdowns, many construction industry firms and software providers are wondering if these temporary measures will result in permanent technological adaptations.

Technology is also being used to better understand the scale of the construction slowdown. Procore analyzed its project management platform’s user data on changes in employment and worker-hours in different regions and correlated it with similar information from the Associated General Contractors of America.

Tracking thousands of real-time transactions by its users, Procore determined that roughly 13% of the U.S. construction workforce lost jobs in March and April, a reduction that aligns with the 975,000 lost  construction jobs that AGC derived from U.S. Census Bureau data.

AGC knew the total number of jobs lost, but it wasn’t able to drill down further into the data—to determine, for example, which jobs were lost when and what states experienced losses due to stay-at-home orders—without Procore’s records. “It is always good to have multiple sources of data to validate our findings,” says Ken Simonson, AGC chief economist.

Procore was able to estimate that nationwide construction employment hit a pandemic-related low of 11.5 million the week of April 5. But construction jobs stabilized soon after, climbing above 12 million jobs since the last stay-at-home orders went into effect during the last week of April. Employment has risen further since.

Procore’s state-by-state data largely tracked with AGC’s own data. Another correlation with AGC’s census data is that small construction companies, defined as those with less than $20 million in annual revenue, saw the biggest losses of worker-hours, losing between 10% and 20% of their hours between the weeks of March 15 and May 4. 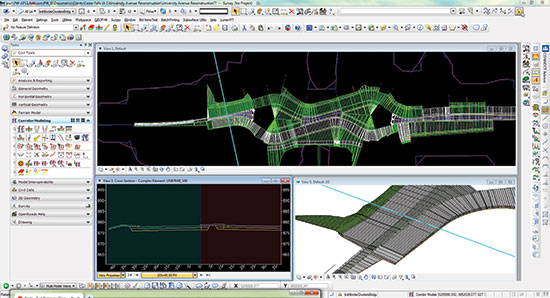 Foth has been able to keep up the pace on its engineering and design work for transportation agencies thanks to cloud-based software. Image Courtesy Foth

While many firms are hurting, those able to keep working are moving at a steady clip. “Our infrastructure team hasn’t skipped a beat during this COVID-19 outbreak,” says Blaine Buenger, senior technology manager at Green Bay, Wis.-based engineering firm Foth.

According to Buenger, work from state DOTs and other public agencies has not slacked off. The company is fully utilizing the cloud-based features of its Bentley ProjectWise 365 setup to keep designs moving along. “There are people eager to get back in the office, but if we get another order to work from home, we have a system already in place.”

While Foth is able to keep working, Buenger says there have been some new priorities from public owners that make up much of Foth’s client base. “Our infrastructure clients in DOTs, aviation and in counties have pulled back on construction, and some are routing those dollars into design.” Many of Foth’s clients anticipate federal infrastructure spending and want to have plans ready, he says.

The inability to send personnel to sites and conduct in-person meetings is a problem, but Buenger says they are finding creative work-arounds. “We had one client present an issue to us that would have required a site visit,” he recalls.

Social distancing rules meant the whole team couldn’t go to the site. “We had our [drone] pilot go himself, launch a drone and live-stream the flight via Microsoft Teams to stakeholders, which  allowed them to give directions to the pilot to look at areas they were interested in,” he says. 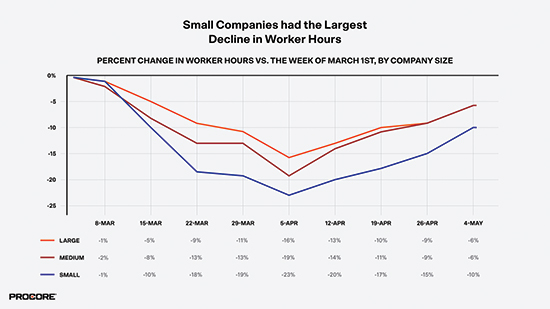 Information captured by Procore in its widely used project management software shows the impact of the pandemic on small firms. Graph Courtesy of Procore


'Digitize Is the New Sanitize'

“One of the things we’re seeing with public agencies is that digitize is the new sanitize,” says Balaji Sreenivasan, CEO of Aurigo, which makes cloud-based, capital project management software used by some of the largest public agencies in the U.S. and Canada. “We’ve seen a 25% increase in adoption since the COVID-19 pandemic began … public sector agencies are seeing this shift to the cloud as the new normal going forward.”

Onboarding has not been an issue says Sreenivasan, who notes that the City of Seattle completed a long-planned migration to Aurigo Masterworks earlier this month without incident. Aurigo also recently added integration for the Zoom communication platform into its software suite, a request from many users suddenly working remotely.

Even some of the world’s biggest projects have been able to advance despite the COVID-19 pandemic. Sweco Denmark A/S is lead design firm for the dredging and reclaiming work on the $7.5-billion, 18-km Femern tunnel that will connect Denmark and Germany. When complete, it will be the world’s longest sunken tube tunnel.

Recent approvals from the Danish government have allowed the project to advance, and Sweco says it can keep working despite the pandemic.

“With the high degree of digitalization, our capacity to deliver has remained relatively unchanged,” says Åsa Bergman, president and CEO of the firm's Stockhoim-based parent. More than 80% of its 17,000 staff worked from home at peak, she adds.

The company’s decentralized business model, which includes having small teams located close to clients, is key, she says. “We have quickly scaled up our IT infrastructure and been able to maintain basically full capacity in our project deliveries.”

Employees appear to be faring well under the changed working environment, based on a recent internal survey. “Our employees still are highly motivated, despite everything that is going on and all the challenges that we are facing due to COVID-19,” says Bergman. “But of course, you lose something when you cannot meet in person.”

Sweco has also turned its efforts to combating the pandemic more directly. The firm was hired last year by the European Centre for Disease Prevention and Control to visualize, structure and automate EU-collected data on reported disease transmission, and that assignment now has expanded to cover the spread of COVID-19 in 27 EU member nations. The data sets and visualizations are available on the ECDC website, and are used by analysts with other bodies such as the World Health Organization.

Bergman says the “strong underlying demand” driven by digitalization, sustainability and urbanization “were strong trends already before COVID-19 but it may very well be that some areas within these segments will be accelerated.”

Industry Finds New Innovations to Stay Ahead of COVID-19