This website requires certain cookies to work and uses other cookies to help you have the best experience. By visiting this website, certain cookies have already been set, which you may delete and block. By closing this message or continuing to use our site, you agree to the use of cookies. Visit our updated privacy and cookie policy to learn more.
Home » Nonfatal Construction Injuries Edge Up but Injury Rate Declines
WorkforceGovernmentSafety HealthContractor Business Strategy
Construction Safety

The latest annual BLS report on workplace injuries and illnesses, released on Nov. 7, shows that construction nonfatal injuries totaled 199,100 in 2018, an increase of less than 1% from 198,100 the year before. The upturn, though small, follows two straight years of reductions in the number of construction injuries. [View 2018 story with several years' data here.] 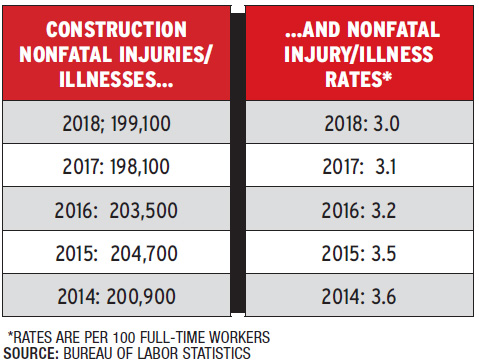 Cain noted via email that the days away from work incidents “tend to reflect more-serious injuries.” She added, “This drop is good news.”

In the nonresidential construction segments that the Associated Builders and Contractors monitors, the injury/illness rate has dipped from about 5.0 about a decade ago to 2.9 in 2018, says Greg Sizemore, ABC vice president for health, safety, environment and workforce development.

Sizemore said in an interview, "When I see data like that, it's very encouraging."  He adds, "For us, it just speaks volumes about that we continue to get safer and safer."

Sizemore sees the BLS figures as a "lagging indicator." He adds, "We've got to do more...to promote the leading indicators."

He's referring to such steps as daily "toolbox" safety talks on jobsites, for example, at the start of the workday or at lunch. ABC's most recent annual safety performance report, released in May, showed that toolbox sessions were the most effective such indicator, reducing Total Recordable Incident Rates by 85% compared with the use of monthly toolbox meetings.

The BLS report also showed that construction's nonfatal rate still was higher than the rate for all private employers, which held at 2.0 per 100 workers, the same as in 2017.

The data come from employers’ reports to the Dept. of Labor.

Story corrected on 11/08/2019 to say that the report covers injuries and illnesses. Story updated on 11/11/2019 to include comments from Associated Builders and Contractors.