One day after a new federal report sharply criticized the work of FIGG Bridge Engineers on the incomplete pedestrian bridge that collapsed at Florida International University last year, the lead technical designer of the structure—one of the country’s most accomplished bridge engineers—found himself on the witness stand in Miami-Dade County court. He explained under oath, in a pretrial hearing of the many lawsuits targeting the project team, that his telephone and its messages had been damaged and become unusable as evidence.

Denney Pate, who stamped the plans for the bridge, told a judge June 12 that his wife accidentally put his pants with the phone in the pocket into a washing machine, inflicting damage that destroyed any call records or images.

The phone is sought along with other electronic devices and documents in a trial of claims that consolidates 19 lawsuits against Tallahassee-based FIGG and other project team members, including FIU. Among the plaintiffs are families of five motorists and a worker who were killed, plus others who suffered injuries.

Phones and electronic messages may play a significant trial role. Pate had left a voice message with a state official on March 13, two days before the collapse occurred. The message assured the official that the unfinished bridge was safe despite significant cracks. Released by the state last year, the recording has been cited in lawsuits.

Pate has not commented since the tragedy and had not been seen in court prior to his recent testimony. After Pate was sworn in, a lawyer for another defendant asked him if he had taken photos of the cracks with his phone, since it was his first visit to assess them. “No, not to my knowledge,” he replied. 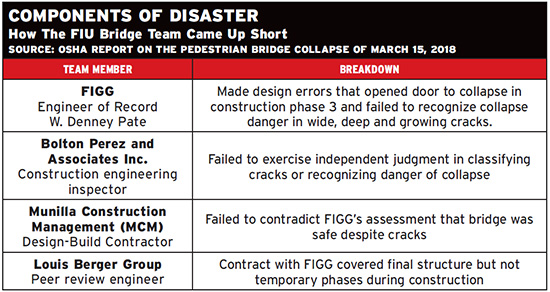 Shortly after, according to a videotape of the court session, Judge Jennifer D. Bailey expressed frustration with what she had heard. “I can’t tell whether any of this is remotely accurate and what may be out there that FIGG hasn’t told us about,” she said. Bailey had issued an order June 10 requiring witnesses to appear at a pretrial hearing. She wrote in the order that efforts to reach mediated settlements of the lawsuits must remain confidential but the lawsuits should move forward.

Bailey also wrote that she needed to know why FIGG had not yet provided phone and text messages requested for trial a year ago. She was unsatisfied with explanations FIGG had given so far about “what, if anything, may be lost or missing” from the document production phase that precedes civil lawsuit trials.

In a report on the disaster released in June, the Occupational Safety and Health Administration’s Directorate of Construction spreads varying degrees of blame for the collapse on members of the project team. A Florida Dept. of Transportation engineer, although not a structural engineer, missed opportunities to take action when he learned of the developing crack problems after the structure was in place above traffic but not yet finished or in use.

The structure failed before an additional part of the bridge, called the back span, and another pylon would have reduced the load on a critical connection of the unusual, single concrete truss design.

Consistent with the company’s branding of its “bridges as art,” FIGG conceived of the design as an elegant link, a pleasant public space joining the campus and community. The truss was cast off-site, transported to its place at SW 8th Street, and swung into position and seated on its piers using the Accelerated Bridge Construction method. Some post-tensioning was required during the movement phase.

OSHA found key errors in the design that opened the door to failure prior to completion. The report alleges that FIGG underdesigned a key diagonal member of the truss’s web, 11, and its connection to other structural components. OSHA criticized FIGG’s use of a nonredundant design and claimed the company failed to assess the risk from widening cracks just prior to collapse.

FIGG “failed to recognize that the bridge was in danger of collapsing when it inspected it hours before the collapse,” wrote OSHA Office of Engineering Director Mohammad Ayub, the author of the report. On the morning of the collapse, the team convened a meeting to discuss the cracks. Despite knowledge that the cracks were growing in size, and were wide and deep, the [engineer of record] “stated more than once that the cracks did not present any safety concerns.”

“The [engineer of record] should have immediately instructed that the bridge be shored at appropriate locations and SW 8th Street be closed,” wrote Ayub.

Instead, two days before the collapse,  FIGG recommended placement of a shim under the bridge diaphragm and retensioning of post-tensioning bars in diagonal 11. During the retensioning, the concrete blew out at the junction of diagonal 11 and 12, and the structure thereafter failed progressively. An employee of VSL, MCM’s post-tensioning subcontractor, Navarro Brown, suffered fatal injuries as hundreds of tons of concrete and steel fell onto the road.

In a statement, FIGG disputed OSHA’s findings, calling the report “factually inaccurate and incomplete” with “errors and flawed analyses.”

FIGG hinted that construction-related activities, rather than design, could be chiefly to blame. According to the statement, FIGG claimed the report “does not include an evaluation of many important factors pertinent to the construction process leading up to the accident. Additionally, it has not been reviewed by any other entities involved in the accident investigation.”

While a separate National Transportation Safety Board investigation continues, FIGG stated that “we are not able to elaborate further, but at the appropriate time the facts and the truth will be released to the public.”

During the days leading up to the tragedy, different team members expressed different levels of concern, project records show. In its report, OSHA blamed Bolton Perez Associates, the project’s construction and engineering inspection contractor, for failing to exercise independent judgment in classifying cracks or recognizing danger of collapse. Munilla Construction Management (MCM), the design-build contractor that had teamed with FIGG and which earlier this year filed for bankruptcy protection, failed to contradict FIGG’s assessment that the bridge was safe despite cracks. MCM “deferred to the decision of the [engineer of record] and failed to exercise its own independent professional judgment, as a constructor of the bridge, to close the traffic on SW 8th Street until the cause of the cracks were conclusively determined” and peer-reviewed, the report states. OSHA called the contractor’s failure to take those steps “unreasonable.” MCM did not respond to ENR’s request for comment.

The report doesn’t solve all mysteries about what occurred.

While OSHA investigators seemed most puzzled by what they saw as FIGG’s inaction and complacency about the chance of collapse, OSHA was perplexed about the role played by Louis Berger Group, listed as the project’s engineering peer review contractor. Berger did not analyze temporary conditions of the structure in the different phases of construction, OSHA wrote. “The forces in the truss members … would be significantly different when the truss is continuous compared to the truss as simply supported on the south pier and north pylon.”

According to the report, Berger explained to OSHA investigators that FIGG contracted the firm only to do the final check and not the design check at intermediate stages. “If Louis Berger had checked the design at Stage 3, it could have discovered structural deficiencies in the design, and this incident could have been prevented,” the OSHA report speculated.

Note: This story was updated September 20, 2019 to reflect a change made to its report by OSHA in July. The change specifically removes an inaccurate phrase in the initial report in which OSHA claimed that the Louis Berger company did not respond to repeated requests to provide OSHA investigators Berger’s peer review computations and emails with FIGG. The final paragraph of the story was added September 20 and now more accurately represents OSHA's final report.