Hundreds of hard-hatted workers cut and slot rebar ... scores more workers smooth fresh concrete into molds while a dozen-man team steadily ties the rebar into a 100-ft-long cage and welders attach fittings to crossties. All this activity is taking place in Papalanto, a rural stretch of southwest Nigeria.

This is the heart of the Lagos-Ibadan railway project. The 156-kilometer segment will be the second link in a new national standard-gauge double-track rail system that will carry freight and passenger service.

Papalanto, which is centrally located, is the main project base, with about 1,000 workers engaged in casting beams and sleepers, machine-welding long rail segments and assembling panels of sleepers fixed to rails. Sleeper-casting is also performed at a plant in the Ebute-Metta neighborhood of Lagos, the project’s southern terminus, and additional beam casting is carried out at a plant in Omi Adio, near Ibadan, the northern terminus.

Surveying began in March 2017, and construction commenced simultaneously that May on all four sections of the route. The government is responsible for land acquisition, which is ongoing. 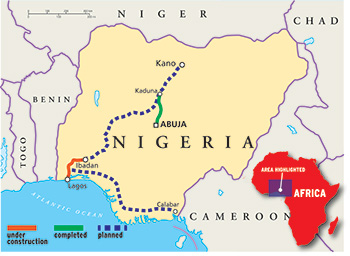 Weather is a significant factor influencing the project’s pace. “During the rainy season [which extends from May through September] our work on the structures is almost stopped,” says Tang Xiaodong, deputy project manager, China Civil Engineering Construction Corp., the design-builder. “We do less earthmoving, and concentrate on laying ballast, track-laying and rebar-binding.”

The project’s biggest challenge has been utility relocation. None of the utilities—water, oil and natural gas companies—has maps showing locations of the pipes crossing the right of way. “Because they don’t have records, we have to do the survey ourselves,” says Tang. The effort proved so difficult that a ground penetrating radar system was ultimately purchased from a supplier in Italy, which overcame the problem.

Procurement has gone smoothly. “The main materials we are buying are cement, rebar and diesel,” says Dai Shunfa, deputy project manager. “These materials are easy to get in the Nigerian market. Because of quality control, we only collaborate with the international suppliers such as Total, Dangote, and Lafarge. For smaller materials, we will choose reputable local companies which have had a long time cooperation with CCECC.”

The rails were produced in China, brought to Nigeria by ship, and transported between Lagos Port and Papalanto by a fleet of 22 trucks making over 1,000 trips. The 150-km route over the notoriously potholed and overcrowded roads resulted in round trips of three or four days—stark evidence of the need for the railway.

The project is on schedule, with 94% of earthwork completed, including 13 million cu meters of excavation and 7.2 million cu m of fill. With average annual rainfall of 59 in., more than half of which falls between May and July, large culverts are critical; 189 of 203 are in place. Distinctive herringbone-patterned drainage channels blanket the embankment slopes. The line includes 21 bridges, totaling 6.1 km, supported by 197 piers and 1,641 piles.

“Track-laying has been completed on 90 km of the 156-km route, with the rest expected to be completed by November,” says Zhou Dongping, business development manager. Construction of the ten stations is underway. Rail service will offer reliability that Nigerian roadways cannot. “Roads in Nigeria are not conceived with the same specifications as Europe,” says Visinoni. “There’s too much traffic; they cannot be expected to last.”

The project workforce includes 8,100 Nigerians and 700 Chinese. Among them are 180 Nigerian engineers and 100 Chinese engineers. All of the Chinese workers hold administrative or managerial positions, but Nigerians fill administrative and supervisory roles as well. CCECC’s practice of hiring and training an almost totally Nigerian workforce differs from some other Chinese contractors working in Africa, which employ very little local labor.

Given CCECC’s long-established presence in Nigeria, workers who show promise are able to move from field positions to administrative roles.

Musa Abdullahi joined the company in the 1990s, fresh out of secondary school. “I wanted to be a laborer,” he says. “The project manager at that time told me, ‘No. I see you have potential. Come and operate machines.’ I operated payloaders and also rail carts [motorized vehicles for driving crews down the track].” For the past dozen years, he has handled public relations and visa matters.

Yinka Bolashodun, 32, is a civil engineer who joined CCECC in 2017 as a surveyor and has already been promoted. “I am now a supervisor of beam and sleeper sections at the Papalanto plant. I have told friends about the company, and some have been hired—as laborers, surveyors and engineers.”

Beyond the company’s role as a major employer, it has tried to be a good neighbor. “We built three schools for Ogun State, dug wells for the local community and repaired a local road,” says Tang.

The majority of the Lagos-Ibadan project’s $1.58-billion cost is funded by a $1.275-billion loan from the Export-Import Bank of China, with the remaining $300 million supplied by the Nigerian government. The line is expected to begin operating in May 2020.

Nigeria’s existing 3,500-km-long narrow-gauge rail network was built in the early 1900s and is showing its age. “We let the system rot away,” says Mohammed T. Babakobi, director of rail transport services for the Nigerian Ministry of Transportation. “We have so many resources rotting away because we have no transport. We need to take the freight away from the roads. The narrow-gauge system moves only 2% of the freight. If we build the new standard-gauge system, it will move 40%.”

CCECC completed a 187-km-long branch line from Abuja, the capital, to Kaduna, in 2016. For the next stage, Nigeria plans to extend the standard-gauge line north from Lagos, a megacity of 20 million people, to the commercial hub, Kano—a distance of 1,316 km.