PG&E in particular is under scrutiny for its role in 2017 and 2018 fires, with potential liability leading to the publicly-traded firm’s Jan. 29 bankruptcy filing.

Its mitigation plan could cost between $1.7 billion and $2.3 billion to implement, said the utility.

It also noted on Feb. 11 that it will reshape its board to include 11 independent members. Only five of the now 10-member board will stand for reelection at a May 21 shareholder meeting.

Utilities have been required to develop wildfire mitigation plans since 2017, but a state law, Senate Bill 901, adopted last September required more nuanced and detailed information in the plans. The regulators, who will review plans and modify them if needed before approval in May, also can pursue enforcement actions for noncompliance under the law. 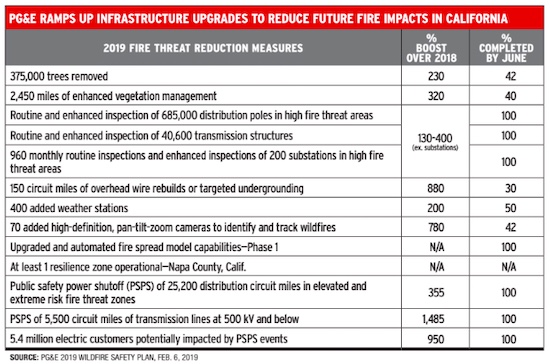 He proposed last month to have it inspect its entire electric grid by June 21—which the firm and industry participants said would cost up to $150 billion and is infeasible and potentially dangerous.

PG&E also filed its mitigation plan to Alsup, who has reserved further action until results of a public comment period that ends on Feb. 20. But he was critical of some aspects of the plan.

“PG&E agrees with the court that the state of California is facing a critical public safety emergency,” the company said in its filing to Alsup. It added that with fire risk growing in its service area, “it is imperative for public safety that all potential sources of wildfire ignition are addressed.” The firm has 100,000 miles of overhead distribution and transmission lines.

Among upgrades the plan says PG&E is making (see chart above) to mitigate electrically caused wildfires is reducing vegetation contact with power lines. Its enhanced vegetation management program includes clearing all overhanging limbs and those within 4 ft of distribution lines in high fire-threat areas.

These accounted for more than 75% of vegetation-related fire ignitions in high risk areas since 2013, the utility says.

PG&E is searching for additional trained tree crews and is considering new partnerships with unions and contractors to train additional workers to deploy as soon as possible.

Tom Dalzell, business manager for electrical workers’ union Local 1245 in Vacaville, which represents about 12,000 PG&E workers, tells ENR that the plan “will be hard to accomplish but it’s a good stretch goal.” He adds that “the question is how do we get more people who are well trained and safe,” noting 100 fatalities in 2018 involving workers trimming trees around power lines. “We talk to PG&E every day” about safety issues.

The utility plans by May 31 to finish enhanced inspections of assets in high-threat areas before the summer heat-triggered fire season.

But in a controversial move, PG&E will expand the area to de-energize lines in high-wind fire risk conditions that also is expected to include some low-risk areas—which could affect up to 5 million customers, from 570,000 now.

In comments, attorneys for fire and explosion victims said PG&E should evaluate and restructure its process to assess and manage wildfire risk, certify individuals to identify hazards to electrical conductors and set budgets and timelines to bury or insulate lines in higher danger areas.

They also recommended a wildfire safety and risk management committee with the authority to audit and evaluate performance against targeted goals.