When it voted Dec. 14 to permit South Carolina Electric & Gas to merge with Dominion Energy, the South Carolina Public Service Commission sought to tie up the loose ends of the now abandoned V.C. Summer nuclear power plant expansion in Jenkinsville, S.C. The commissioners at the same time ruled that SCE&G had not deceived regulators in 2015 about the true costs to finish the project—a charge made by the state utilities watchdog, the Office of Regulatory Staff. SCE&G had made a concession to the regulatory staff office a few days earlier when it reached a settlement with the state in which the utility had to return to ratepayers $2 billion wasted on the construction project.

The dramatic high point of the commission’s public sessions came from Carlette L. Walker, SCE&G’s former vice president of nuclear finance administration. An accountant who had several times testified before the commission on behalf of her employer, she returned to the state capital in Columbia—but this time as the star witness against the utility in the commission’s weeks-long hearing over the deception complaint. It was not a warm reunion or a happy story.

Walker revealed the dissent outside the executive suite around the contracting consortium's pledges to complete the project.

Beyond the ratepayers lawsuit, the hearing testimony opened a new window onto one of the more spectacularly wasteful construction projects in recent years and the corporate groupthink or self-interest that may have prolonged it. For the first time, Walker revealed the dissent outside the executive suite around the contracting consortium’s pledges to complete the project. She swore under oath that she signed off on testimony about the estimated costs that was not true. She portrayed her former mentors and colleagues of 30 years as ethically challenged managers who sought to justify future bonuses while ratepayers coughed up higher payments for years of mismanaged construction while, from 2013 to 2017, the overall cost to finish the Summer plant rose to over $13 billion from $9.8 billion.

Walker laced her deposition prior to testifying with bitterness and sarcasm, especially for Kevin Marsh, SCE&G’s  CEO—who, along with COO Stephen Byrne—was ousted by the company board in late 2017. She described Marsh as a “worthless liar, because he was only seeking a way to silence me.” Walker said Marsh led four other senior executives in a conspiracy to force her out.

What Walker claimed may be of interest to state and federal investigators and plaintiffs in civil lawsuits accusing SCE&G directors of falling down on the job. The issues come down to what the utility executives knew of the project’s true status, whether they reported accurately to the commission and stockholders and whether the utility was too generous with contractors at the expense of ratepayers and investors.

Ousted CEO Kevin Marsh claimed in deposition that SCE&G released to state regulators the best information available at the time.

Breaking with plans, Shaw shipped critical modules to South Carolina only partially built. SCE&G made numerous complaints to Westinghouse about design assemblies that were “not buildable” and numerous pleas to the contracting consortium about cost and schedule that were met with empty promises to do better. By 2015, Westinghouse had allowed Chicago Bridge & Iron to buy out Shaw Group’s contracts, but the contracting consortium remained unreliable. SCE&G and its project co-owner, utility Santee Cooper, sought to switch the mostly cost-plus contract to a completely fixed-price one. Westinghouse planned to buy out contracts held by CB&I, which was bleeding cash, and installed Fluor Corp., but it took no risk.

Under the new arrangement, SCE&G would pay Westinghouse $100 million to $130 million a month from January to May 2016, with adjustments to be made later in a “true-up.” Kenneth Browne, an SCE&G project nuclear engineer, testified that “to the best of my knowledge” the true-up based on the actual, lower costs expended by the contractor never was done. As the plan for the fixed-price contract approached and SCE&G applied for another rate increase to pay for it, Walker had a small team spend several weeks researching Westinghouse’s latest cost-to-complete estimates. Based on what she learned, she didn’t believe the estimated fixed-price cost to complete of $698 million; she believed $1.2 billion was nearer the truth.

The performance factor supporting the cost to complete was another puzzle to Walker, she said. That figure—based on how much time contractors took to complete a task versus the original time estimate—was used to determine progress and predict future patterns. A rate of 1.0 would reflect a perfect performance against the estimate, while a higher number would reflect negative performance. 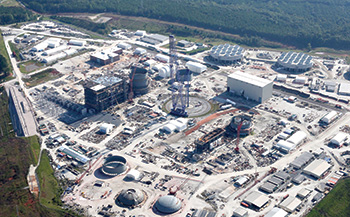 The V.C. Summer expansion project in Jenkinsville, S.C., prior to abandonment last year.

In 2015, the consortium promised to get its performance factor to 1.15, but Walker’s study team determined that this was not achievable because the historical performance factor had been 1.4. In that case, she believed “you’ve got a major problem,” as she said in her deposition. Browne said the study team received no communication about it from senior management and the contractors’ project performance worsened in later months.

As supervisors barraged her with criticism for her doubts in the middle to late months of 2015, her husband suddenly suffered a serious kidney disorder, forcing her to stay home to attend to his care. While she was out, other SCE&G staff drafted Walker’s written testimony to be delivered in the fall endorsing the $698-million completion estimate. Anxious to retain the executives’ support, her high-paying job and health insurance, Walker said she signed off on what essentially was a lie. When she returned to her regular duties on the project, the pressure of her doubts about the project’s costs troubled her so much that Walker’s weight dropped by 70 lb, she testified. At some point in late 2015 or early 2016, Walker said in her deposition, she told current CEO Jimmy Addison, then chief financial officer and Walker’s supervisor, “that I was not going to lie for the company.” As a certified public accountant, she said she felt an obligation to the public. Six weeks later in 2016, she said, the utility company put her on a special medical leave.

Walker didn’t remain completely passive, however. In a phone message left in early 2016 to Marion Cherry of Santee Cooper, Walker declared that her lawyer said the company executives broke numerous laws and that Santee Cooper should drop out. “Don’t sign any change orders,” she advised. Santee Cooper’s withdrawal, together with Westinghouse’s March 2017 bankruptcy, finally forced SCE&G to stop work.

Addison told the commissioners that he never coerced Walker to sign off on false testimony. Former COO Byrne, who also testified in person, and Marsh, who provided a deposition, claimed the company made reasonable estimates in a difficult situation where prime contractor Westinghouse, Shaw Group and CB&I never shaped up. Even so, Byrne testified, but for the Westinghouse bankruptcy, “We would still be building.”

At the recent hearings, SCE&G’s Atlanta-based outside attorney, David Balser, sought to undermine Walker’s credibility. He displayed emails sent by Walker to suggest that she did participate in the preparation of her submitted testimony and the company’s $698-million estimate. In the emails, Walker apologizes to Addison and others for her over-the-top, self-righteous behaviors. In sometimes testy responses to Balser, Walker called the offered apologies “creative writing” intended to protect her job.

“I felt very threatened,” she had said in her deposition about the prospect of being fired. Walker eventually retained a lawyer to negotiate a severance package. Her testimony showed not only how the mismanaged project undermined public trust but also how it harmed long-term relationships, careers and her health—and cut short the U.S. nuclear renaissance.

This story was updated Dec. 19 to reflect Kenneth Browne's correct first name and that Carlette Walker's 2015 written testimony was prepared by others while she was out caring for her husband. It was updated Dec. 20 again to show that Walker testified in her deposition that she wasn't put on special medical leave until 2016.