How Jacobs Pried $109M For Blast Costs From Conagra Brands

The record of the fateful hours before the horrific June 2009 explosion at Conagra Brand’s now-defunct Slim Jim plant in North Carolina reveals an excruciating, slow-motion series of errors.

Brought in to commission the Garner plant’s newly installed, natural-gas powered water heater, an outside contractor tried 32 times over 3½ hours to fire up the new system, to no avail. As the hours passed, the contractor repeatedly cracked a valve to purge air from a gas line in order to light the water heater. The smell of gas in the pump room grew so strong that plant employees and a town inspector became alarmed. A nervous Conagra supervisor suggested the contractor test his gas meter outside to ensure it was working. Not present that day because of an illness was an employee of Jacobs Engineering, a technical advisor to the heater work.

Conagra claimed that misconduct by Jacobs' outside attorneys in a civil lawsuit by the accident victims added to the cost of the settlements.

Shortly afterwards, the contractor returned to the pump room and lifted the cap on a 2-in. gas line, flooding the space with gas in an apparent attempt to purge the line of any remaining air. In less than a minute, the gas ignited, causing an explosion that collapsed a section of the plant roof. The blast killed the employee of the contractor, Energy Systems Analysts, and three Conagra workers, injuring dozens of others, some with burns.

The allegations of gross negligence that soon emerged thrust Conagra and Jacobs into legal crosshairs. What happened over the next decade can only be described as strange and costly. If anything, it shows how the long-lasting damage of a safety lapse can reverberate for years. With more than $100 million at stake, attorneys for Conagra tested indemnification clauses in a no-holds-barred, win-at-any cost court battle.

Federal safety officials who analyzed the accident called it an example of why never to purge gas from a pipe into an enclosed space. North Carolina’s Dept. of Labor placed all the blame on Conagra and found that Jacobs’ scope of work gave it no knowledge of the hazardous conditions. Conagra didn’t contest the findings.

In civil court things weren’t so simple. There were two key cases. Attorneys for some of the families of those killed and injured, seven plaintiffs in all, filed a negligence lawsuit against Jacobs that led to a 2012 trial in North Carolina state court. The second case involved a 2014 lawsuit by Jacobs against Conagra that went to trial in 2016 in Nebraska state court, where both companies were based (Conagra later relocated). Jacobs sought to enforce the indemnification in its contract with Conagra—partly by showing how it was only a technical advisor, not a prime contractor. It seemed like that alone might force Conagra to pick up the damages, as Conagra seemed the culpable party.

There was one huge blunder by Jacobs’ local lawyers at the 2012 negligence trial that may have colored its future dealings with Conagra. Donald Pottner, the Jacobs onsite project manager who was away the day of the explosion, took the witness stand for Jacobs. Following a stressful three hours of testimony where he admitted things not disclosed in his deposition, Pottner became ill, and the Jacobs lawyers took him to a hospital, where Pottner had a CAT scan and remained for three days. Pottner went home after being released, and the Jacobs attorneys reported to the court that their client was unable to continue, citing a possible aneurism and systolic blood pressure of nearly 220.

Judge Robert Hobgood, using subpoenaed hospital and exam records for Pottner, saw that Pottner showed no evidence of aneurysm or high blood pressure and that the hospital had discharged him with instructions to take aspirin for headaches. Hobgood wrote in an order that the Jacobs attorneys “had misrepresented the nature or severity of Pottner’s illness,” and “if the Court had known the accurate state” of Pottner’s health, it would not have let him leave. So Hobgood struck Jacobs’ defense and simply instructed the jury to focus solely on the issue of damages. The result was a $14.6-million jury award.

Attorneys have been known to interrupt or try to postpone depositions when their clients or witnesses are doing badly. But what happened in this case “was not the sort of thing you would typically see in the field of corporate litigation,” said Gina Vitiello, a shareholder of attorney Chamberlain Hrdlicka, which had no role in the case. Whatever Jacobs’ strategic intent, the move backfired badly. The court later granted Jacobs a new trial, with the engineering giant moving to settle the case for $20 million before it began. Jacobs, in turn, requested almost that much plus interest from Conagra.

The second major legal chapter, regarding the indemnification, took place before a jury in a Nebraska state court. Both Conagra and Jacobs appeared to have significant legal protection against just such a disaster through indemnification, which prevented either side from being unfairly left holding the bag for the other’s negligence. A standard I’ve-got-your-back-if-you’ve-got-mine agreement, Jacobs agreed to indemnify, or protect Conagra from costs and expenses, in case it faced litigation stemming from any injury, death or accident caused by Jacobs employees, its subcontractors or Conagra employees working under its supervision.

Conagra, in turn, agreed to indemnify Jacobs for any deaths, damages or injuries found to have been caused by Conagra or contractors and employees under its control.

Jacobs’ attorneys said it settled the 2012 suit and paid subsequent settlements to other plaintiffs, ultimately expecting to collect the funds from Conagra. Jacobs’ understanding all along was that Jacobs wasn’t in charge of the work because it was not the controlling employer, and that Pottner was not even on the scene on the day of the deadly blast. Nevertheless, Conagra refused to pay. So in 2014, Jacobs sued Conagra to enforce its indemnity agreement and get reimbursed for the roughly $109 million that the company’s insurers and Jacobs had paid to settle the lawsuits.

Conagra pushed back, attempting to absolve the company from liability with some envelope-pushing legal arguments. The food-processing behemoth claimed Jacobs wasn’t a “true party of interest” and as a result had no standing in the case.

Conagra’s lawyers argued that there was no evidence Jacobs paid for the settlements out of its own pocket, suggesting that the firm’s insurers forked over the money to the families of employees who were killed and maimed.

There were more skirmishes. Conagra’s legal team fought an intense battle to force Jacobs to turn over the records of payments to the victims and their families. Conagra argued that the amount it was being asked to pay was significantly higher because of the misconduct by the lawyer. Jacobs successfully fended off Conagra’s attempts to forage through the engineer’s payment records, though it did produce the insurance agreements, which showed it had both a deductible and an obligation to pay 10% of any award exceeding $7.5 million. 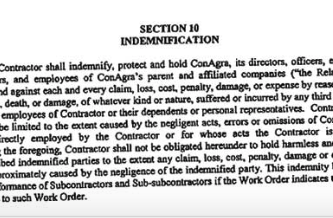 A section of the first clause of the indemnification. Source: Nebraska Court Documents.

The Nebraska Supreme Court judges rejected Conagra’s accusation that the Jacobs lawyer’s misconduct significantly affected the amount of the settlements. The judges cited the testimony of Jacobs’ expert witness, who they said demonstrated the reasonableness of the settlement and, presumably, others that followed. The expert had mentioned that Jacobs was a target defendant as an out-of-state “faceless” corporation with deep pockets. And, according to the appeals court judges, Jacobs’ expert witness described the horrific nature of the injuries for some of the first trial’s plaintiffs—including temporary blindness and paralysis and wounds requiring neck, spine and knee surgeries, some of which required the insertion of a metal plate—which justified the payouts.

While Conagra’s legal strategy may have raised eyebrows, the company legitimately had reasons to be peeved as well, legal experts say. The maker of Slim Jims, hot dogs, peanut butter and various other foods may have miscalculated the full implications of its indemnity agreement with Jacobs, legal analysts say.

As in other states, Nebraska law confines employee injury lawsuits to the state’s workers’ compensation system, the court noted. Conagra argued that since it did not specifically waive its workers’ compensation protections in the indemnity agreement, this protection was implied and still in place. In particular, Conagra may not have believed that by inking the indemnity deal, it was effectively waiving its immunity from lawsuits by employees and their families after workplace accidents and tragedies.

But under Nebraska law—where Conagra was based at the time—any effort to preserve workers’ compensation protections, such as in the case of an indemnification agreement like the one Conagra struck, must be spelled out.

“Our precedent, however, does not recognize the rule Conagra suggests,” noted the Nebraska Supreme Court. “We have taken the opposite approach in analyzing indemnification agreements, finding a waiver of workers’ compensation immunity where an indemnity provision fails to include language stating that an employer has not waived immunity.”

Conagra is likely not the only company that has run into trouble when it comes to the intersection of state workers’ compensation statutes and indemnification clauses, though. Complicating matters, different states interpret the traditional workers’ compensation immunity differently when it comes to indemnification clauses, with some taking the opposite tack, according to Stephen Hess, a construction law expert at Sherman & Howard in Denver. “In some states, they may interpret this as not waiving the owners’ workers’ comp immunity, while in other states like Nebraska this particular language is interpreted as waiving the immunity,” Hess said. “Every state is different.”

After the Nebraska verdict, Jacobs’ lead trial lawyer, Gil Keteltas, told the Omaha World-Herald his firm was grateful its client “was vindicated after seven years.” The company did not reply in time for this article about whether Donald Pottner was still an employee. Conagra officials could not be reached for comment, and efforts to locate contractor ESA were unsuccessful.

There is no single, overarching lesson to be drawn from the nearly decadelong battle between Jacobs and Conagra, legal analysts say. Certainly, Conagra’s failed attempt to assert protection under workers’ compensation laws from employee lawsuits is worth noting. For companies this can be a tricky area, especially in states like Nebraska, where indemnification agreements are interpreted by courts as effectively waiving the traditional workers’ compensation protections unless they are specifically spelled out.

Still, there wasn’t anything particularly exotic about the indemnification agreement between Jacobs and Conagra either, said Steve Nudelman, a partner at the law firm of Greenbaum, Rowe, Smith & Davis LLP in Woodbridge and Roseland, N.J. “There is nothing ambiguous about it,” he noted. “Reciprocal indemnification clauses of this nature are quite common.”

But maybe the biggest lesson is that when the stakes are high, even the best-written indemnification agreements will come under extreme stress.

Faced with the potential loss of hundreds of millions as victims and their families sue, companies will resort to every conceivable legal argument to shift responsibility and escape having to bear the full cost.

Said Nudelman: “Conagra threw in the kitchen sink and every possible legal argument they could think of.”