As congressional appropriators make more headway in producing spending measures for fiscal year 2019, construction industry officials see encouraging numbers so far for key infrastructure accounts, including highways and water programs. Some important accounts are benefiting from the 2019 installment of a $20-billion infrastructure infusion that congressional leaders in February agreed to provide over the 2018-19 period.

The latest evidence came on Aug. 1, when the Senate passed a package of four separate 2019 spending measures, each covering one or more federal agencies. Among the infrastructure programs contained in the measure are those at the Dept. of Transportation and Environmental Protection Agency.

Within DOT, the Senate bill provides a 2% boost for the highway obligation ceiling, as the 2015 Fixing America’s Surface Transportation (FAST) Act authorized from the Highway Trust Fund. The Senate also added $3.3 billion from the general fund for highway and bridges. 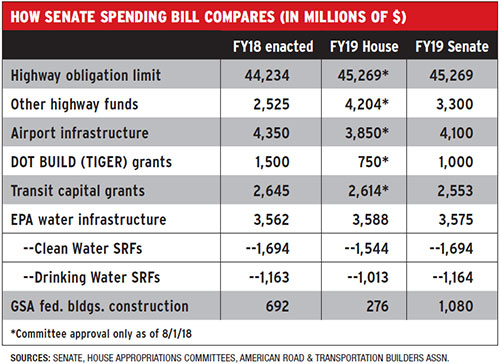 Brian Deery, senior director of the Associated General Contractors of America’s highway and transportation division, says that when the added DOT infrastructure “kicker” is combined with the FAST Act funds, “It’s a significant amount of money. And it’s in all the program categories.”

The Senate bill has $300-million hikes for EPA wastewater-treatment and drinking-water infrastructure revolving funds, keeping them about even with 2018. “That is realistically what we were hoping for,” says Kristina Surfus, National Association of Clean Water Agencies’ director of legislative affairs.

Still, it’s unclear whether the House and Senate can reconcile their spending bills’ differing figures and agree on final numbers before Oct. 1, when fiscal 2019 starts.

Looking further ahead, another $10-billion overall infrastructure bonus isn’t guaranteed for 2020. But industry officials point to lawmakers’ remarks referring to the added 2018 dollars as a “down payment” for infrastructure. Surfus says that, at least for water accounts, “We certainly hope that infusion of infrastructure program investment is going to become a new baseline.”

For DOT programs, Deery says, “Certainly we’re going to be pushing to keep the levels up in 2020.” But he adds, “When you talk about money, it’s never a sure deal.”

FHWA Releases First Batch of $7.3B in IIJA Resilience Funds