UK-based Turner & Townsend has pivoted over the past decade to fill that niche.

“Clients are under a lot more stress than they have been in the past,” says Vincent Clancy, chairman and CEO of the Leeds, England, firm that has grown from a mostly U.K.-centric construction manager into a valued capital program management strategist with 104 offices globally. “The amount of slack in the system has certainly reduced over the years to the point where cost and efficiency is right at the top of the agenda,” he says.

Clients have affordability, speed to market and the capacity to adapt to change and manage risk over the long term as primary concerns now—and construction firms need relevant skills on tap, Clancy says.

Yet many are still gearing up for the challenge. “Construction has been slow to change in many ways,” he says. “A lot of the investment required is long-term investment, and a lot of construction looks at the short term.”

The executive, who has been in his role since 2008 after joining T & T in 1989 and its executive board in 2002, wrote in the first's most recent annual report: "We believe that taking the long-term view and investing in our capability is the best antidote to uncertainty.”

“Large global companies are looking for that next level of sophistication from firms like ours. And they’re really pushing us on the technology and data analytics that we can bring.”

Turner & Townsend’s longer view has also lengthened its client roster—one that now includes names such as Google, Time Warner, Shell, Nissan, BP and Uber. The wider focus has helped Turner & Townsend grow its global revenue to $657 million last year from $40 million at the start of the century, mostly from fee-only construction management and program management work. That includes close to $100 million in U.S.-based revenue.

The results for 2016-17, its latest reporting year, show a 20% jump in both overall revenue and operating profit over the previous one. Global staff at the company, which started out in 1946 as a quantity surveying partnership, now numbers close to 4,800 (see graphic, below).

“We’ve had tremendous growth over a relatively short period of time,” Clancy says. T & T results for its current reporting year, which ended April 30, won’t be released until July, but a spokeswoman predicts “our thirteenth year of consecutive growth,” with boosted revenue and profit in all regions.

While the home U.K. market now contributes about half of the total revenue, it still grew 18.3% heading into last year. Patricia Moore, a 19-year firm veteran who was named in March as U.K. managing director and executive board member, now leads a team of 2,000.

The home market hosts most of the firm’s natural-resource clients and “has a massive influence in the global company,” she said in an industry interview last month. T & T operates “as one global business … and it’s a massive differentiator for us in the market,” said Moore, its highest ranking woman, who credited the “meritocracy of the organization.”

T & T has had a “laser focus” on the U.S., says John Robbins, its New York City-based managing director. with additional acquisitions likely. “The large global companies are looking for that next level of sophistication from firms like ours,” says the former Goldman Sachs real estate executive, who joined the firm in 2011. “And [they’re] really pushing us as well on the level of technology and data analytics that we can bring.”

T & T  knows what it can offer, and communicates that. “In terms of our service model, we’re very focused on the program management, project management and commercial management advisory side,” says Clancy. “We don’t engineer, we don’t design—we’re very clear about our role, and that’s resonated with clients.”

Adding consultative and advisory expertise emerged as a trend after the last recession, when some firms sought ways to stay busy, says Ashley Richards, a managing partner specializing in construction at Texas executive search firm Kaye/Bassman International. “They became more tech savvy and added consulting arms, and these are all different profit centers now,” she says, noting the diversification benefits “if things slow down again.”

Clients now expect construction sector firms to have pre-project advising expertise—work they once farmed out to others, Richards says.

“Taking the long-term view and investing in our capability is the best antidote to uncertainty.”

Those sectors are corporate, residential, institutional and government real estate; major infrastructure, including transportation, aviation, ports and rail; and natural resources in oil and gas as well as renewable energy.

One of its first big U.S. clients was Nissan, which brought in T & T to help manage the growth of its dealership network—resulting in a 21-year relationship now in all 50 states, Robbins says.

Today, the firm’s high-profile U.S. jobs run the gamut. It is program and cost manager for Time Warner’s corporate move to 30 Hudson Yards in Manhattan, a 2.6-million-sq-ft tower. There, the conglomerate will be an anchor tenant, using 1.5 million sq ft to consolidate 5,000 employees from units such as CNN and HBO by early 2019, with reports that the move will proceed despite the June 13-announced plan for the media giant's acquisition by AT&T.

Time Warner is set to invest an additional $1.4 billion in the development through 2019, it reported in a 2017 securities filing.

“Tracking, monitoring and reporting those costs is … important so that everyone understands where we are headed,” said Joel Brenner, Time Warner’s vice president of project management and global real estate, in an online interview.

Major T & T infrastructure projects include program management on an eight-year redevelopment program at Houston’s George Bush Intercontinental Airport. Currently in the design phase, the program may be “the most significant expansion project ever undertaken by the Houston airport system,” said city aviation director Mario C. Diaz in an earlier company announcement of its award to lead design, procurement, execution and control of the program.

The firm’s global work includes 35 airport projects across the world, Clancy says, such as expansion at Hong Kong International Airport, where the firm handles planning, procurement, risk and project-control consulting. It also runs construction, cost management and estimating for an upgrade of two major U.K. highways, including a planned $2.1-billion twin-bore tunnel within England’s Stonehenge site that is considered one of the country’s most complex and controversial projects. A public-sector manager told a U.K. industry publication in April that the project “strains against the government’s affordability limit.” 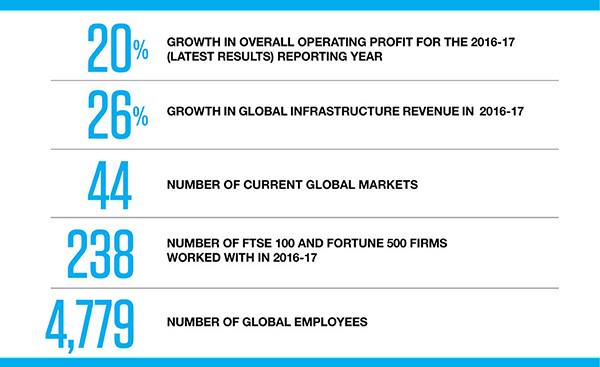 Across the firm’s specialties, clients have built up an appetite for bigger thinking around capital programs.

That touches upon many aspects of their organizations, including procurement and supply chain management, contracts, operating models, staffing, automation and budgeting, Clancy says. “We’re very happy to get right involved in that front end and do the strategic piece,” he points out.

Risk management and assurance is a key growth area, especially as clients take on more multibillion-dollar jobs with tougher stakeholder scrutiny, Robbins says. “We’re being called in to [provide] a level of due diligence, peer review, cost and risk assurance … to de-risk their projects,” he says.

Another busy area is in helping clients map a “whole-life cost analysis” at a program level to make decisions on acquisitions, sales, capacity and consolidation across real estate programs, Robbins notes. For big infrastructure projects, such processes can be critical backstops against budget bloat “probably because … not quite enough time was spent in the beginning, planning and assuring the [what it] ‘should cost’ [part] of a project,” he says.

That encompasses everything from streamlining communications—“How do we cut down on project-related emails?”—to advanced analytics, data management and reporting models, he says.

“We bring a wealth of data and analytics from different projects and programs we manage around the world, and a lot of clients love to tap into that big data, to judge where they stand against it or talk about lessons learned,” Robbins says.

T & T’s growth focus remains in areas where it is well-positioned to capitalize on trends, such as more oil and gas client investment in renewable energy and long-term maintenance projects, and planning smart city mega-developments that should survive the next real estate downturn.