The level of investment in construction technology in the past year and the number of players involved have been “transformational,” said José Luis Blanco Álvarez, a partner at the global management consulting firm McKinsey & Co. Blanco led off three days of industry professionals asking hard questions about the latest technology by presenting soon-to-be-published research on trends at the 2018 ENR FutureTech conference.

Comparing data collected from 1,000 firms a year ago with data from 2,400 firms today, McKinsey’s research shows the trend toward connected tools is supported by accelerating investment in construction technology, the pace of which doubled in the last five years relative to the pace of investment between 2008 and 2012.

“We’ve started to see different ‘constellations’ of solutions emerging around established use cases, such as modeling and BIM, VR and AR, as well as machine- and deep-learning to improve performance management,” Blanco said.

Blanco explained that when linkages representing common use cases between tools are charted, the new picture shows less concentration around the traditional silos for back-office management, onsite execution and collaboration, and more linkages to support new hot spots of design simulation, offsite fabrication, virtual learning, 3D printing, laser scanning, drone data acquisition, robotics and automation, analytics and machine- and deep-learning. The change between the use-case networks charted a year ago versus current linkages is striking, suggesting the demand for integration is growing.

The annual tech event in San Francisco June 4-6 brought together forward-thinking minds in construction. Rather than finding a single piece of technology to change everything, many speakers saw a range of technologies reaching maturity that could lead to sea change.

An industry ripe for new technology is driving new investment, according to Darren Bechtel, co-founder of venture capital firm Brick and Mortar Ventures. “Venture capital sees value, so they start placing bets, and all the mergers and acquisitions say ‘there’s value here, let’s buy in,’” he said. “Placing bets only works if the industry and users are ready, willing and able to adopt technology. It suggests we’re at a time where there’s a tectonic shift and the industry’s woken up.”

The promise of comprehensive project data was a major theme at the conference, where Mani Golparvar-Fard, COO and co-founder of Reconstruct Inc. and associate professor at the University of Illinois at Urbana-Champaign, talked about how computer vision can improve project schedules. Tapping into the visual data you already have on the jobsite—images, videos and point clouds—and using it with BIM and schedule data can improve the planning and coordination of schedules and streamline communication, he explained.

At a superintendent meeting with subs, for example, a project manager can engage in a conversation by location, communicating risk for potential delays. Now the subs can be alerted to expectations about their performance in the future and engaged in a conversation about how to improve the schedule. When you start using visual data, it brings “transparency to the processes on the jobsite, and because there is an element of AI and the prediction of risk, you can help eliminate potential problems,” Golparvar-Fard said.

Applying raw computing power and data analytics to the problems of construction was a running theme at FutureTech. But getting the buy-in required to do the sort of broad data analysis necessary may still be a ways off, argued Jit Kee Chin, chief data officer at Suffolk Construction. “Spotting these opportunities requires a different way of thinking, and I think the industry is starting to move in that direction, but I don’t know that we’re quite there,” she said. Companies operate on slim margins, and project teams unwilling to share data with potential future competitors are impeding efforts to bring data analytics to construction. “The [data] fragmentation across different GCs, or across the value chain as data is held by the owner, the architect, GC and subs—how do you actually bring that together and drive lower the cost of construction overall? And how can you have everybody share in the upside of that rather than all of the money go back to the owner?” 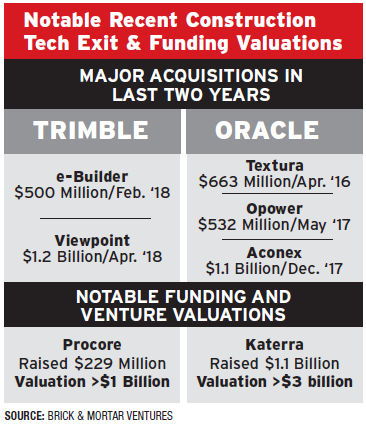 The emergence of artificial intelligence and machine-learning technologies targeted at construction drew a crowd, particularly efforts from startups Alice Technologies and Grit. Both systems digest multiple construction schedules and look for spaces where improvements can be made and time saved. A hushed crowd watched as a sequencing animation played for an Alice-driven bridge project, where elements were completed in a seemingly random order, but the pieces all fit to meet the project’s optimal schedule.

Some big benefits of new technology were seen in a presentation by Kiewit on the reconstruction of the damaged spillway at the Oroville Dam in 2017. Working on an extreme schedule, Kiewit used drone surveys to speed the project and provide weekly documentation of site conditions and construction progress. While they had to dodge other drones on site and numerous helicopter flyovers, Kiewit’s John Watson said cost was not an issue. “The data sold itself,” he said.

Adapting cutting-edge technologies to work for the construction industry can come with mixed results, but interest remains high. In a panel discussion on attempts to bring the distributed digital ledger of the blockchain to construction, Tom Wendling of Jacobs Engineering said his firm is taking a cautious approach to the technology, but sees potential for more transparency in engineering work. “It’s too early to be competitive; we’re still getting our bearings, so we have to cooperate. And blockchain itself is the sharing of information that allows for that.”