The collapse earlier this year of U.K. construction giant Carillion, which already has rocked Britain’s building sector, sent additional shock waves with the May 15 release of a new Parliament report that excoriates the firm’s “recklessness, hubris and greed,” and slams giant auditing firms and government regulators for missing—or ignoring—signs of financial mismanagement. 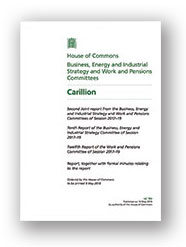 Carillion became caught in a vicious cycle of pursuing new projects to generate revenue to support operations, only to fall further into debt, says the report by two Parliamentary committees.

“Carillion’s business model was a relentless dash for cash, driven by acquisitions, rising debt, expansion … and exploitation of suppliers,” says the report, which singles out former finance chief Richard Adam as the “architect” of its aggressive accounting. Adam denies the charges in a statement to U.K. press.

The report also cites Richard Howson, Carillion’s former CEO and Phillip Green, its former chairman, and directors for their alleged roles in the company’s demise, and points to failings by Carillion auditors KPMG, Deloitte and Ernst & Young, which has prompted calls to break up large accounting firms.

KPMG, which earned $38 million over nearly 20 years as Carillion’s auditor, “did not once qualify its audit opinion, complacently signing off the directors’ increasingly fantastical figures,” the Parliamentary report notes.

Deloitte earned $13 million as internal auditor, and Ernst & Young took in $14.5 million “for six months of failed turnaround advice,” according to the report.

PricewaterhouseCoopers, which was brought in to handle the bankruptcy, was the sole member of accounting’s Big Four not singled out for criticism in the report.

“The auditors should have been screaming the place down and they weren’t,” said Julian Anderson, president of construction cost consultant Rider Levett Bucknall’s North American operations.

The Carillion events have spurred calls in the U.K. to break up large auditing firms.

Four projects – all public private partnerships – were to blame for most of the write down. Three were in the U.K. – two English hospitals and a major road project in Scotland. The fourth was a new development in Qatar.

Public private partnerships are capital intensive for the companies that win the bids on these projects and risky as well given they are on the hook for funding them, said Anderson.

“Public private partnerships … have significant risks for the entity undertaking them,” he noted. “Carillion didn’t understand the risk or couldn’t manage the risk.”

The parliamentary report also took aim at Carillion's practice of stretching out payments to subcontractors as long as possible, decrying the “harshness” of the system.

While Carillion signed onto a government-sponsored, 60-day prompt payment pledge, in practice the company made 120 days the standard for paying subs and suppliers. In addition, Carillion offered speedier payments to subs and others who agreed to take a reduced amount, the report found.

The company’s payment practices were part of a larger accounting/financing scheme called reverse factoring that recently drew fire from Moody’s.

Banks and other lenders paid out the discounted payments to subs and suppliers on behalf of Carillion, earning a profit by later collecting the full amount from the construction giant.

However, the amount of money Carillion owed to lenders under this arrangement, which ballooned to $670 million, was not clearly reported on its balance sheet, according to Moody’s.

"Carillion's approach to its reverse factoring arrangement had two key shortcomings: the scale of the liability to banks was not evident from the balance sheet, and a key source of the cash generated by the business was not clear from the cash flow statement," said Trevor Pijper, a Moody's vice president and senior credit officer.

UK Build, the contractors association of which Carillion was once a member, has blamed the firm's collapse on a “commercial model that is not fit for the purpose.”

In particular, the contractor’s association, which has formed a task force to look at potential reforms, cites a “combination of lowest price, inequitable transfer of contract risk, poor payment practices and inadequate governance.”

But the Confederation of British Industry blasted the report’s “knee-jerk sound bites” that it fears “will lock out innovation and investment.”