Nearly five years after the sale of The Shaw Group to CB&I, the contractor’s founder, Jim Bernhard, is in familiar territory.

“The space we’re in is a huge, mid-market industrial space,” he says. In November, Bernhard’s PE firm acquired three infrastructure management firms, combining them into a new entity led by Joe Boyer, former CEO of Atkins North America. These firms were added to its three other portfolio firms, which, together, now employ about 16,000 people, says the firm.

Bernhard says his PE firm is targeting well-established mid-sized firms—in its portfolio, the firms’ average age is 52—to fuel growth as part of what he says is a long-term investment. “We hold companies for five, 10, 15 years—whatever makes sense,” he says.

In September, PE Hub—an online news site for the private equity world—reported that Bernhard’s firm had raised about $700 million for a second fund, which has a target of $1 billion.

“We’re going to stay focused on what we do well and find great management teams in this space that have opportunities to move quicker than in the past,” says Jeff Jenkins, a Bernhard Capital partner and former Shaw executive. 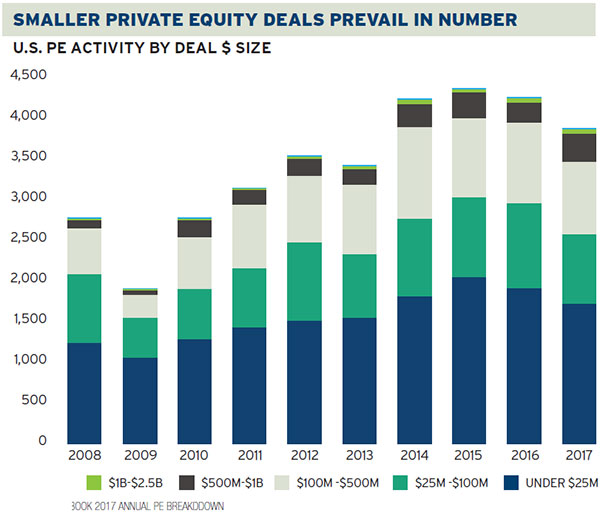 Private equity investors have been fueling deals in the design and construction sector since the dot-com bust in the early 2000s. But with more investor cash within a booming economy, PEs are ramping up investments and seeking new niches that are helping industry firms to change corporate directions—but with payback in mind.

According to Pitchbook Data Inc., which analyzes overall PE investment metrics across all industries, PE firms raised a total of $648.4 billion from 2015 through 2017—the most over any three-year period in its sample. Pitchbook also says the median fund size climbed from $225 million in 2016 to $292.5 million last year—another database record.

“So many firms are chasing deals that it is creating the most competitive investment climate in more than a decade,” said Canada’s Globe and Mail newspaper in an analysis earlier this month. “The key questions now are where all of this money will get invested, and how can that cash earn solid returns in a global market where asset values—from corporations to public infrastructure to real estate—are already seen as bloated.”

“The volume of private equity ‘dry powder’ will outpace the number of quality targets. The competitive pressures do not appear to be abating anytime soon.”

Pitchbook says the volume of PE “dry powder” will outpace the number of “quality targets.”

Adds Hugh Rice, senior chairman at construction financial management firm FMI: “There’s a lot of PE money on the sidelines.” He says while many PE investors are “industry-agnostic and are just looking for firms with repeatable earnings,” they shy away from many construction firms because of higher-risk issues.

Even so, some recent PE-ownership forays have been more risk-accepting.

PE investor Apollo Global Management in 2015 paid $300 million for a 20% stake in CH2M, which was in a weakened condition due to losses on fixed-price contracts. Jacobs Engineering’s $3.27-billion acquisition last year of the engineer-constructor appears to have returned the investment.

According to reports, the bid involves $1 billion in equity and the rest in debt. Brookfield intends to reorganize the U.S. unit—in trouble from two over budget, fixed-price nuclear projects in the U.S. Southeast—so it can bid for nuclear power work in Saudi Arabia. If court-approved, the purchase is set to be completed in the third quarter. Brookfield also was reported to have eyed a purchase of the Canadian business of the now-collapsed British construction giant Carillion.

But the core of PE investment activity remains in the middle market. “Despite growing fund sizes, the proportion of deals in various size buckets remains relatively unchanged, with 89% of volume in the sub-$500 million deal range,” says the Pitchbook market report (see chart, above).

One firm aiming to do that is Katerra, which announced on Jan. 24 an $865-million new financing from a tech startup investor known as a disruptor to create what the firm says is an entity that is "redefining the construction industry."  Katerra's founder had launched a PE firm and was CEO of a tech startup, but other key managers are former industry executives from firms such as WSP, Kitchell Construction and architecture firm Miller-Hull.

Katerra is targeting the residential and hospitality market sectors, and says it has $1.3 billion in bookings.

“With that much cash and so few really good businesses out there to invest in … engineering and architecture starts to look attractive because it’s such a fractured industry that’s ripe for consolidation,” Colvin Matheson, managing director of Matheson Financial Advisors, says. Further, with pressing ownership transition issues, “you’ve got that next generation interested in gaining independence, but it doesn’t have the capital to take out the founders,” he says.

“Private equity starts to look like an interesting solution, if you’re willing to take on a financial partner,” says Steven Gido, partner at design-firm deal broker and financial-services consultant Rusk O’Brien Gido. He says the PE trend “has completely changed the M&A landscape.” PE-backed “platform” firms have become “some of the most aggressive consolidators of other niche AE companies.” 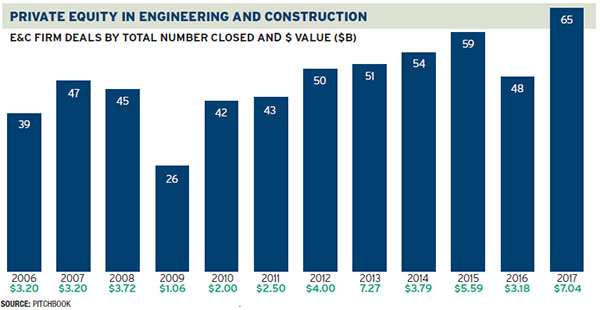 For some industry firms, PE ownership is a lifeline. Specialty engineer and program manager Versar Inc. felt the harsh reality of being a publicly traded company when, by 2016, the firm took nearly $19 million in noncash charges against revenue, which triggered issues with lenders and a likely delisting by the New York Stock Exchange.

At a tough crossroads, Versar’s board sought solutions from up to 150 strategic and financial sources. Private equity firm Kingswood Capital saw a chance late last year to take Versar private and stabilize its financials, despite what might be seen as a $1.5-million fire sale.

“We tend to gravitate toward AEC investments with a specialization or focus in a certain market that differentiates them from the rest of the competitive landscape.”

However, Mick Morrissey, partner at AE sector deal-broker and financial advisor Morrissey-Goodale, says that, with PE firms’ focus on high performance, one risk is that the acquired firm “cannot perform at their target level.”

PE investment or acquisition “can be an adjustment for companies not used to having to answer to other owners” that want more management accountability to ensure return on investment, says Miller.

Engineering firm Apex Cos., now on its second PE owner, says it considered an employee stock ownership plan (ESOP) and a strategic acquisition before agreeing to the first purchase, in 2006, by Blue Point Capital.

“We ruled out an ESOP because the valuations would not be where we wanted them, and selling out to another firm provides just one bite at the apple,” says Chairman Peter Young. He adds, “Over time, more in-depth financial reporting was put in place, which was a little more burdensome but helpful overall.”

In 2010, Apex’s managers pushed the second sale to Tailwind Capital “because we felt it was a great time to sell, and we were going to remain in our management capacity,” Young says.

“If you ask most firms where they see themselves in five years, they’d consider that a long-term view. So, it’s interesting that private equity, which often holds for four to six years, gets the label of having a short-term approach.” Young contends that Apex’s track record of “consistent positive cash flow” enables PE investments with debt. “Not every firm in the AEC industry has this,” he observes.

Target Engineers chose a private-equity ownership stake to fuel its growth in a 2016 deal with Keystone Capital that gives the PE firm a 65% stake, says CEO Raj Rangaswamy. “PE was the best of both worlds. It reduces our financial risk, and we still run operations,” he contends. Rangaswamy says the firm signed a letter of intent for a strategic acquisition by a larger design firm. But during due diligence, firm managers saw signs that they would lose significant independence. “When we considered Keystone, they had separate meetings” with all our staff members, he says.

The Target purchase is the latest of four investment “platforms” for Keystone, says Managing Director Jason Van Zant. “AEC firms are not being created at the same rate as they were in the past, and the need for capital and liquidity to grow has probably never been greater,” he notes. “The younger generation of many firms are not willing to take on the level of financial risk that, in many cases, the older generation was.”

He says Keystone “gravitates toward AEC investments with a specialization or focus in a certain market.”  The PE firm’s first acquisition platform—curtain-wall design firms—resulted in doubled revenue and profits that quadrupled, while the second, in pipeline engineering, eventually was sold to Jacobs Engineering. It has another in health-care design and, through the Target purchase, now a fourth in transportation.

“Although the AEC sector is not for everyone in private equity, we have been attracted to it mostly due to its asset-light nature and high cash-flow generation,” says Van Zant. “Keystone is different because it only invests the personal capital of the partners, and therefore we do not have a fixed time horizon. On average, it is involved with its businesses for 10-plus years.”

“You’ve got the next generation [of management] interested in gaining independence, but it doesn’t have the capital to take out the founders.”

PE firm DC Capital expanded its specialized focus on U.S. government services in December by buying Janus Global Operations, which does munitions cleanup and other services for public clients. No price was disclosed, but the firm closed last spring on a $450-million government-services equity fund.

PE firm New Mountain Capital’s $555-million purchase of TRC Cos. Inc. last year also took private that publicly held engineer-CM firm to build an infrastructure-services platform. The price was a 47% premium over its share value, according to stock analysts.

Just getting started is a PE-backed platform in architecture called ArcNorth, says CEO J. Gordon Bettenmiller, a former chief financial officer at HOK. “We see a clear need for succession and liquidity among very successful midsize firms that frankly do not have very many good options to sell at a fair value,” he says. “We expect to realize incremental growth from cross-marketing across practices.”

Bettenmiller declines to identify ArcNorth’s “equity partners,” but says its targets are firms with net revenue between $5 million and $50 million.

“We have a very growth-oriented partner who would like to see us … at least double in size in four to five years, with an ultimate hold period of five to seven years. We envision the most likely outcome being acquisition by an even larger PE firm that will continue the firm’s growth for another five- to seven-year run.”

Even so, risks ahead for PE investors include the Trump administration’s tax changes that now limit interest expense deductions on debt, which could affect the cost of capital and valuations, observers say.

Also, says Van Zant, “we’re in one of the two longest economic expansion cycles on record, which probably means at some point we will see a down-draft in the economy.”