This website requires certain cookies to work and uses other cookies to help you have the best experience. By visiting this website, certain cookies have already been set, which you may delete and block. By closing this message or continuing to use our site, you agree to the use of cookies. Visit our updated privacy and cookie policy to learn more.
Home » Calif. Dept. of Water Resources Shakes Up Leadership After Oroville Forensic Report
ProjectsWater & Dams

Following an independent report’s sharp criticism of its dam safety culture, California’s Dept. of Water Resources named a new director and restructured its executive team as work crews continue a $500-million project to repair the spillways at Oroville Dam.

The forensic report cited “long-term systemic failure” at the DWR and laid bare the agency’s decision-making processes during the February crisis. The investigative team cited inherent flaws in the construction and design of the tallest dam in the U.S. and pointed to the failure of agencies, regulators and the dam industry in general to recognize and address these weaknesses. 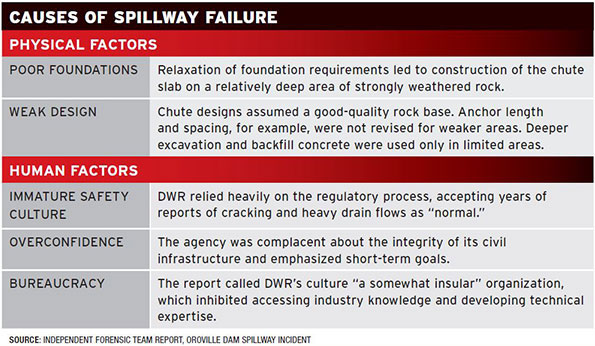 Five days after the report’s Jan. 5 release, the agency appointed as director Karla Nemeth, previously deputy secretary and senior adviser for water policy at the California Natural Resources Agency. Nemeth is DWR’s fourth director since December 2016, when Mark Cowin retired after six years as director and 36 years with the agency.

Further, the agency is replacing a single deputy director position with two separate executives, one responsible for flood management and dam safety and the other heading integrated water management.

The moves follow the report’s recommendation that DWR adopt a “top-down” dam safety program. A single DWR executive responsible for dam safety would be better prepared to make the necessary risk trade-offs in critical decisions, the investigative team wrote.

A massive rainstorm prompted dam officials on Feb. 7 to release water down the main spillway, damaging the concrete chute and exposing the weak rock beneath, the report says. Officials closed the spillway gates, but as lake levels continued to rise, decision-makers faced a choice between opening the main spillway once more or allowing the lake to overflow into the never-before-used emergency spillway.

Officials opted for the middle ground, releasing only minimum flows down that spillway and hoping to protect a nearby powerhouse and transmission tower. Water overtopped the emergency spillway, eroding the hillside and prompting the evacuation of nearly 200,000 people downstream.

Dam officials were forced to release more water through the main spillway, which ultimately gouged a 1,100-ft-long, 200-ft-deep trench in the structure and undercut the emergency spillway.

While the Oroville event has prompted the reevaluation of 93 similar dams around the state, the report recommends developing a set of unified and integrated guidelines on dam engineering and safety.

“DWR is using a fruit-salad mixture of guideline specifications that they have not defined formally,” says Robert Bea, professor at University of California, Berkeley’s Center for Catastrophic Risk Management. He urges DWR to appoint leaders with significant experience in risk assessment and management associated with dam safety.

In November, Kiewit Infrastructure West crews completed the first phase of the repair project at Oroville Dam. Improvements to the emergency spillway continue over the winter, and work on the main spillway will resume in May.