In the wake of the unexpected election of Donald Trump as president, the surge in market optimism among construction executives in the fourth quarter of 2016 has taken on an even greater intensity in the first quarter of 2017. There is a growing belief among industry execs that the market will continue to expand. 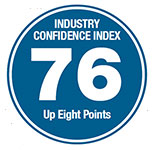 The ENR Construction Industry Confidence Index rose sharply for the second straight quarter. It shows that, of the 263 executives of large construction and design firms responding to the survey, most believe market growth will continue at least through the middle of 2018. The CICI index was 76 on a scale of 100, up eight points from the fourth quarter of 2016 and 18 points higher than the third quarter.

The CICI measures executive sentiment about the current market and reflects the respondents’ views on where it will be in the next three to six months and over a 12- to 18-month period. The index is based on responses to surveys sent out to more than 6,000 U.S. firms on ENR’s lists of leading general contractors, subcontractors and design firms, from Feb. 10 through March 6.

However, unlike last quarter, the upsurge in CICI ratings did not affect all market sectors. The CICI ratings for eight of the 15 market categories we survey actually declined in the first quarter, particularly in the buildings sector. But only the petroleum sector appears to continue to decline. Most execs polled in this quarter now see work in the sectors they serve continuing to grow for at least another year.

Also, the soon-to-be-released results of the latest Confindex survey from the Construction Financial Management Association, Princeton, N.J., show that, similarly, executives are more optimistic about what the upcoming year has in store. CFMA each quarter polls 200 CFOs from general and civil contractors and subs.

The CFMA Confindex is based four separate financial and market components, each on a scale of 200. A rating of 100 indicates a stable market, while higher ratings show market growth or conditions that should foster growth.

The industry believes Trump’s election may boost business prospects. “The Trump bump is part of the reason the Confindex is up 12% in the past year,” says Anirban Basu, CEO of economic consultant Sage Policy Group Inc., Baltimore, and CFMA economic adviser. Industry execs like many elements of the Trump agenda, including general deregulation; an easing of bank regulation, which may allow banks to more freely lend on real estate development projects, and Trump’s infrastructure plan.


The Cost of Cash

However, Federal Reserve Board Chair Janet Yellen has hinted about a possible rise in interest rates. The strong job-growth report, released on March 10, may give support to a March hike in the federal funds rate.  “While bank deregulation may make it easier for banks to lend on real estate, it may get more expensive to borrow,” says Basu. This conflict in policies may be why the Confindex’s “financial conditions” rating did not rise this quarter.

The power sector also had a significant drop, falling five points, to 62, while the petroleum sector continues to be sluggish, down four points, to 49.

On the other hand, confidence in the transportation market continues to rise. The CICI rating for that sector rose five points, to 75, the highest-rated market in the survey. The water-and-wastewater sector also rose a point, to a 69 rating.

Binstock warns that the expanding market brings its own concerns to firms. “The skills shortages being felt in the industry, coupled with a tightening of immigration policy by the Trump administration, could bring about heavy pressure on labor costs.”

Further, Basu warns that materials prices are beginning to rise again. In the CICI survey, 70.7% of respondents say they have seen upward pressure on materials prices. In the survey, the most frequently cited examples of materials price increases were steel, concrete and copper.

While many in the industry believe the new administration’s agenda will be good for the market and the economy, many execs are taking a wait-and-see attitude. “The president has to make progress in Congress on his agenda, or things like the stock market and the construction market may change direction rapidly,” says Basu.