But the transportation funding landscape has changed

Last year’s passage of the Fixing America’s Surface Transportation (FAST) Act may have provided the nation’s transportation agencies with more funding certainty, but the project planning and implementation landscape is substantially different than the one covered by the previous, multiyear bill.

Many states have beefed up their own road and bridge funding mechanisms with increased or restructured gas and sales taxes, providing a new revenue stream to help dig into lengthy project backlogs. In Pennsylvania, for instance, Act 89, a 2013 law to modernize the state’s transportation funding structure, promises to add as much as $2.4 billion for transportation by 2018. The additional funds will allow the state to undertake major projects such as the $157-million northern section of the Central Susquehanna Valley Transportation project and the $2.5-billion, multicontract rebuilding of an eight-mile stretch of I-95 in Philadelphia. Due to the state’s FAST funding remaining roughly unchanged from previous years, notes PennDOT Deputy Secretary for Highway Administration Scott Christie, “Act 89 helps us make sure we know how much money is available so we can get big projects into our budget.” 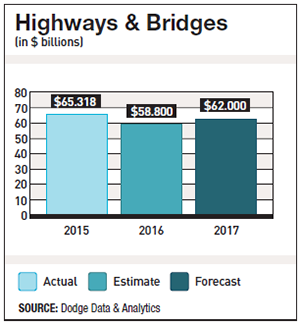 Many of these initiatives encountered stiff resistance on their way to enactment. New Jersey’s 23¢ gas-tax increase came only after a summer-long standoff between the governor and legislators. “Citizens, legislators and businesses want to know you are doing things the right way and that you’re using those funds as efficiently as possible,” says Paul Trombino, director of the Iowa DOT and current president of the American Association of State Highway and Transportation Officials. He adds that transparency measures, such as Iowa DOT’s annual report to the state Legislature on project programming and expenditure amounts, “helps people feel comfortable with how decisions are being made.”

States also have greater familiarity with the various project delivery tools at their disposal, though the conventional design-bid-build method is hardly an endangered species, due in large part to the method’s routine administrative efficiencies. PennDOT uses alternative delivery for only about 25% of its projects, due in part to the state’s high success rate with its design process and letting schedule, says Christie. Like other states, Arizona’s DOT is making use of public-private partnerships—for example, on the $916-million, 22-mile South Mountain Freeway, near Phoenix. The participating private firms include Fluor Enterprises, Inc., Granite Construction Co. and Ames Construction.

Retirements and budget-imposed staffing cutbacks have limited state DOT resources. While consultants are increasingly called on to fill the personnel gap, operational efficiency remains a priority. As part of a statewide efficiency enhancement effort, ADOT conducted an eight-project pilot study that applies continuous improvement principals to its task-order contracting system. ADOT reduced to 50 days a process that typically required 150 days. “Projects that aren’t part of the pilot program are also being contracted in less time because we’re learning how to do things better,” Hammit says.