Owners and Contractors At Odds on Project Cost Solutions

Groups see standardization as a solution but don’t agree on who leads to deploy it, says researcher.

Capital expansion is down 30% among owners studied by research firm Independent Project Analysis Inc., with Phyllis Kulkarni, its North American director, telling ENR’s Oct. 11 Global Summit in New York City that projects “are under immense pressure to cut costs.” She noted weak growth in the next few years in most markets, although chemicals and consumer product sectors are “bright spots, particularly in the U.S.” Kulkarni said owners with cash-flow constraints are “putting the brakes” on project costs, with research indicating they are “more optimistic” than contractors about the benefits of solutions such as standardization (see charts). She also noted a “pretty significant slip” in the duration and quality of project engineering, with potential impact on field productivity. Only 60% of owners define an executive as the project “sponsor,” said Kulkarni, who encouraged managers to cut the number of project “interfaces” and to better manage them. 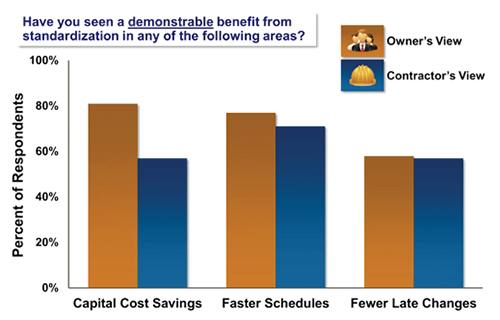 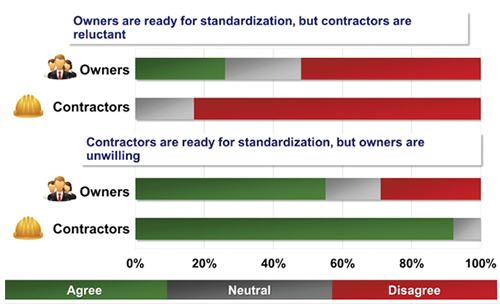 Wittmann says despite “prior optimism for a surge” this year in  U.S. transportation work after passage of the 2015 highway bill, he sees better results for sector firms in 2017, “with exposure to these positive markets offsetting commodity-induced weakness.”

Wittmann expects continued merger-and-acquisition activity, including from new international buyers, but “finding suitable targets is a limiting factor,“ he says. The analyst says restructuring efforts have in some cases distracted management from focus on customer service and is generating “larger-than-normal turnover and poaching of top-producing talent.”

Thella Bowens, president and CEO of the San Diego Regional Airport Authority, is named the Construction Management Association of America 2016 Person of the Year “for innovatively managing” the agency’s $3-billion capital program, it said. CMAA cited her for boosting LEED sustainability standards on airport projects and more use of alternative delivery methods.