Industry Weighs in With Cash in U.S. Campaigns

In an election year in which the two presidential candidates are presenting starkly different views about their approach toward governing and the state of affairs in the U.S., many construction industry groups are keeping low profiles in the top contest, instead focusing their attention—and resources—on congressional races. But Democratic nominee Hillary Clinton’s push for infrastructure investment has attracted strong support and big dollars from the building trades.

Construction industry groups say their 2016 election contributions are on par with their contributions in the last presidential election cycle; some say they are planning to give more.

The Center for Responsive Politics, a nonprofit, nonpartisan research group in Washington, D.C., that tracks federal campaign spending, said that, as of Sept. 21, donations to federal candidates, parties and outside political groups linked to construction industry associations and companies totaled $73.2 million, compared with a total of $125 million in the entire 2012 election cycle.

As of that date, building trade unions had given $33.1 million, up from $25.2 million in 2012. Based on data disclosed to the Federal Election Commission, the center’s totals (see chart below) include donations from an organization’s political action committees and from employees and its own treasury, says its website, www.opensecrets.org. The website was set for an Oct. 20 update on 2016 spending, says a spokeswoman. 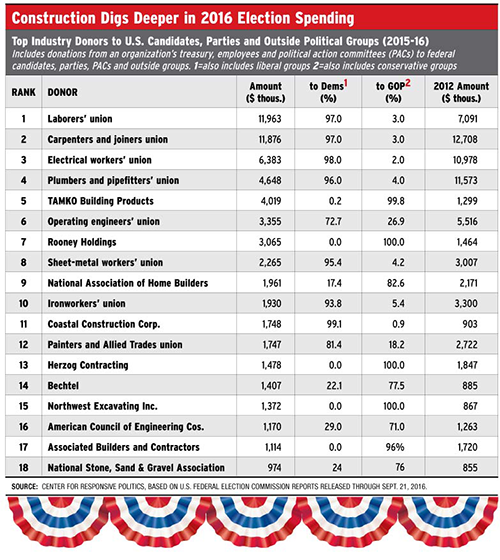 The laborers’ union (LIUNA) leads the industry’s election spenders this cycle, with nearly $12 million. Although it criticized the Obama administration for opposing the Keystone oil pipeline, Yvette Pena-O’Sullivan, assistant director of legislative affairs, says the union is “comfortable” with Clinton’s positions on energy, particularly her emphasis on the idea that natural gas is a bridge fuel to lower-carbon options. “She understands the realities of U.S. energy needs,” says Pena-O’Sullivan.

The International Union of Operating Engineers, with election donations totaling about $3.3 million so far, also endorsed Clinton. The union was impressed with her command of details in the party infrastructure investment platform but turned off by Donald J. Trump’s less defined investment commitments and use of nonunion labor on projects in his own real estate empire, says Greg Lalevee, a union vice president and business manager of a large New Jersey local.

Clinton, who spoke via teleconference at a recent union board meeting, “knew infrastructure cold,” he says. "She was very in the weeds on roads, sewer, water [investments]. She was dead on it," Lalevee adds.

“If building a wall with Mexico is Trump’s infrastructure plan, we’re not interested," he says. "The country can’t afford [his] massive learning curve.”

The carpenters’ union website trumpets its support for Clinton, but 26% of its $11.8 million in donations also supports Republican candidates in other races. The union did not return requests for comment. Pena-O’Sullivan says her union wants to help “flip” the House and Senate to Democratic majorities.

The Associated Builders and Contractors, which usually supports the GOP presidential nominee early, has not endorsed a candidate this year. Instead, ABC is focusing on maintaining Republican majorities in Congress. “We are supporting candidates that embrace the free enterprise system that we know is most conducive to industry growth,” says Chris Singerling, ABC senior director of political affairs.

To date, the group has contributed to 250 congressional candidates, some from each party, he adds. So far, ABC’s PAC has donated $1.1 million to federal candidates and committees.

Marco Giamberardino, National Electrical Contractors Association executive director of government affairs, says that, traditionally, NECA has stayed out of the presidential races. “We will work with whoever is elected,” he says. NECA’s spending this year is on par with 2012. “We received more contributions than last cycle, and we’ve invested in the congressional races accordingly,” he says.

Steven Hall, American Council of Engineering Companies vice president, says his group plans to give more than $2 million to federal congressional candidates, up from a total of $1.2 million in 2012. “We’ll likely end this cycle with a 60-40 [Republican-Democratic] split.” ACEC members are “very engaged,” and contributions have poured in, he says. “That has allowed us to reach further down into the ranks, support more new lawmakers … and broaden our reach into committees beyond infrastructure and tax,” Hall says.

The Associated General Contractors has raised more than $933 million in the election cycle to date, says a spokesman.

"Infrastructure investment has been an area of bipartisan agreement for ages, and remains so today. This and opposition to the TPP appear to be among the more visible areas of presidential candidate agreement this election cycle," says  Andrew Wittmann, industry sector research analyst for investment firm Robert W. Baird & Co. "Clinton wants to add a five-year, $275 billion package to the existing $305-billion highway bill, and Trump said he’d do double that. "

But adds Wittmann, "The problem is neither mentioned how they’d pay for it, therein lies the problem. Paying for the $305 million FAST Act was difficult enough to pass and find the money. In that case Congress had to use creative finance such as selling a portion of the Strategic Petroleum Reserve to raise funds to pay for it.

He adds: "Congress has proven that it can only solve pressing issues with a hard deadline. With the FAST Act providing relatively steady funding through 2020, that presents the unlikely situation whereby Congress would need to proactively fund incremental and record spending on infrastructure. This would be a tall task, in our opinion, if divided government continues."

Some industry firms also have emerged as major donors, according to the center’s database. Most heavily favor Republican candidates and interests, but Florida-based Coastal Construction appears to have a more personal interest in earmarking 99% of its listed $1.7-million spending to Democrats. Patrick Murphy, son of the family-owned contractor’s CEO, Thomas P. Murphy Jr., is a Florida House Democrat elected in 2012 who now is challenging unsuccessful presidential contender Marco Rubio (R-Fla.) for his Senate seat.

The elder Murphy did not respond to ENR requests for comment, but Florida media say the company donated $556,000 to his son’s campaign and to a supportive super-PAC. A Fort Myers News-Press report says that, since 2012, Rep. Murphy has received about $300,000 from developers that used the EB-5 visa program, which provides green cards to foreigners who invest at least $500,000 in U.S. projects. Murphy was a co-sponsor of two 2014 bills to make the visa program permanent, but his campaign says the donations did not influence his support, the newspaper adds.

Industry giant AECOM has a fairly even partisan split in its $495,000 PAC spending and is “very hopeful” that the winners will commit to “major improvements in infrastructure investment along with long-term funding streams,” says a spokesman.

Bechtel’s official PAC donated $363,000 of the center’s $1.4-million listed total, says Vice President Charlene Wheeless. “Beyond that, an individual’s contributions are of their own making, and we don’t encourage, endorse, restrict or in any other way get involved,” she says.