The Groundbreaking Women in Construction conference also generated debate over issues of "tokenism" for women climbing the ranks, and explored how employers are recognizing bias concerns of LGBTQ+ professionals that could affect productivity and corporate bottom lines.

The conference, hosted in San Francisco on May 23-24 by ENR and law firm Peckar & Abramson, drew more than 750 industry men and women at all corporate levels.

While McKinsey's study of 279 companies shows gender balance in entry positions, at the manager level, white women trail white men, 27% to 46%, and hold 24% of positions at the vice president level compared to 59% for white men, said partner Shannon Peloquin.

Women of color make up 12% of manager-level positions and 6% of VP positions.

“Men are one-third more likely to get promoted than women. That first promotion becomes really really important,” she said.  For every 100 men who are promoted, 79 women are promoted, dropping to 69 for women of color, the study showed.

“It’s pretty stark,” Peloquin said, even more so in construction. For E&C firms, a smaller study subset in the McKinsey study, women comprise 14% of vice presidents, compared to 29% across all businesses.

“Most men are passive about gender advancement,” said Ted Lower, a former design firm CEO who now is a human resource and leadership coach as head of consultant LVNV Group. "I have been with CEOs in this sector for more than 25 years. The main CEO issue is passivity and a tolerance to move the ball along as it has been." 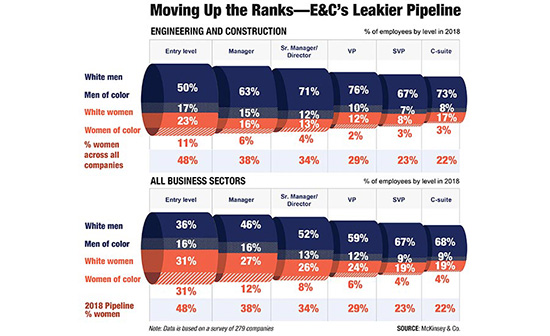 Women and men left their jobs at similar rates across all sectors, according to the study. But in E&C, there is sex-based disparity, with 13% of female senior vice presidents leaving, compared to 8% of men.

McKinsey points to “workplace micro-aggressions” for women that “underpin day-to-day experience,” said Peloquin. About 31% of female respondents said they had to show more evidence of competence, compared to 16% of men.

Women are often assumed to be more junior than they are, she noted. About 36% reported questions on their judgement vs. just 27% of men. Women also report less day-to-day support from their managers, the study revealed.


Men: Don't Look for Yourself, Look for the Best

A panel of male contractor executives acknowledged the disparities and noted efforts by their firms to look past gender in rewarding talent and performance.

"Men, don't look for yourself out there, look for the best," said Jay Tangney, executive vice president of Suffolk Construction, who was tasked with developing "a data set of realities" for women at the company presented to its board.

The firm formed a shareholder-sponsored diversity and inclusion council that outreaches to a number of employee groups, said Tangney, adding that the diversity push "has to be properly funded like any other mission in your business."

Eric Stenman, president of Balfour Beatty Buildings, acknowledged that in the U.S., the firm is "in its infancy" on diversity and inclusion, but has looked deeper into its gender balance in the last two years, with new leadership and a template from its UK-based parent, which must meet just-enacted government rules requiring larger firms to report annually on gender pay disparity.

Massachusetts legislators now are weighing a bill that would require firms with 100 or more employees to report race and gender ratios of senior employees.

"D&I has become a strategic imperative for us," said Stenman. "There are many talented people out there. We have to peel back the layers of the onion."

Chad Mathes, executive vice president of Dragados USA, stressed that outreach to women is for "self preservation. We're doing it because we want to and need to."

Women's leadership coach and author Sally Helgesen counseled women attendees to recognize their behaviors that may impede upward movement, such as expecting peers and managers to automatically notice their contributions. "Our responsibility is to bring attention to what we do," she said, noting that "women tend to pull back so they're not seen as too self-promoting."

Helgesen added that women "overvalue their expertise," which impedes investment in upward mobility.

"Business can't afford to promote you because you’re indispensable," she said. "Men in science and engineering share this overvaluing of expertise but they have the confidence to apply even without all the qualifications."

She encouraged attendees to "challenge your own comfort zone" and "build strategic alliances from day one" to support women's decisions and promote their contributions and opinions.

But women also debated whether tokenism and use of the woman "qualifier" was beginning to obscure the true value of their professional achievements, with employers "checking a box" or overly marketing  their "firsts" or "onlys."

"I really struggle that labels and qualifiers and profiling are defining who I am," said Jacqueline Dompe, an industry veteran who now directs operations in several western states for project management firm JLL.

PCL Vice President Cathy Orquiola said while her professional credibility should be "defined by the ROI and the value I'm driving," she added that "being a woman is actually a differentiator, and being the only woman at the table is a pretty powerful place of influence. I'm able to empower others and bring names forward that perhaps would never be brought to that room or to that table. And so I've kind of come full circle on this."

Lucy Villanueva, project executive at DPR, urged attendees that "however you get in there, the fact that you're there, make something of it."

Industry women and outside experts noted much progress in how women, work peers and employers are responding to workplace harassment and related #Me-Too movement issues since 2018 when they made headlines in many business sectors, including architecture and construction.

New York-based attorney Diana Plue said 10 states now have harassment training and compliance rules, but she acknowledged that most do not require employers to define preventive strategies or offer clear guidance in creating such programs.

Marsha Maytum, principal of Leddy, Maytum, Stacy Architects said that while "laws are important" to handle still-ongoing incidents on jobsites and elsewhere, "having every business do training is an important first step to change." She added, "clear policy comes from leadership, but everyone on staff is the voice of the company."

Monica Ballard, president of Parallax Education in Los Angeles, pointed to need for more focused attention on educating the industry to recognize "unconscious bias," noting that "a lot of people still don't get it."

Attendees representing the industry's LGBTQ+ community also pointed out developing recognition of their workplace challenges and outreach to employees who choose to self-identify.

"If you can come to work, get your stuff done and can really be acknowledged for the whole person that you are, you're doing better work and you're going to get promoted, " said Melody Abiola, an associate at design firm Arup.

Elena Anaya, Turner Construction's community outreach manager in northern California, said the firm is working with local business groups to include more LGBTQ+ construction subcontractors to identify and gain certification to be part of its supply chain.

"One of the hardest things about taking the first step is the ignorance factor," said Andrea Rutledge, president of the Construction Management Association of America.

New generations of industry professionals and leaders are instilling critical culture change also in how people can best get the job done.

By 2020, they will comprise more than 70% of the workforce, said panelists who emphasized changing habits and priorities.

“I have taken a pay cut because I felt that in the long run it would offer me more opportunities to learn and be challenged,” said Lindsey Broderick, a designer at ZFA Structural Engineers in San Francisco.

While still pursuing her career path, Anne Robertson, a master's degree candidate in geosystems engineering at the University of California–Berkeley, advised women peers seeking advancement in a still male-dominated sector to challenge the status quo and not to "wait for the opportunities to come to you.”

Olfa Hamdi, a 30-something consultant and expert in capital project management and advanced work packaging who left a corporate job to become an entrepreneur and now counsels big project owners, encouraged attendees to have a “willingness to embrace change and take chances."

She said: "That construction is resistant to change is a myth.”

Click here for updated information on the 2020 GWIC conference, including guidelines to come in September for submitting topics, issues and speakers.