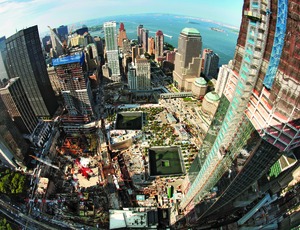 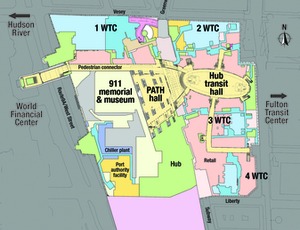 The $19-billion redevelopment of the original World Trade Center, destroyed on Sept. 11, 2001, by terrorists, is loaded with memories of the tragedy. But for the thousands rebuilding the 16-acre site, the work also is loaded with patriotism, indomitable spirit and a collective will to succeed.

That's fortunate because, depending on who is counting, there are at least seven major projects currently under way, each with its own team and schedule but not its own site, at least not below grade. All the projects overlap in a four-level basement.

Consequently, the work is also loaded with challenges.

“To have the opportunity to work on this project is deeply emotional but also something we're proud of,” says Nicholas Holt, a director of Skidmore, Owings & Merrill, which is the architect for the site's iconic skyscraper, the up- and-coming 1,776-ft-tall One World Trade Center.

“We knew there would be lots of opinions and that it would be politically charged. But now that the building is visible, there is “a sense of optimism” in the air, he says.

That optimism is keeping others, still in the trenches, going. The most intense conditions are out of sight, in the warren of the basement that fills the site's expanded “bathtub,” formed by the site's 90-ft-deep perimeter walls. In the four-level structure, different projects share the same mechanical spaces, both horizontally and vertically. In effect, one team's ceiling is another's floor.

“We build to one point, and the next stakeholder builds to another,” says David Worsley, senior vice president for Silverstein Properties, the developer of 2 WTC, 3 WTC and 4 WTC, which together represent a $7-billion investment.

“The idea was to disburse all the facilities through the site to make it extremely difficult to knock out the services,” says Gary J. Negrycz, a vice president of the local Turner Construction Co., which is building the 88-story 2 WTC.

The Port Authority of New York & New Jersey—the landowner investing $11-billion in the project—is responsible for the entire site. This work includes the agency's own projects: the $3.4-billion World Trade Center Transportation Hub, the $3.2-billion 1 WTC, the WTC Vehicle Screening Center and the shared WTC infrastructure and utilities, among them. The port authority is also keeping tabs on Silverstein's buildings.

Complicating matters further, there is a major effort in the immediate area to improve streets and transit services, centered on the $1.4-billion Fulton Street Transit Center.

The hub and the office buildings flank the complex's heart and soul: the $700-million National September 11th Memorial and Museum. The local Lend Lease is building the memorial and museum. Currently, all other project teams are standing aside so that 80% of the eight-acre memorial will be able to open on Sept. 11.