Daredevil aerialist Nik Wallenda safely crossed 1,250 ft above a Grand Canyon gorge last June, thanks to the cable-rigging design prowess of POWER Engineers Inc. But the Hailey, Idaho, power-sector engineer also did some high flying of its own in 2013. 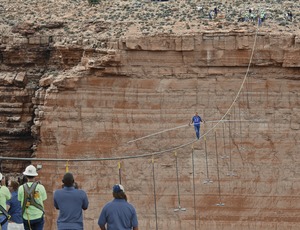 With core work in transmission and delivery and acquisitions boosting diversification, POWER's revenue rose 14%, to $316 million, last year. This pushed the firm to No. 43 from No. 52 on the Top 500 list, which was on top of a 25% revenue hike in 2012.

"Power delivery is the best business out there, and we're well positioned," says CEO Jack Hand, noting that industry is at "peak spend." Growing eastward and westward in the U.S. in 2013, the firm also fortified its environmental, geospatial and architect-led expertise.

Hand, who has led the firm since 1998, sees continued growth in alternative-energy transmission work and power generation.

Lack of tax credits "killed geothermal in the U.S.," but POWER has projects in Turkey, India and Indonesia, among other nations; about 15% of the firm's revenue is non-U.S.

The firm also diversified into federal work and design for the food-and-beverage sector.

POWER, with about 2,000 staff, has been among designers scoring highest over the years in the "happiness quotient," a ranking by industry financial consultant EFCG Inc. that combines revenue and profit to show employee and shareholder satisfaction.

But even as it grows, the firm embraces its culture and the excitement of its work. It still marks the annual anniversary of a 1977 fire that destroyed its first Idaho headquarters with a party called the "Burnout," and Hand terms the firm's work for Wallenda as "really cool."

It also engineered the daredevil's crossing of a Niagara Falls gorge in 2012.

While Hand sees a revenue rise in 2014, this year's focus is on a better bottom-line return.

"The biggest issue was too much opportunity and not enough resources," says Hand.