A $75-million whitewater park on course for completion this summer in Montgomery, Ala., is founded not on a river bed but on two winding cast-concrete channels seated on land, with an artificial 22 ft drop in elevation. The channels will receive 12-million gallons of filtered water and give pro kayakers a place to practice on an Olympic-level whitewater course and beginners a place to learn and have fun.

“What’s crazy about it is you’re just starting from scratch,” without the need to consider floodplains, scour sediment transport or other concerns for in-stream modifications, says Scott Shipley, founder of whitewater design and developer S20 Design and Engineering, which is creating the 120-acre Montgomery Whitewater, featuring Class II-IV whitewater alongside commercial amenities and other outdoor facilities, among them rock walls and a high ropes course.

Drawing a river in the dirt comes with challenges. Among them is the grading needed on the mostly flat site to create the 22-foot elevation drop.

Work was complicated further by several large storms. “You’ll grade all these channels the way you want them, get ready to pour [concrete], then the walls collapse,” Shipley says.

The channels are 16-ft deep and roughly 30-ft wide, though the design widens and narrows to create different whitewater features, and normally requires between 6-8 in. of concrete. The channel corridor, including trails and space for equipment on either side used for Olympic team trials or national-level races, is 70 ft wide. 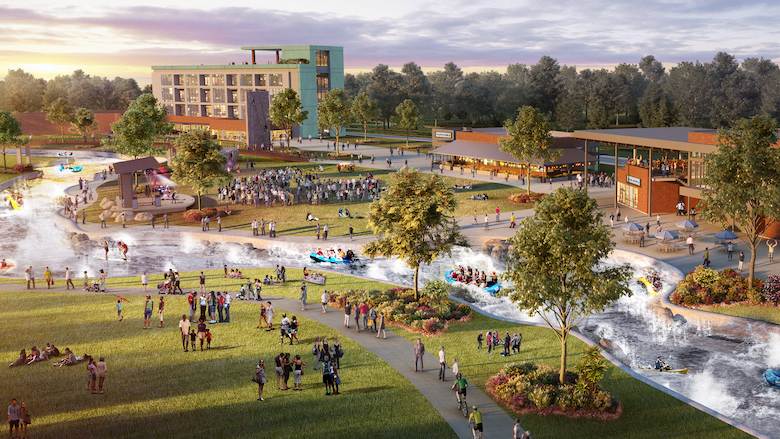 Floors of the channels are cast-in-place concrete. The walls are shotcrete, which allows precise angles needed to match the movable obstacle system.

“From a process, we were trying to create turbulence and trying to create hydraulics to make it interesting,” Shipley says. “That part’s hard. (You need) somebody who really knows whitewater to create a canvas that’s exciting for Olympic athletes and beginners.”

Part of that process is a 1:20 scale and 1:900 flow rate model constructed in the Czech Republic, as well as multiple 3D models, but what Shipley says is the most interesting aspect is the massive pumping station.

When his team was working on the US National Whitewater Center in Charlotte, he says they were ordering the Sweden-made pumps at the same time FEMA was ordering the same pumps to help dry out the Ninth Ward in New Orleans after Hurricane Katrina. The Montgomery project will use five of the largest submersible pumps in the world, capable of filling a swimming pool in 22 seconds, or moving up to 180 cu ft of water per second.

“If you were to stand in front of it, it would be like standing in front of a flash flood,” Shipley says. “I’ve done it. It sweeps out your feet and takes you downriver.”

The pump station is mostly underground at the site, and visitors will walk across it to get from the check-in building to the raft building. Also in the midst of the channels is the mechanical building housing filtration and treatment. While the site is bordered by the Alabama River, water for the park will come from the tap, Shipley says, treated and filtered similar to a swimming pool. Property along the river will eventually be used for trails.

Plans also call for a basecamp building to house ticketing facilities and an outfitter shop with restrooms, a restaurant building with catering kitchen and meeting space, a raft barn, pavilions, hotel and more.

“The idea is the easiest part,” says Megan McKenzie, partner with the Southern Whitewater Development Group (SWDG). “Ideas are easy, but making them possible is what is the most amazing part of where we are and how we got here.”

McKenzie says the local community, including the Montgomery city and county governments, has pushed the project to where it is since she had the idea more than eight years ago.

When it opens, McKenzie says, it will be just the third of its kind in the U.S., alongside the U.S. National Whitewater Center in Charlotte and the Oklahoma City Whitewater Park in Oklahoma City. The park already is starting to bring in development interest in Montgomery the same way those facilities have in North Carolina and Oklahoma.

“This is such a unicorn that we are able to attract some really cool businesses that maybe we would have had trouble landing before,” McKenzie says.

The Montgomery Area Chamber of Commerce has already been leveraging the development in recruiting new industry, giving helicopter tours of the under-construction project to companies eyeing the area for billion-dollar projects, McKenzie says. That has helped elected officials get behind the project, she adds. 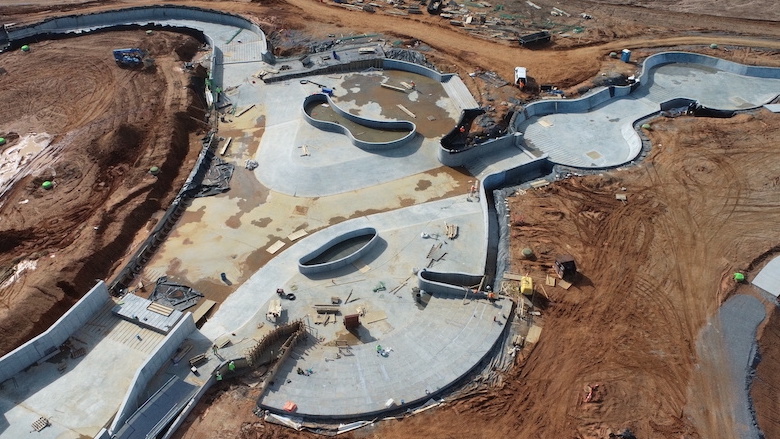 Elected officials see this as a catalyst for high-quality development, she says.

An as-yet confidential hotel project is being pursued by a separate developer at the site, and along Maxwell Boulevard on the other side of the whitewater center’s parking lot, SWDG will work with developers to attract like-minded businesses like breweries, restaurants and more to a pedestrian-focused ancillary development.

All that lends itself to creating a whitewater and outdoor hub in an area not necessarily known for whitewater or outdoor recreation, just as happened in Charlotte after the National Whitewater Center was completed in 2006, Shipley says.

Charlotte, a banking and NASCAR town, is now seen as an outdoor destination thanks to that facility, with the Whitewater Center now that city’s No. 1 attraction, seeing about 250,000 visitors a year—only about 25% of whom actually get in the water.

“There is absolutely going to be a large community,” McKenzie says. “We are providing access to people who maybe have never heard about the sport, never felt safe in a natural river, to get out to Montgomery Whitewater, watch people and think, ‘Maybe I can do it.’”

Their goal in Montgomery is to build that same culture from surrounding areas like Birmingham, Atlanta and Columbus, Ga., Shipley says, and to pull some of the millions who drive up every year from the Gulf Coast to the Smoky Mountains off the interstate to spend some time in Montgomery. He adds that one thing that makes this project unique is its close proximity to the downtown core of Alabama’s capitol city, Interstates 65 and 85, and Maxwell Air Force Base just next door.

“I’m shocked that no one has developed this area before,” McKenzie says. “But once we saw the plans it was kind of a no-brainer.”