With ample public work and an influx of people and jobs, the industry is faring well in Raleigh, even as subcontractors struggle to keep up with the volume. 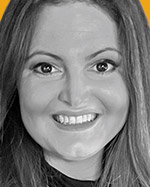 The Raleigh area is one of the hottest markets in the country, driven by top-tier research universities and one of the country’s top real estate markets, says Valerie Bono, director of business development for Barnhill Contracting Co., Rocky Mount, N.C.

Barnhill tracks trends and researches statistics of various economists dialed into the AEC market, Bono says. On a national basis, that information indicates that the second half of 2022 may see construction activity slow down, but not in the Triangle area of Raleigh, Durham and Chapel Hill.

“A buzzword is ‘recession,’” Bono says. “Depending on who you ask, experts anticipate a third-quarter slowdown nationwide; however, many predict that the Triangle will be immune to this recession.”

The Triangle isn’t immune to other challenges the industry is facing nationwide, though, including material shortages that Bono described as unprecedented.

“The construction industry as a whole is faring very well in Raleigh,” she says. “The direct COVID-19 impact seems to have run its course regarding its implications for construction.” 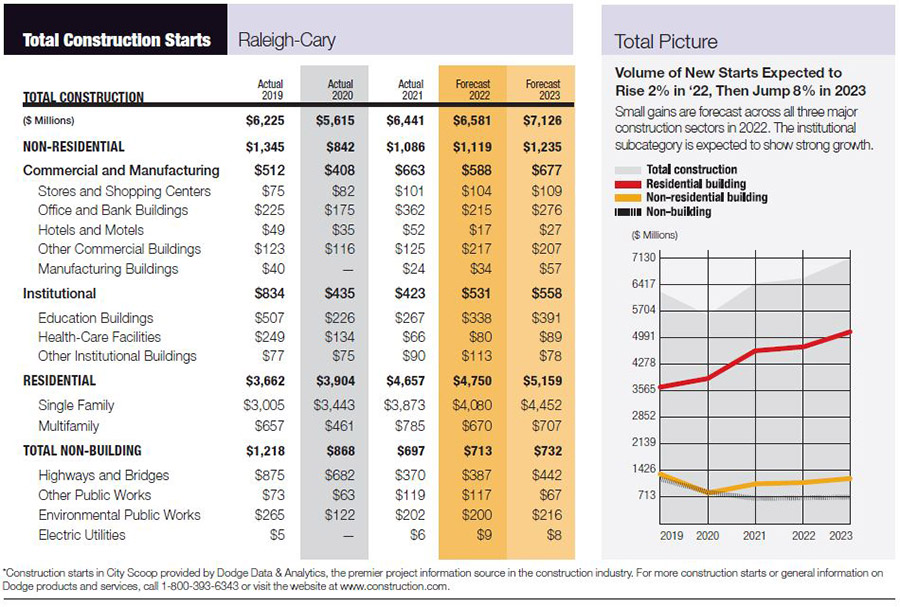 Reinforced concrete pipe is a great example, she says, as many contractors substituted HDPE pipe only to find out it was unavailable too, with firms ultimately turning to substitutes like corrugated steel pipe.

“Capacity in the subcontractor market is particular challenging,” she says. “They don’t have the manpower or experienced tradesmen to keep up with the volume of work. Budgets set two or three years ago are obsolete.”

If there is a recession, it will help with material prices and availability, Bono says. For now, there’s more than enough work to go around.

“This influx of work is leading to more joint ventures and strategic partnerships to free up bench strength and manpower while influencing larger, national/global firms to enter the Triangle market,” she says. “Among the architectural and engineering community, we are seeing more mergers and acquisitions take place.”

In nearby Cary, Barnhill is working on Fenton, which includes 345,000 sq ft of retail, restaurants and entertainment space, 200,000 sq ft of office space, a 175-key hotel and a 357-unit apartment community, Bono says.

Apple also announced a $100-million fund to support school and community initiatives and $110 million in infrastructure spending in the Triangle and across the state.

In the public sector during this off-cycle election year, Bono says many firms are waiting to learn the fate of numerous bond programs on the ballots, including a $275-million parks bond being considered by the Raleigh City Council, $531 million in bonds for public school construction in Wake County and a $553-million bond for expansion at Wake Technical Community College.

“Today, we are seeing more public work than the state has ever seen,” Bono says. “We expect to see an increase in construction manager at-risk opportunities compared to single prime hard bids.”

More owners are seeing the benefit of construction management at-risk as a way to avoid getting a low-cost bidder on public work with poor performance; and with fewer hard bids, Bono expects to see more opportunities for design-build and public-private partnerships.

As more jobs and people continue to relocate to the Triangle, multifamily housing, investments in public spaces and funding for schools, parks and community centers are all on the way up too, she says.