Massachusetts tops the ranking of last year's “top 10 states for green building,” followed by Illinois and New York, according to the U.S. Green Building Council, which developed the popular LEED green-building certification system. At the other end of the spectrum, Wyoming had no LEED-certified projects in 2022, according to USGBC. West Virginia had just one. Oklahoma, North Dakota and Montana round out the bottom five.

The rankings, released by USGBC Jan. 17, are based on LEED-certified gross square footage per capita over the year. If based on total square footage of LEED certified projects, California would top the .

More than 1,800 U.S. projects achieved certification in 2022, for a total of nearly 353 million sq ft of area, according to the group. Last year “was a strong year for LEED certifications across the U.S.,” Peter Templeton, president and CEO of USGBC, said in a statement.

Massachusetts has 96 buildings that were certified last year, totaling more than 26.4 million sq ft, or 3.76 sq ft per capita. Illinois ranks No. 2 with 3.48 sq ft per capita spread across 91 projects. It is followed by New York, California and Maryland, according to USGBC calculations, based on its data and U.S. census records.

USGBC also notes that Washington, D.C., would lead the per capita ranking, if it were a state, with more than 46 sq ft of LEED-certified space per capita. The district would consistently top the annual list thanks in part to the federal government and local commitments to green building, says USGBC. There were 115 D.C. projects with a total of 31.8 million sq ft certified last year.


LEED is a metrics-based rating system administered by USGBC that accounts for factors like carbon emissions, use of energy and water, materials and indoor environmental quality. Since it was established in 2000, USGBC says more than 100,000 projects totaling 11 billion gross sq ft have achieved LEED certification globally. 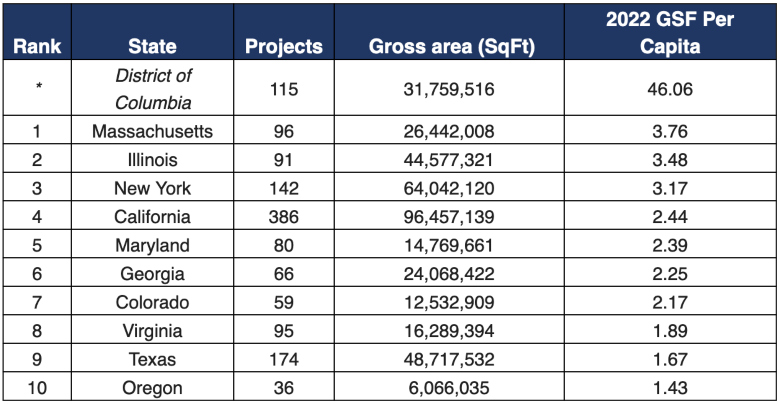