Inflation, rising interest rates and a possible global recession continue to top the list of forecasters’ concerns for the coming year.

“The key issue facing the economy now is inflation, [which is] determining its path as we move forward,” says Richard Branch, chief economist at Dodge Construction Network. While he says the Federal Reserve was “a little late to the party,” a reference that it kept interest rates too low despite signs of post-COVID-19 economic recovery, the central bank now is aggressively raising them to reign in further inflation impacts. Should this be successful, Dodge expects rates to steady in the first quarter. “That should allow the economy to stabilize and start to recover in the back half of 2023,” Branch says. His forecast expects the U.S. to avoid a “technical” recession, but in many construction sectors, “it is going to feel recessionary,” he says.

Jay Bowman, a principal of industry management consultant FMI, expresses a similar sentiment. “Old economy” sectors such as hospitality and entertainment are likely to slow in the coming year, he says, while the “new economy”—represented by data centers, manufacturing plants and warehouses—won’t be tied to the overall economic outlook. 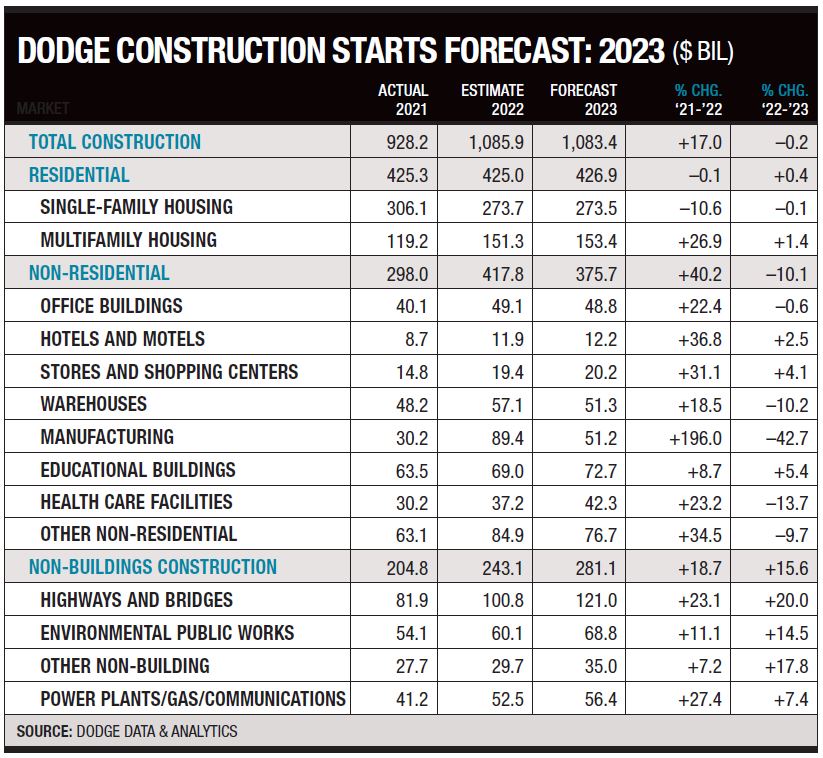 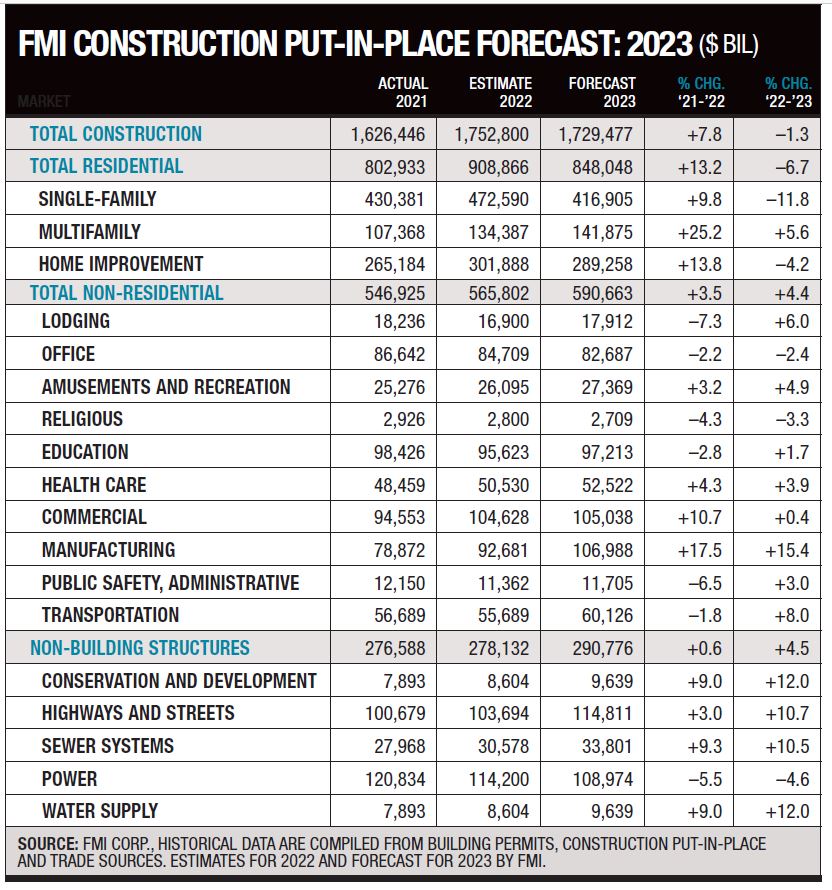 After years of strong growth, housing starts are declining, mostly due to higher interest rates. “Activity across different types of construction has been uneven, with single-family housing pulling back under the weight of the increasing interest rates,” says Julian Anderson, president of cost consultant Rider Levett Bucknall. While the overall construction outlook is “mixed,” he says single-family housing will “continue to struggle.”

Alex Carrick, chief economist at ConstructConnect, agrees. “The Fed is being aggressive in raising interest rates to slow the economy and fight inflation. First to be affected is the residential component of total construction,” he says. “New or resale home affordability is taking a hit from a more than doubling of mortgage rates. Housing starts have recently set out on a downward path.” ConstructConnect forecasts that residential construction’s total dollar value will decline 2.7% by the end of 2022, with a 0.4% drop next year.

Measuring the total number of residential starts, Dodge forecasts a 0.1% drop in 2022, with a slight increase of 0.4% in 2023. Single-family starts are down 10% through the end of the year, and are expected to fall 0.1% next year, according to Dodge. Multifamily construction had a strong 2022, with a 26.9% increase, but growth is expected to contract to 1.4% next year.

“As the economy starts to slow down, household growth slows down,” Branch points out. The downturn reduces the previously high demand for new multifamily construction, as more people choose to live in family homes, or with roommates, to weather the economic storm. 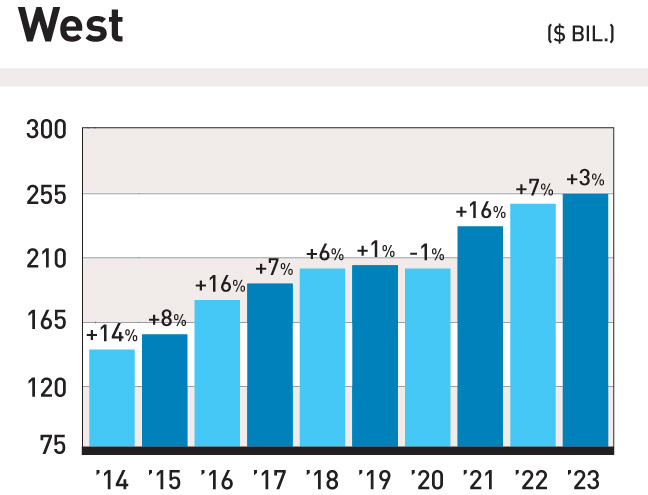 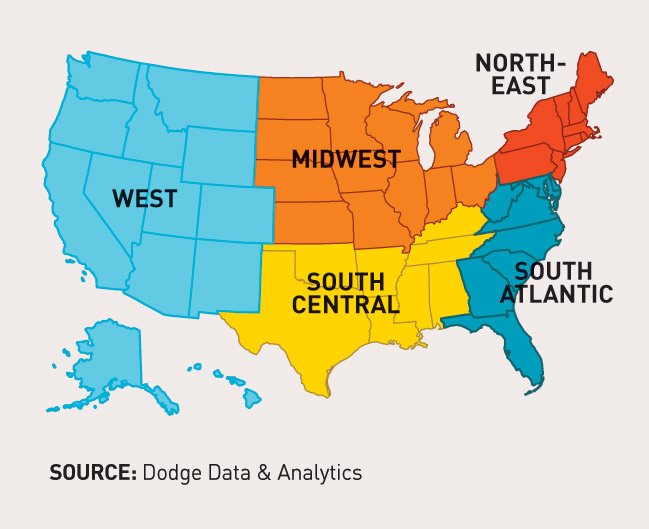 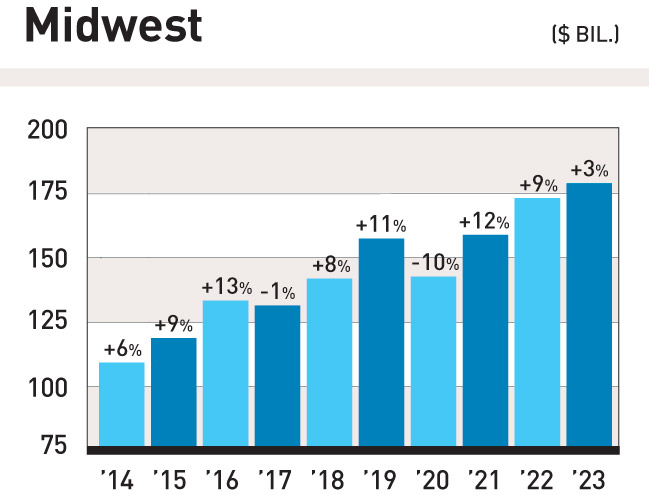 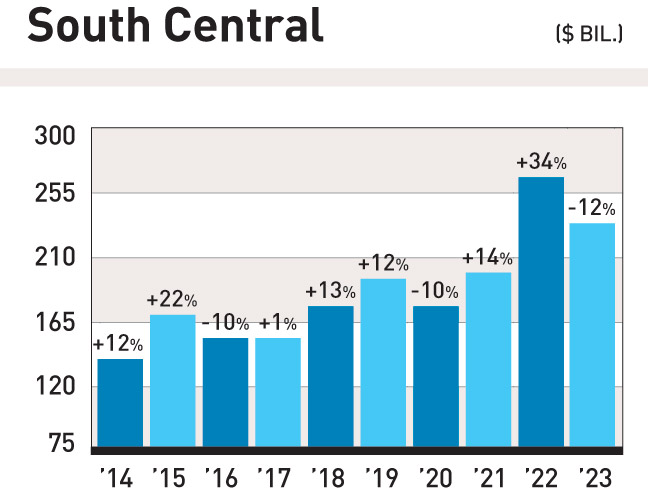 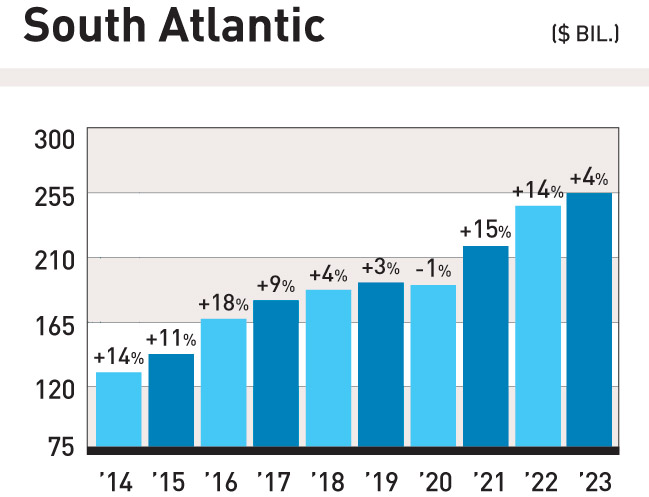 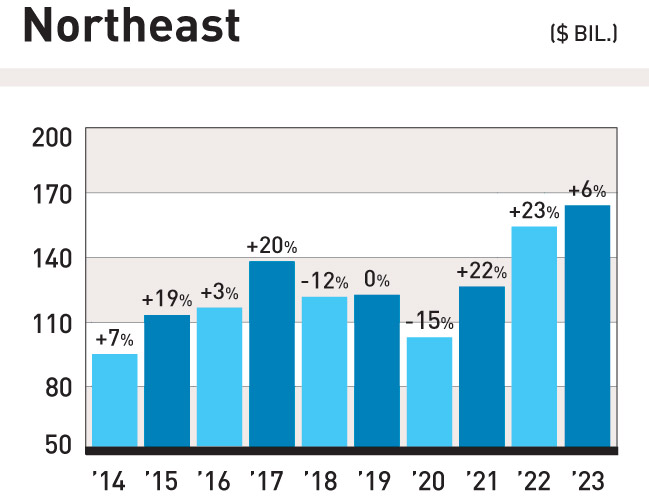 But somewhat more favorable trends are seen for non-residential construction, with starts expected to end 2022 up 40.2%, according to Dodge, before dropping 10% next year. The star of this sector is manufacturing—up a whopping 196% in 2022—due to facilities that were once overseas being brought back to the U.S., and new federal development boosts.

The 2022 CHIPS and Science Act, which provides $52.7 billion for semiconductor research and development, manufacturing and workforce expansion, “was a major step toward reinvigorating domestic chip production and innovation for years to come,” John Neuffer, president of the Semiconductor Industry Association, said in a press release following its enactment. “Semiconductor R&D is essential to innovations powering America’s economy, national security, advanced manufacturing and critical supply chains.” 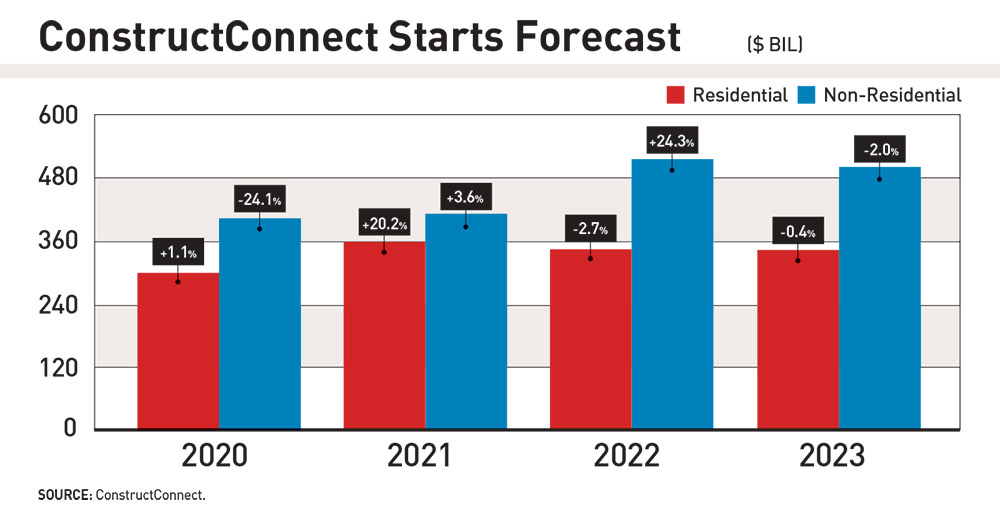 Additionally, the just enacted Inflation Reduction Act, which will allocate $369 billion in funds and tax incentives for green manufacturing and clean energy, will play a large part in the sector increase. While 2023 will see a decline of 42.7% from this year’s peak, according to Dodge, manufacturing sector construction will still be at a “historically high” level of activity, says Branch.

ConstructConnect’s forecast has a similarly strong estimate through the end of 2022, expecting manufacturing to rise 135% from the previous year. “Recent legislation … has also incorporated a strategic bent, with an eye to bringing home jobs from abroad in key industrial sectors, such as computer hardware manufacturing,” says Carrick.

Housing Starts Are Set to Decline, With Demand Weakening 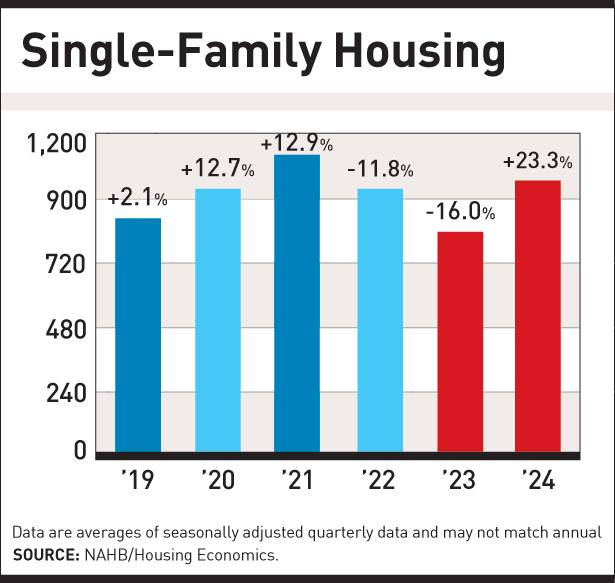 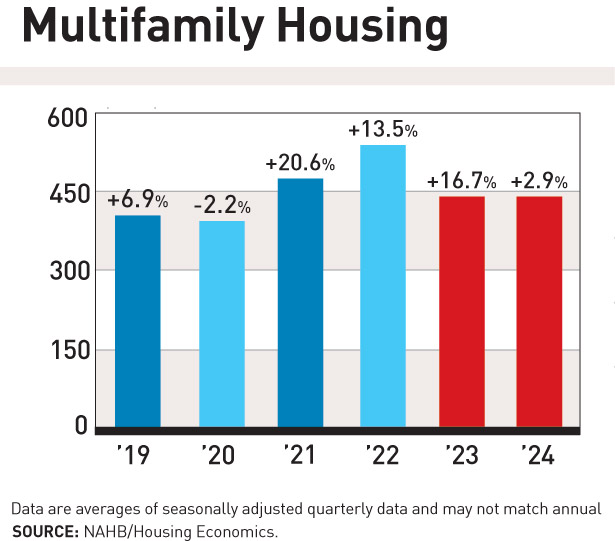 Housing starts will fall 4.3% in 2022, dropping an additional 16.3% in 2023, says the National Association of Home Builders. Single-family homes will fall 11.8% this year and 16% next year. Multi-family residential starts are up 13% in 2022, but are set to drop 16.7% in 2023. “Housing demand is weakening,” says Danushka Nanayakkara-Skillington, its assistant vice president for forecasting and analytics.

Dodge forecasts highway and bridge work to increase 23.1% by the end of 2022, with an additional 20% rise in 2023—due to funds still available from the 2021 Infrastructure Investment and Jobs Act (IIJA).

Only 19% of funding from the landmark $1.2-trillion legislation has been allocated thus far, says Branch, leaving plenty to fund new projects. “We continue to think that 2023 and 2024 are the best years for infrastructure construction.” Still, he says, “if we continue to see appropriation delays,” project momentum will slow for at least a year.

With more than 70% of the U.S. power grid at least 25 years old, and a doubling of transmission capacity needed by 2030 to accommodate growth and connect developing renewable power sources, the Biden administration on Nov. 18 made $13 billion in financing available to states, utilities and others for upgrades, calling it the first down payment on more than $20 billion in infrastructure law funding to support modernization and buildout of long-distance, high voltage transmission and distribution lines. “These federal investments will unlock billions of dollars of state and private sector capital,” the White House said.

Highway and Bridge Work Will See Growth in 2023

The American Road & Transportation Builders Association estimates total spending for highway and bridge construction will increase 13.4% in 2023. “Historically, transportation construction investment is not significantly impacted by short term recessions in the U.S. economy, as most state and local government budgets are already in place,” says Alison Black, senior vice president and chief economist.

Commercial starts, a sector that includes retail, warehouses, hotels and parking, is estimated to rise 24% in 2022, according to the Dodge forecast. Retail continues to rise, which Branch attributes to still unfolding residential growth in the suburbs. Starts in the sector are up 31.1% in 2022, and are expected to increase 4.1% in 2023, Dodge says.

Following a sharp decline during the pandemic, hotel construction starts rose 36.8% in 2022. “Hotels have been benefiting from revenge travel,” Branch says, referring to more trips made by those making up for lost time after lockdowns and stay-at-home orders. But only a modest 2.5% growth is predicted for 2023.

Office construction, another sector deeply affected by the pandemic, also rebounded in 2022. Starts are predicted to increase 22.4% by the end of the year, according to Dodge data. However, this is being driven by demand for data centers as opposed to traditional office buildings, due to the continued prevalence of remote work, Branch notes.

“The demand for office space remains pretty uncertain,” he says. “I don’t think there’s a lot of support [for traditional office construction] in the next couple of years.”

Total institutional starts are expected to rise 22% in 2022, according to Dodge, but will stay flat next year. The education sector, which accounts for roughly half of all institutional work, is predicted to increase 8% in 2022, with an additional 5% boost expected in 2023.

Branch notes that while K-12 school construction has remained relatively flat, lab space is boosting the sector overall, a trend that he expects to continue into next year.

In health care, starts are up 23% in 2022 and are expected to rise 14% in the coming year. “Health care is one of the big opportunities we see in institutional spaces, [as] spread of the residential market has lifted demand for [urgent care clinics], says Branch, similar to the trend seen in retail construction.

In-patient hospital construction is also poised for a strong 2023. “We’ve seen a huge underinvestment in in-patient facilities over the last decade,” Branch points out. In reviewing construction in the planning stage, “we’re seeing a huge uptick in hospital projects, so we’re starting to reverse that trend” in the coming year.

—With Mary B. Powers