With the lingering global recession threat and war in Ukraine driving up energy prices across Europe, there were concerns that the triennial Bauma equipment trade show would be a muted affair this year. But more than 495,000 visitors turned out for the world’s largest equipment event—held in Munich, Germany, Oct. 24 to 30—not only to see the latest machines, but also to take stock of how steady electrification of the construction fleet is changing the industry. 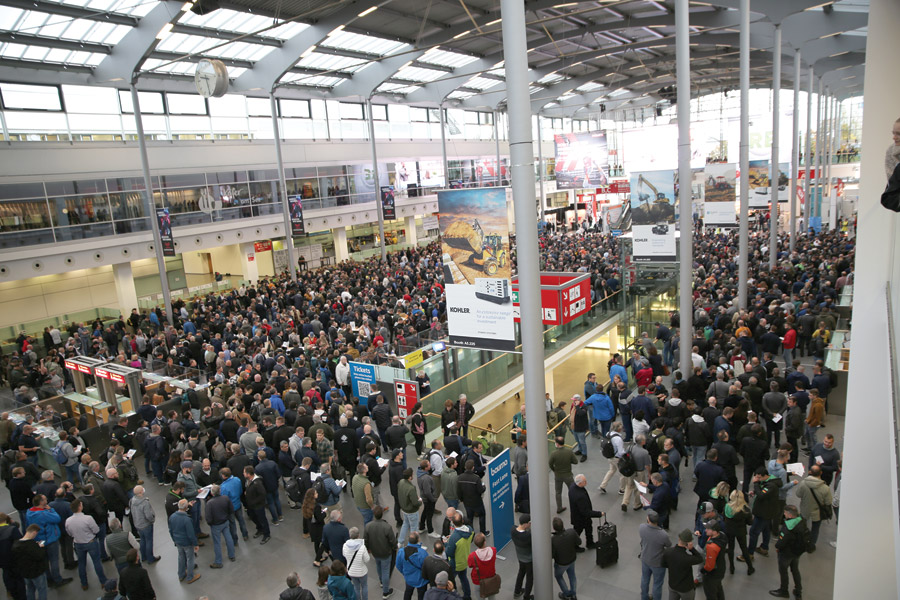 The Bauma exhibition drew hundreds of thousands of attendees from around the world despite travel restrictions.
Photo by Jeff Rubenstone for ENR

If the last Bauma exhibition in 2019 was marked by a swath of prototype-stage battery-powered and alternative-fuel machines, this show was where electrics became a normal part of the fleet.

Major equipment makers such as Caterpillar and Komatsu alongside smaller European manufacturers all had their electric and alternative-fuel machines on hand as regular offerings, reflecting a broader industry trend toward cleaner power. Battery power is now moving into medium-size equipment, no longer limited to just the compact and mini categories.

The firm’s goals are rooted in efficiency, a desire to develop digitally and deliver digital services and in product responsibility, according to spokesman Philipp Hirth. “Part of this is working with alternative drives,” he said. The 9XX H2 excavator is powered by one of two hydrogen engines the manufacturer has been developing since 2020, driven by its Liebherr France arm in Colmar and produced by the engine group in Swiss Fribourg. Based on the generation 8 series of Liebherr excavators, the working prototype is its first to be powered by hydrogen.

Many manufacturers were also eager to tout efforts to reduce the carbon footprint of their operations. France-based Manitou Group, the world’s largest manufacturer of telehandlers, said that it is in the process of reducing its direct emissions by 46% and its indirect emissions by 33.7%. The company also displayed some new battery-powered machines, including the MT625e electric telehandler that is based on its widely used MT625 model and is powered by a 25-kWh lithium-ion battery, upgradable to 55 kWh. In the interest of uptime, the battery on the MT625e can be recharged from 20% to 80% in only two hours. 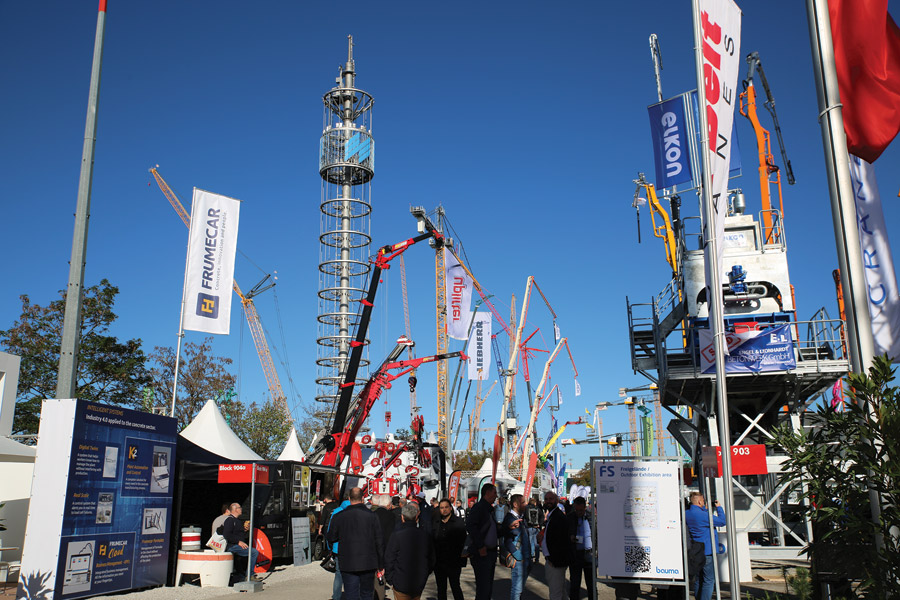 The Bauma exhibition offers a close-up look at construction equipment from around the world.
Photo by Jeff Rubenstone for ENR

While pandemic-related restrictions put a damper on travel plans of many attendees from East Asia, China-based equipment manufacturers still had a large presence. New midsize excavators and wheel loaders from China-based SANY and XCMG drew crowds, while aerial lift and telehandler maker Sinoboom used the show to highlight its growing European manufacturing footprint.

“In the three years since the last [Bauma equipment exhibition] we have been extremely successful in expanding our global network,” said Sinoboom CEO Susan Xu. In addition to adding subsidiaries in Europe, the U.S., Australia, Singapore and South Korea, the firm also began aerial lift production this summer in its new factory in western Poland. While founded only about 15 years ago, Sinoboom has seen rapid expansion from its headquarters in Changsha, according to Xu, and aims to be the world's fourth-largest mobile platform manufacturer by 2025. 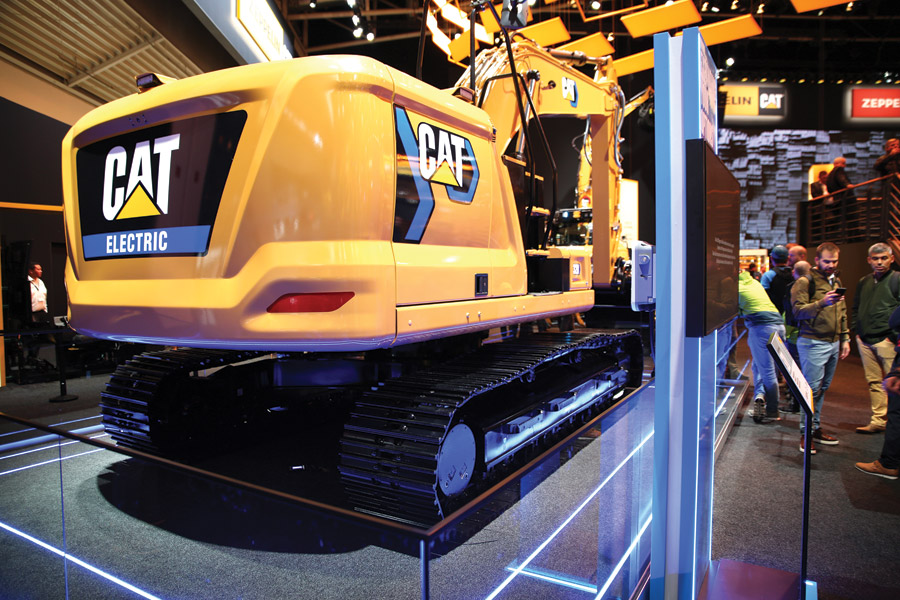 Electric machines were a common sight at the Bauma show, with battery power and alternative fuels that were heavily promoted.
Photo by Jeff Rubenstone for ENR

Battle of the Batteries

Rival industrial machinery and engine makers Yanmar and Kohler each rolled out versions of hybrid diesel-electric combination motors—the introduction to what the former called "electrified power solutions"—in modular formats, with both taking advantage of technologies supplied by recent acquisitions. 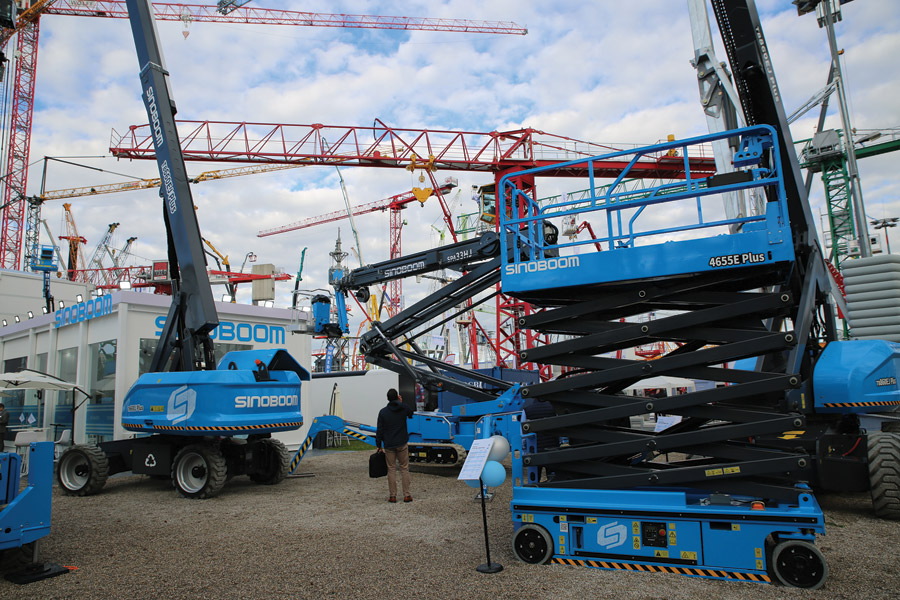 China-based equipment manufacturers displayed their machines despite onerous pandemic travel restrictions to and from the Asian nation.
Photo by Jeff Rubenstone for ENR

The Curtis Instruments component at Bauma was a motor controller bolted to a new Kohler hybrid engine with a 96-V lithium-ion battery. Having the controller enables the engine maker to use any battery supplier to create the hybrid machine as it pursues ‘modularity’—working as a hybrid, mild hybrid or full electric that meets the needs of the original equipment manufacturer. “We see the future as a multi-energy landscape,” Perrone said.

Yanmar’s modular approach is keyed to its recent purchase of Holland-based battery technology company ELEO and its stackable lithium-ion battery packs. The Dutch firm now is building a new production plant on its campus near Eindhoven—the town made famous by Philips, once one of the largest global electronics manufacturers—and is expected to be able to produce 10,000 battery packs a year when the facility is finished.

Yanmar said it sees itself as the “all-in-one systems integrator of e-powertrains” for offroad machines. The ELEO battery modules can be sized up or down depending on specs, important for electrification of offroad powertrains, said that firm's CEO Bas Verkaik. Unlike the current status of electric automobiles, battery and electric systems for specialized off-highway machines, often purpose-built, cannot be stamped out from assembly lines. Verkaik said the concept is that battery modular blades can be customized for size, shape, voltage and energy content so original equipment manufacturers can then dial up what they need and integrate an ELEO battery system into their powertrains.