Effort Launched to Add 1 Million US Tradeswomen in Decade

More than 3,300 women attending the Tradeswomen Build Nations conference in Las Vegas in late October cheered in hearing that the event was the world’s largest-ever gathering of women construction workers.

They cheered louder when union, management and government speakers said now is the time to grow even larger.

“Together, we’re going to ... bring more women into the trades than ever before,” said U.S. Commerce Secretary Gina Raimondo, who announced  creation of the Million Women in Construction initiative to recruit 1 million more women into construction over the next decade, nearly double the current number.

"My focus is building the long-term competitiveness of the U.S.," she said. "But here’s the reality: if we don’t invest in women’s success in the economy, we’re not going to be able to compete."

No specifics on the effort were released, but Raimondo vowed to leverage federal infrastructure spending to increase opportunities for women. “Don’t you think that if contractors and companies are using taxpayer money, they should do it with an inclusive workforce,” she said, noting that her agency leads deployment of $100 billion of funding from the CHIPS and Science Act to boost domestic semiconductor manufacturing and from the Bipartisan Infrastructure Law to expand high-speed internet.

"We're going to create up to 200,000 construction jobs with that money, good jobs laying fiber and building fabs that have the potential to change lives, offer family-sustaining benefits and lead to long-term career pathways." Raimondo said. "Everyone should have access to these jobs, and that means women and people of color too."

She added: "There's no way the Department of Commerce is investing billions of taxpayer dollars in brand new infrastructure projects and not having those jobs go to people who look like all of America."

That women make up "less than 2 to 3 percent" in some trades, said Raimondo, "isn’t right and isn’t sustainable. It’s time for a change."

A former Rhode Island governor, she noted creation of a welding training program for women to support the need of Connecticut-based submarine manufacturer General Dynamics Electric Boat to hire 500 welders a year. According to Raimondo, "the women who’ve come through those programs are some of the hardest working, most detail-oriented workers [the company said] they’ve ever had. It’s clear women in the trades know how to get the job done."

NABTU President Sean McGarvey said the construction spending approved in legislation such as the infrastructure bill, the CHIPS Act and the Inflation Reduction Act is “a game-changer for us,” noting the "nearly $4 trillion of U.S. government investment that will be leveraged over the next 10 to 15 years.”

Renewable power project developer Ørsted supports that inclusivity as the clean energy transition demands more workers and new skills, said Allison Ziogas, its U.S. labor relations manager and a former union electrician forewoman. “There are plenty of studies that will tell you how much diversity improves the business case, but it's not enough to just make the business case,” she said. “It is about addressing systemic barriers that women and people of color have faced.” 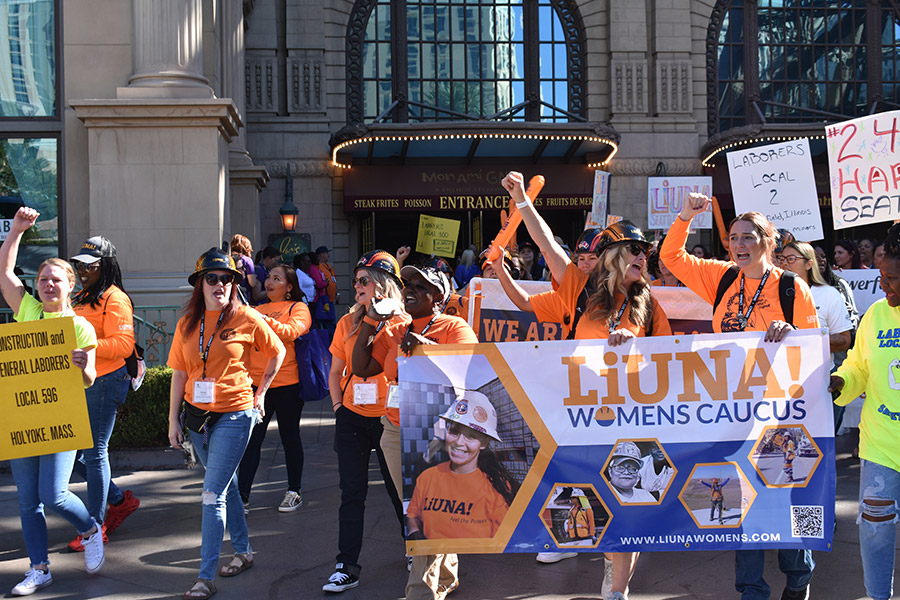 With years of infrastructure projects ahead, “You're going to have work for a very long time; you're going to have a career out of this,” said Vicki O'Leary, Ironworkers' union general organizer for diversity. "You're looking at middle class wages and improving your ability to help your family.”

She encouraged attendees to reach out to other women about industry opportunities, noting that too many “are not aware that this is a job that they can do,” boosted by apprenticeship training.

It was important the conference was live so tradeswomen can realize the strength of their numbers, with attendees from across the U.S. and Canada, O'Leary said. “It's invigorating to go home and feel so energized.”

The plumbers' and pipefitters' union, also called the UA, noted a new union-wide incentive for women with adoption of a maternity benefit, effective Nov. 1, which will provide short-term disability payments for six weeks to a member in good standing who gives birth to a child on or after that date. The benefit will be funded by the union's general assets and administered by its national office, the UA said. A spokesman said the benefit will be in addition to any that may be provided by a union local.

“You are not only essential workers, you are role models in a national trade-building program,” he said. “Use your voice, share knowledge, stand up, proudly kick down doors, and break glass ceilings for the next generation.”