Racing the Clock to Restore the Roadway

When floodwaters washed away a critical portion of Interstate 10 in the Southern California desert recently, Caltrans and its contractors moved fast to restore traffic

In late August, a series of storms barreled across Southern California dropping torrents of rain on the high desert. A few inches of rain fell in the course of an hour, collected on barren slopes and rushed down previously parched arroyos. Near Desert Center in eastern Riverside County, this sudden rush of water overwhelmed the eastbound lanes of Interstate 10, washing them away and cutting the main highway link between Los Angeles and Phoenix.

A value-engineered bid and the contractor’s willingness to take on risk in the case of unexpected weather events paid off in the wake of the Aug. 25 flash flood. Borrowing materials from other jobs and summoning crews back on site overnight, Fisher Industries was able to have the eastbound lanes back in operation within 52 hours.

The contractor won late last year the approximately $280-million job to reconstruct a 30-mile stretch of I-10 and offered the California Dept. of Transportation a value-engineered proposal to detour all traffic to the median, saving $19 million, says Divyesh Vora, Caltrans District 8 area manager. “What happened was that the temporary detour [culvert] got washed out.”

California Highway Patrol initially shut down all interstate traffic, but the westbound lanes, which had no significant damage, were reopened within hours. Caltrans established a one-lane detour for the eastbound lanes onto the frontage road bridge to restore traffic in that direction although major backups ensued.

Vora notes that the flash flood also shut down I-77 and a county road bypass, making the quick reopening of I-10 even more crucial.

Fisher project manager Josh Alves says crews that had gone home for the day were recalled to the site that evening. “We got with our suppliers … we made an emergency call to our concrete batch plant [in Arizona] to get it going. Eight pieces of equipment were delivered within six hours,” he says.

Working in 12-hour shifts, crews excavated some 20,000 cu yd each at three locations and used some 3,000 tons of aggregate base and backfill, placing some 1,500 cu yd of concrete and grout through Sept. 9 and using 400 tons of asphalt to patch the road up, Alves says.

They placed 16-ft by 9-ft concrete culverts, 66-in.-dia concrete pipe and 72-in.-dia metal pipe. “We have a hotel project in Glendale, and we used culverts from that,” he adds. The crews utilized a 110-ton lattice boom crane to set the approximately 40-ton boxes.

According to meteorologist Tom Frieders, the flash flood was the result of location and timing. He described the event as a “perfect scenario” for what occurred.

“Because the way the mountains are situated to the south, any runoff heads right toward the interstate,” he says. “If it had been 10 miles north, it would have had no impact.” 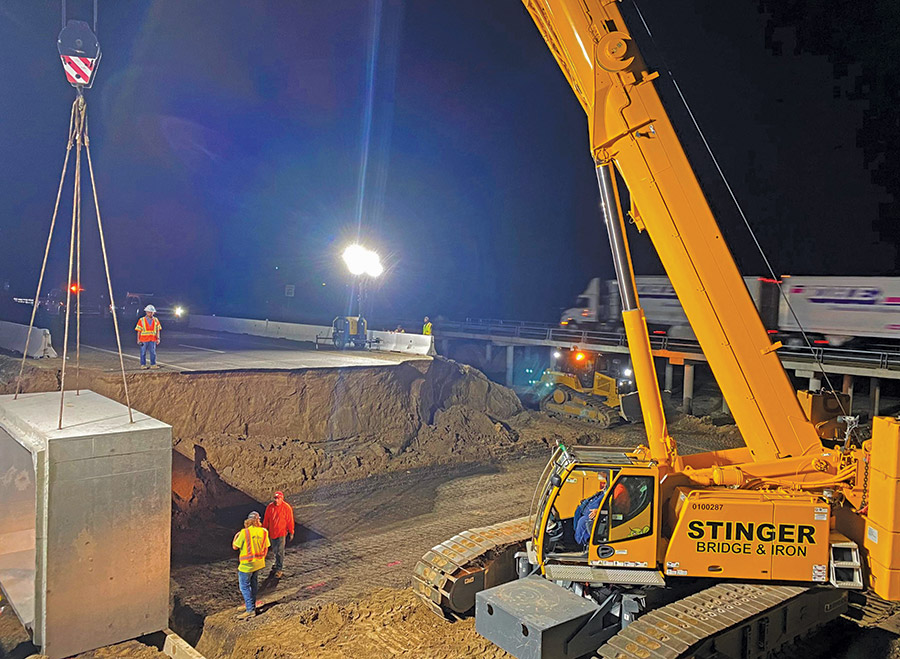 In less than 48 hours, crews placed 3,000 tons of aggregate and backfill and laid 400 tons of asphalt to patch the road.
Photo courtesy Caltrans

Another contractor placed almost 50 cu yd of slurry and concrete to fortify an Interstate 15 bridge in Riverside County that received “significant” damage with much of its riprap washed away and one column with scouring at its abutment, says Xavier A. Quintanar, area construction manager for Caltrans District 8.

The 212-ft-long, nine-span continuous reinforced concrete Wheaton Wash Bridge had been widened in 2017 by over 10 ft, says Quintanar. The 1,000-year storm exposed all the piles at one bent and washed away a column.

Las Vegas Paving, which was working on another road project in Primm, Nev., began work under a $3.7-million emergency contract. “We lucked out,” says Quintanar. “It’s such a remote area.” The contractor used K-rail for formwork of temporary shoring instead of lumber to save time. Vehicles weighing more than 82,000 lb were rerouted.

Crews reopened all lanes on Sept. 1. Caltrans is now working on a permanent fix for the bridge, with a preliminary design expected next month, says Quintanar.

Preparing for the Future

The Interstate 10 washout may have been an isolated incident, but weather-related impacts to transportation infrastructure are a growing problem in California. Within a week of the event, heavy rains in the San Bernardino National Forest led to mudslides that washed over key roads.

According to the Director’s Order for Fiscal Year 2022-2023, the total cost for storm damage repair is more than $53 million, which includes $40 million for contracts, $1 million for right-of-way and $12 million for support.

With all that on the line, Caltrans spokesman William Arnold says the agency is preparing for future heavy rainfalls.

“Long before the first drops fall on a roadway, Caltrans has already taken actions throughout the department and with its partner agencies at the local, state and federal levels,” he told ENR in an email. “As potential risks to the state’s transportation network are identified, Caltrans begins to coordinate preparation and response activities to prepare for and respond to any emergent needs.”

Those actions follow a 2017 assessment examining the possible impacts of climate change to the state’s roadway infrastructure. The Climate Change Vulnerability Assessments report “provided the initial data and analysis needed to understand the risk of climate impacts on the state highway system,” Arnold adds. “Caltrans has used these data to develop long-range planning documents and to identify key corridors and assets to prioritize areas for adaptation funding.”

In 2019, the department created the Office of Vegetation and Wildfire Management to research and develop preparedness and responses to severe weather events. It formed the Burn Area Emergency Response Team and the Watershed Emergency Response Team, which coordinate with partner agencies to assess burn scar areas and other locations that are vulnerable to severe weather and precipitation.