With Exchange, LIFTbuild Delivers First US Top-Down Project Since the '70s

Top-down construction—assembling the floor of a building on the ground and lifting it into place—has long presented a possible alternative to the labor-intensive process of constructing steel frames, floors, walls and all components at height. But what happens when that process is combined with a prefabrication strategy that aims to take manufacturing best practices and apply them to construction?

That question is being answered with Exchange, a 207-ft-tall condo and apartment tower in Detroit’s Greektown neighborhood. The 16-story project would be difficult, at best, to construct on its triangular, three-quarter-acre site, and not just because it is bordered by busy city streets and businesses on all sides. Detroit’s elevated People Mover system alongside the site also constrains any potential tower crane usage.

“[The People Mover] is literally right at the edge of the site,” says Mark Tamaro, managing principal of Thornton Tomasetti, the structural engineer for Exchange. “One of the appealing aspects of [the top-down approach] is that all of the meaningful loads of the building are centered on its cores. You’ve got a very tight site constrained by a neighbor’s activities that have sensitivity. LIFTbuild gives you the ability to stay as close to one edge and as far away from the other as possible.”

The $64.6-million project is a proof of concept for LIFTbuild, the wholly owned subsidiary of Detroit-area contractor Barton Malow, which is acting as both general contractor and development partner. LIFTbuild amassed 15 different patents for both top-down construction and manufacturing-in-construction processes over four years of research and development before the 166,000-sq-ft Exchange broke ground in September 2021.

Until now, no project like it has been assembled above ground in the U.S.

The structure is supported by two concrete cores that LIFTbuild Chief Operating Officer Joe Benvenuto calls “spines,” which were erected conventionally. The core walls are 10-12 in.-thick and house the stairwells and elevators. Every steel-framed floor deck of the high-rise is built on the ground using more than 75 tons of steel and 110 cu yds of concrete.

When each of the 500-ton, 11,000-sq-ft floorplates are ready to be lifted, they’re raised by eight strand jacks, with a capacity of about 200 tons apiece, staged on the ground with pulley systems at the top. The floor segments rise at a speed of about 20 ft to 30 ft per hour, connected to the strand jacks by a proprietary steel-frame rigging system built by Engineered Rigging that can be reused for subsequent floors. The floors are connected to the cores with a proprietary bolted connection once fully elevated.

“This is the third version of how we lock the floors into the core, and it’s gotten easier and faster and better each time,” says Tamaro, who also was the structural engineer on top-down projects in India. “It’s getting better because we have the contractor’s input each time to see what works and what’s a challenge.”

Lifting a completed floor takes about 10 hours. Work on the next floor can begin before the previous one is fully in place thanks to built-in safety measures.
Photos courtesy of Barton Malow

As one floor is raised, work can safely begin on a new floor below it due to safety measures and redundancies built into the strand jacks. The first two floors, where a retail tenant and the building’s lobby and fitness center will be located, will be built traditionally as a podium once the lifting is completed, but all of the other floors will be lifted.

To date, eight floors have been built on the ground and raised to the top of the structure. No trusses or other structures on the roof support the floors; they’re entirely held up by the building’s cores. It took about 10 hours to raise and lock the highest floor, before permanent structural connections were made to the spines. The roof, with membrane and mechanical equipment, was also lifted by the strand jacks from Engineered Rigging and the LIFTbuild rigging system.

"It's a fully cantilevered design and there are no columns in the way of the exterior glazing, so if we go up to the floors, you will see a wide-open floor space, which is great for the residents but also great for the workers assembling it,” Benvenuto says.

Benvenuto said all steel framing has been modeled to a high fabrication level in Revit, and assemblies of everything from wall panels to MEP racks are pre-measured and labeled. “Nothing is measured with tapes on site,” he said.

LIFTbuild has worked with its suppliers to create unitized assemblies for everything from the building’s walls to its MEP systems, which can be installed upon arrival. It also has a warehouse in southwest Detroit where much of the materials are stored before they’re sent to the site just in time. Benvenuto says all the processes LIFTbuild and its alliance contractors—subcontractors who joined the project early on in development—are completing on the ground would come with a higher degree of risk if built traditionally at height. Using LIFTbuild’s strand-jack system, they can also temporarily raise a floor 6-8 ft to install mechanical, electrical and plumbing systems at a comfortable working height.

“We constantly communicate and talk to our subcontractors about why this is the right height for us for access, installing work, or for moving around the site,” Benvenuto says. “We can do that at any elevation. It’s all about the efficiency of the worker.” 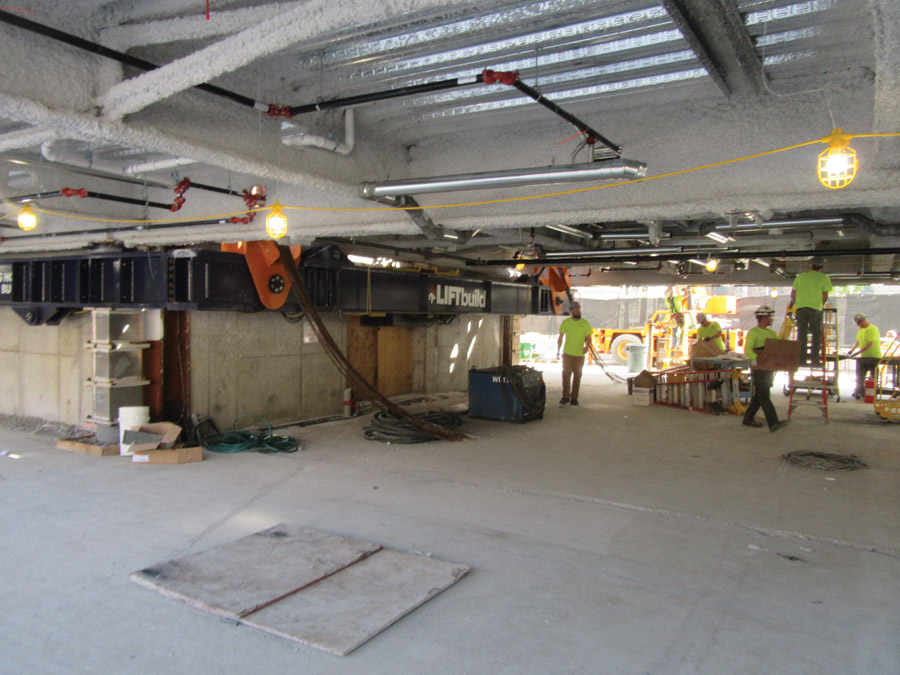 MEP piping, ductwork and electrical lines are installed on the ground while the LIFTbuild system has safely jacked a floor 8 ft above the ground. Nothing more than a step ladder is needed to reach underfloor spaces.
Photo by Jeff Yoders/ENR

Fire protection, piping supply, ductwork and the top track for the interior walls are installed at this ground-level stage rather than at height. Small crews then take the stairs up to the most recently raised floor and connect the walls to the slabs at height and install the few systems that could not be installed from the ground. The savings over traditional methods don’t just come from labor, however. Building Exchange in this way means using less concrete and steel as well.

The unusual staging and schedule meant LIFTbuild had to bring subcontractors into the project during the design phase. “The exterior envelope contractor [CGI] were on board from the very beginning [of the design],” says Daniel Harding, senior project architect at designer Ghafari Associates.

“The exterior envelope is a design-build system. Some of the other team members were added in as the design process went along. After the MEP folks joined the process, some of the innovative things that we’ve done such as prepackaging the wall panels became part of the plan from just looking at all of the different ways we could get them done—certainly a logistical challenge that Barton Malow has taken on.” 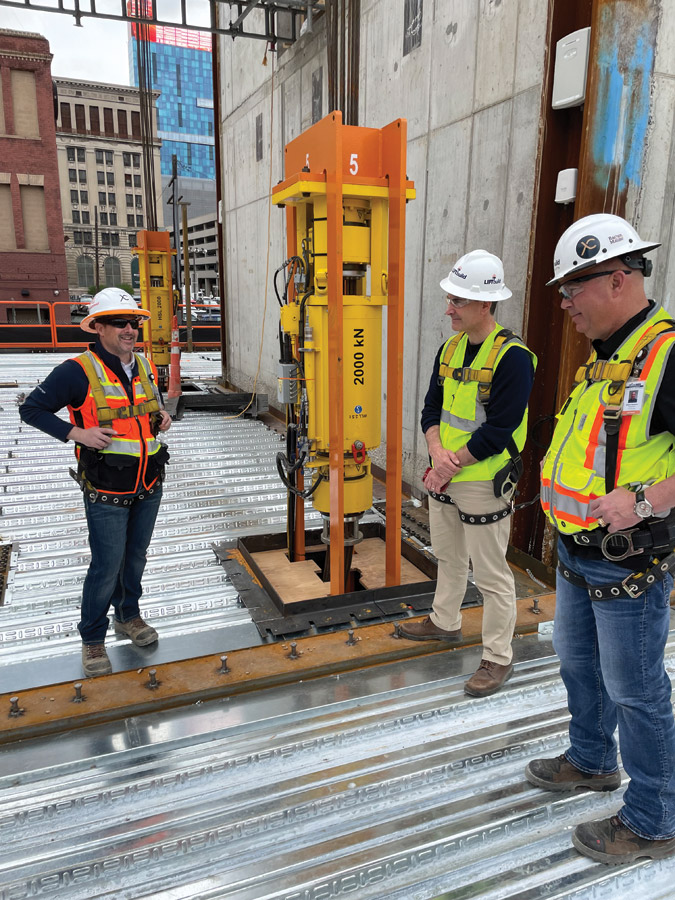 In a conventionally delivered building, a panelized metal building envelope would be installed by workers tying in on the edge of the floor plate, installing first insulation and then a rain screen. A metal panel cladding would be installed on the outside by crews wearing safety harnesses, with a crane bringing materials up to height. Curtainwall panels could be dropped or damaged when wind becomes a factor in installing them.

“Here, it’s coming unitized and prefabricated in one already completed piece,” Benvenuto says. “But it’s still a conventionally tested joint that has been engineered and somewhat modified to just accommodate our system and methodologies. We try to use the connections and other aspects of conventional construction that have been tested and relied on and not have a bunch of one-off systems.”

Strand jacks work by locking and pulling cable strands upward using a hydraulic cylinder. They are commonly used in heavy and civil construction. The strand jacks work in tandem with a steel-frame bridle to lift floors.
Illustration courtesy of Barton Malow/LIFTbuild

Benvenuto says that mass customization is within LIFTbuild and its suppliers’ capabilities, and standardization is the priority. They would like to use as many off-the-shelf building components as possible to make the system attractive to other developers. “It’s an objective of ours,” he says.

All sprinkler system heads are flexible and drop into place with the ceiling when it’s placed into the floor above, thanks to fire protection subcontractor and alliance partner Progressive. Electrical wiring was installed by a similar method by Shaw Electric, which was also involved early in design as an alliance partner. Likewise, HVAC ductwork and mechanical systems were designed and installed to fit in before floors are raised by alliance partner Sylvan.

Barton Malow self-performed all concrete and steel work on the ground, assembling them as unitized systems. Benvenuto said a 9-10-day working cycle is needed to complete a typical floor before it’s lifted into place and Barton Malow’s interior self-perform team takes over. 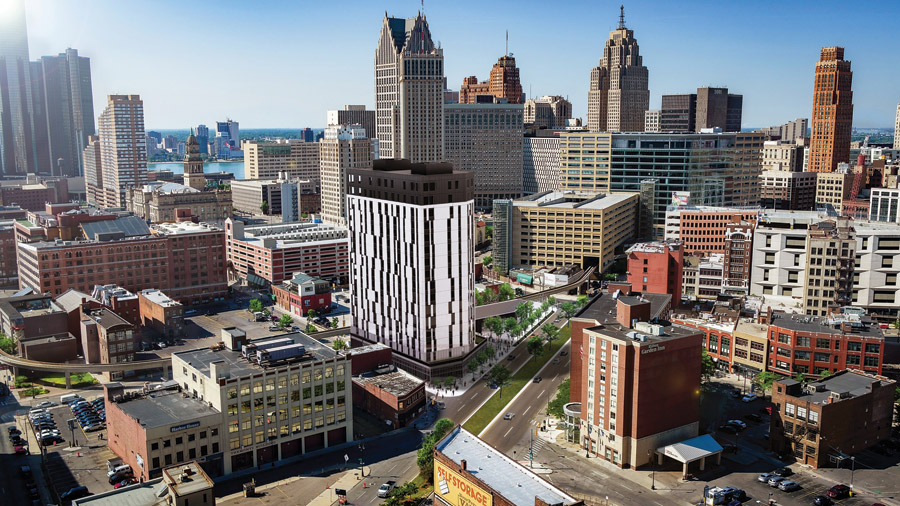 The Exchange tower will be completed in spring 2023.
Rendering courtesy of Barton Malow/LIFTbuild

Barton Malow is invested in the Exchange project, which will have 153 residential apartments and 12 condominium units when complete. Benvenuto said he hopes that it will be a true demonstration project that attracts other developers to the LIFTbuild system, even those working on other types of buildings. One of the minority investors, a well-known Detroit developer, said that the building system was fully explained and all were on board with using it and being part of the proof of concept.

“When you move all this labor down to the ground, the more sophisticated the MEP systems are, it’s actually better,” Benvenuto says. “This is a residential building. So while we’re saving labor, because it’s done at ground it’s not very intricate and complex. Put this in a health care facility where you have complex MEP systems, multitrade racks, [you’re now] installing that six feet off the ground, not up in the air. That’s where I think we really begin to gain momentum on labor savings and efficiency of our trades.”

The number of workers on site at Exchange averages around 50.