Recession fears, inflation and other issues plaguing the economy in the first half of 2022 have persisted through the third quarter. While most construction sectors have been successful throughout this year, questions regarding what’s to come in 2023 loom large as we head toward the end of the year.

“The construction sector has turned into a tale of two worlds. First, the nonresidential sector has been a solid performer as manufacturing, public works and data center construction have flourished. Conversely, single-family construction has continued to trend sharply lower as rising mortgage rates have led to worsening affordability,” says Richard Branch, chief economist at Dodge Construction Network. “The question, though, is how the entire construction sector will react to still higher interest rates over the coming quarters as the Federal Reserve continues its inflation battle with aggressive rate hikes?”

Branch continues to predict no recession for 2023, but says the risk is rising. Should one occur, non-residential starts could decline by 16%, according to the Dodge forecast. 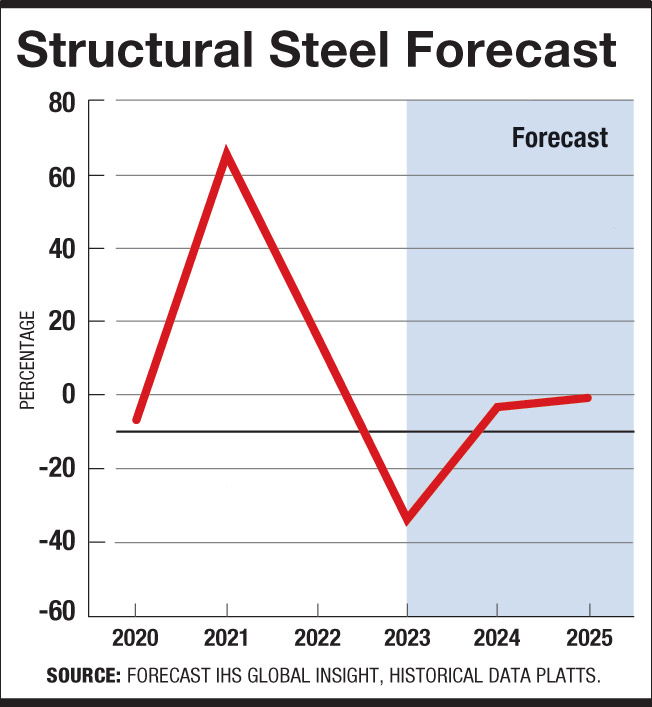 Through the first eight months of 2022, overall construction starts were 16% higher than the same period in 2021. The residential sector is “treading water,” says Branch. Single-family starts declined 8%, while multifamily construction is up 28% from the same time last year. Notable multifamily projects to begin construction in the third quarter were the $700-million Aria Reserve in Miami and the $680-million first phase of One Journal Square in Jersey City, N.J.

“Nonbuilding starts are finally starting to see some forward momentum following a moribund start to the year as infrastructure dollars start to flow into the market,” says Branch. “Utility activity has been robust, but street, bridge and environmental starts have also been strong.” Starts increased 21% in 2022’s first eight months compared to 2021. The biggest nonbuilding projects to start work in the third quarter were the $9.4-billion first phase of the Driftwood LNG Export Terminal in Calcasieu, La., and the $7-billion third stage of the Cheniere Corpus Christi LNG Terminal in Gregory, Texas.

Lumber prices are “a lot less volatile compared to last year, and will generally follow a downward trajectory for the remainder of the year,” says Deni Koenhemsi, associate director, market intelligence, at S&P Global. “The slowing demand environment and ample supply [relative to 2020 or 2019] will shift negotiation power to buyers, a welcome change after two years of pandemic-driven price increases.”

The S&P Global third-quarter forecast for softwood lumber is virtually unchanged from the second-quarter forecast, expected to fall 4.1% in 2022 and drop another 28% in the next year. Plywood prices are predicted to fall 1.1% this year, with an additional drop of 25.4% in 2023.

Prices for steel are also expected to decline, but at a slower rate than S&P Global predicted in the last quarter. “Bar, rod, and structural steel prices will trend lower for the rest of 2022 throughout most of the world as the tepid reopening of mainland China is overshadowed by global economic weakness,” says Christos Rigoutsos, senior economist, market intelligence, at S&P Global.

He adds: “U.S. prices will keep trending lower throughout summer, following falls in scrap prices. Unlike Europe and Asia, however, demand still appears to be strong despite this trend, leading to higher price floors.”

Prices for reinforcing bars are predicted to increase at a rate of 10.6% in 2022, according to S&P Global’s third-quarter forecast. That represents a sharp drop from the second quarter’s forecast of a 20% increase for this year. For 2023, prices are expected to fall by 22.6%, another major contrast to last quarter’s prediction of an 8.8% decline.

“The projects funded by the Infrastructure Investment and Jobs Act (IIJA) are required to use steel that has been melted, poured and rolled in the U.S., thus maintaining demand at healthy levels,” says Rigoutsos. “Moreover, supply for long products will be somewhat constrained until 2024, when several new capacity additions are expected to come online.”