The 700-ft-long extension with a 133-ft spur is 60 ft underneath the airport’s domestic baggage claim station. It will increase the Plane Train’s efficiency by as much as 20%.

For Gabrielle Ferro, project manager with the Clark Construction/Atkinson Construction/Technique Concrete Construction joint venture that’s leading the project, the main challenge has been keeping everyone on the same page: the airport, contractors, engineers, the Metropolitan Atlanta Rapid Transit Authority (MARTA), SkyTrain and more, each of which had to be notified of blasting times and any subsequent changes to that schedule. 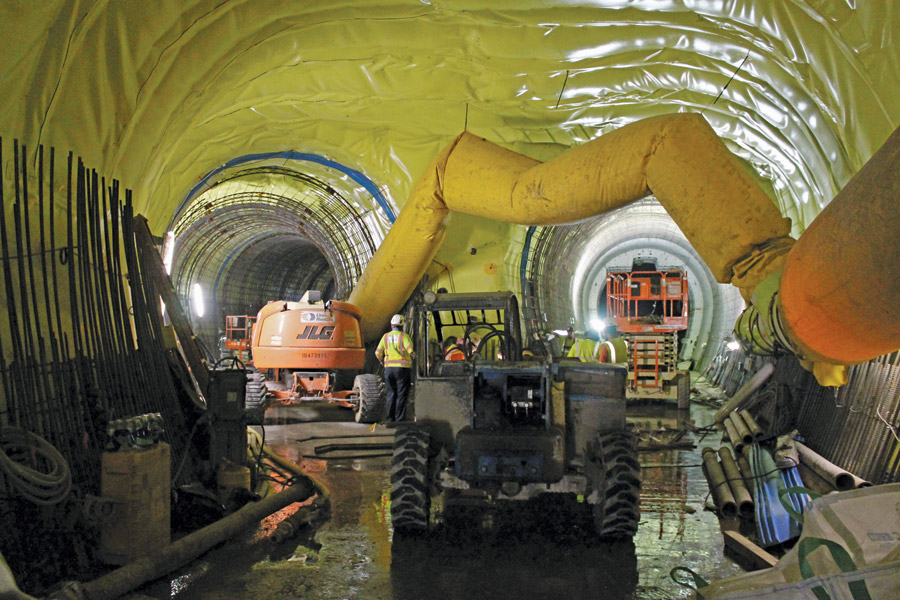 With a minimum 6 ft of rock cover over the tunnel’s bifurcation, designers went with a flat roof instead of an arch, with wire mesh and thicker linings for support.
Photo by Derek Lacey for ENR

A quarter million people ride the Plane Train each day between nightly blasts that detonated a total 45,000 lb of dynamite for the tunnel’s excavation, and everything about the job, from materials deliveries to active excavation, was coordinated to not impact the airport’s 100 million annual passengers who will move through the airport even faster when the tunnel extension is online.

Once it reaches the end of the current tunnel, the Plane Train backs up on the north track and goes through a switch between baggage claim and Concourse T to get on the south track and head east toward the gates, Ferro explains.

When complete, trains will continue forward past baggage claim and turn around there instead, meaning trains will always be in motion, Ferro says, as opposed to a train at Concourse T having to wait for another train to go through the switch and clear the track. The change will improve that turnaround time by about 9 seconds, set to increase the 10,000 passengers every hour at peak times to 12,000 per hour at peak hours, and from 254,000 every day to 304,000. 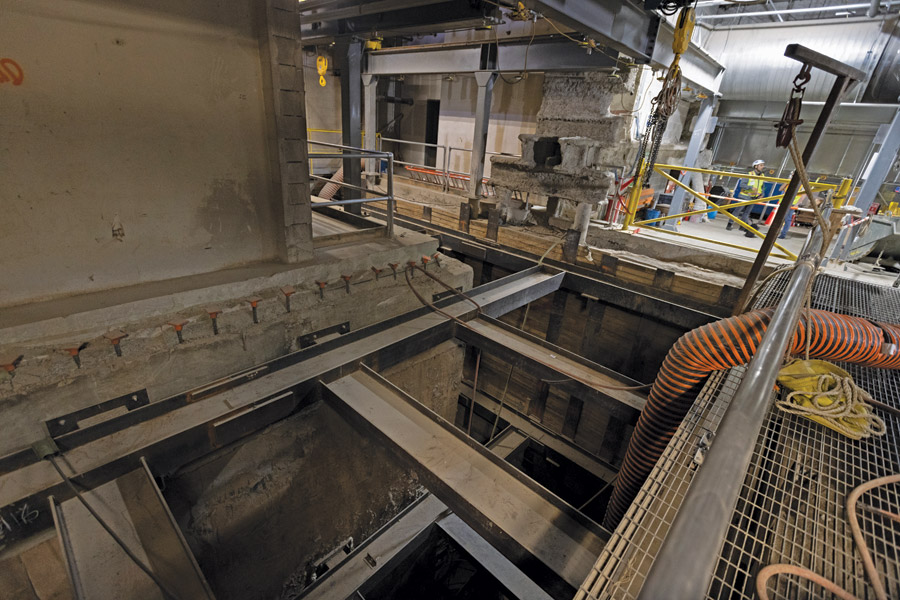 In addition to the tunnel, crews are making upgrades inside the terminal, like a new elevator shaft and escalator.
Photo courtesy Brian Crumb

Shaft work on the tunnel extension began in May 2020, with horizontal tunnel excavation starting in October 2020 and wrapping up in January. Horizontal tunnel work is set for a June 2023 completion with substantial completion of the entire $331-million progressive design-build job planned for May 2024, according to the airport.

Tom Nissalke, assistant general manager for the airport, says the project is being funded by both airport revenue and airline contributions.

For more than a year of tunnel excavation, the engineer, contractor and sometimes an owner’s representative would meet for a required excavation support meeting at 7 a.m. at the tunnel face, examining the conditions and deciding on that day’s length of excavation and required support type. Crews gained 3 to 6 ft every night, and followed up with shotcrete every morning.

“Every day we were talking about, ‘Do we place a girder? Do we need to install some rock bolts?’” Ferro says.

All blast design adjustments were made during the day based on instrumentation readings from the night before, says Lee Hill, superintendent with Atkinson. That blasting happened in a two-to-four-hour window at night to minimize impacts to airport operations above.

From start to finish, everything about the project is tailored so millions of people overhead don’t know any construction work is going on beneath their feet.

“Keeping a very tight control on our vibrations was paramount,” Ferro says. “The instrumentation is a 24/7 monitoring. We set it up before we did anything with even the access shaft, and we still have our instrumentation going today. And we look at it every single day.”

Prisms mounted on to the terminal slab monitor movement 24/7, she says, as well as ground monitoring inside and outside the terminal and inclinometers to catch any shifting ground.

“That really is critical on these SEM tunnel jobs,” says John Murray, engineer with McMillen Jacobs Associates, the engineer of record, noting that sometimes the instruments would get unplugged or blocked by equipment.

Inside the terminal, Ferro says the final condition will include four escalators, a glass security wall on the way from Austria, new fire shutter, security breach gate, all new finishes and a TV screen connected to a camera overlooking the escalators.

The first escalator truss section was flown in Aug. 16, lifted in place via a hoist beam crews installed. All that work, too, as well as all material deliveries, are done between 10 p.m. and 6 a.m. to minimize the impact of closing the area to passengers.

Once Atkinson finishes the tunnel work, including its lining, beams for the train to run on and a walkway, it will be turned over to the owner, the City of Atlanta Dept. of Aviation, and then to Alstom, the company that runs the Plane Train, Ferro says. Alstom will do the rest of the fit-out required to make the tunnel operational.

“I’ve always loved airports since I was a kid,” she says. “So being able to see just how much coordination—there are a lot of really cool things behind the scenes.” 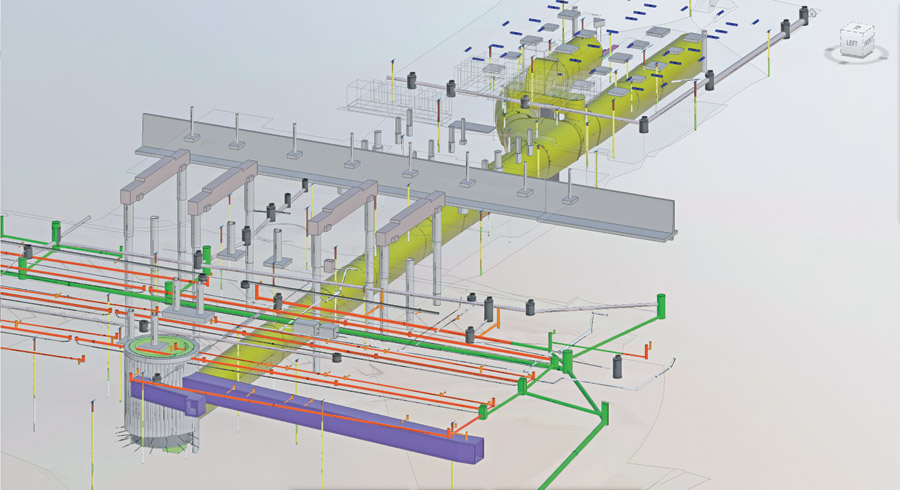 The tunnel extension had to navigate multiple nearby foundations, including for the airport’s SkyTrain, and MARTA.
Image courtesy McMillen Jacobs Associates

It’s point A to point B at a certain elevation, and that was the challenge, Murray says. Twenty or 30 ft deeper and it would’ve been a very easy project.

“This is the profile we have to build and here’s what it means: low cover, mixed face conditions and big foundations above us in the soil,” he says.

Design was completed in stages, Murray says. First, the shaft design, packages for instrumentation and monitoring and underpinning work were done as early design packages to get construction started, he says, and once it was underway, work continued on designs for the rest of the tunnel.

“Sequencing all of that work was also very complex,” Murray says. “It’s a short tunnel … but it has all the complexities of a really big tunnel project.”

The tunnel crosses about 23 ft from foundations for the airport’s SkyTrain, which carries passengers from the baggage claim area to the Gateway Center and Rental Car Center underneath the MARTA station and around 5 or 6 ft from its elevator and the hydraulic piston that powers it.

“It’s a very congested area,” Murray says. “There’s an elevator right between two tunnels. On the south wall of the elevator, you can see the north wall of the south tunnel.”

Beyond that, the tunnel moves underneath the terminal building foundations and splits into two sections.

Contractors used a micro-pile system to shore up the terminal foundations, relocating hot and chilled water lines, power conduits, fiber conduits, fire alarm conduits, fire sprinkler lines and more, which also had to be relocated away from where the new elevator shaft is planned, Ferro says.

The 9-5/8-in.-dia piles were driven an average of 44 ft deep on either side of the columns and bridge beams were installed to essentially create a bridge with two columns that the tunnel mines underneath, she says. The bridge beams were welded to the existing steel columns for the terminal, transferring the load from shallow footers to deeper, competent rock.

After the tunnel work is completed, the load will be transferred back to the shallow footers and the micro-piles will be cut and the slab replaced to return the terminal building to its original state.

Hill says the short length of the tunnel also created some challenges in giving trains enough room to turn. Normally, a curve with a large enough radius would accommodate the turn, but in this case, the diameter of the tunnel changes three times to make a portion of the tunnel large enough to fit the train through the curve.

At that spot, the bifurcation where the tunnel splits into two, Murray says, the tunnel is 50 ft wide and 27 ft high with 12 ft of cover total and a minimum 6 ft of rock cover.

“We ended up designing a very flat roof for the bifurcation,” he says. “If we did a traditional arch, we’d be taking away from the rock cover.”

Normally, he says, they wouldn’t design that flat roof, and if there was 15 ft of rock cover or so, they would have designed an arch. In this case, wire mesh was added in the crown to handle the tension, and a thicker shotcrete lining and thicker final lining were applied. 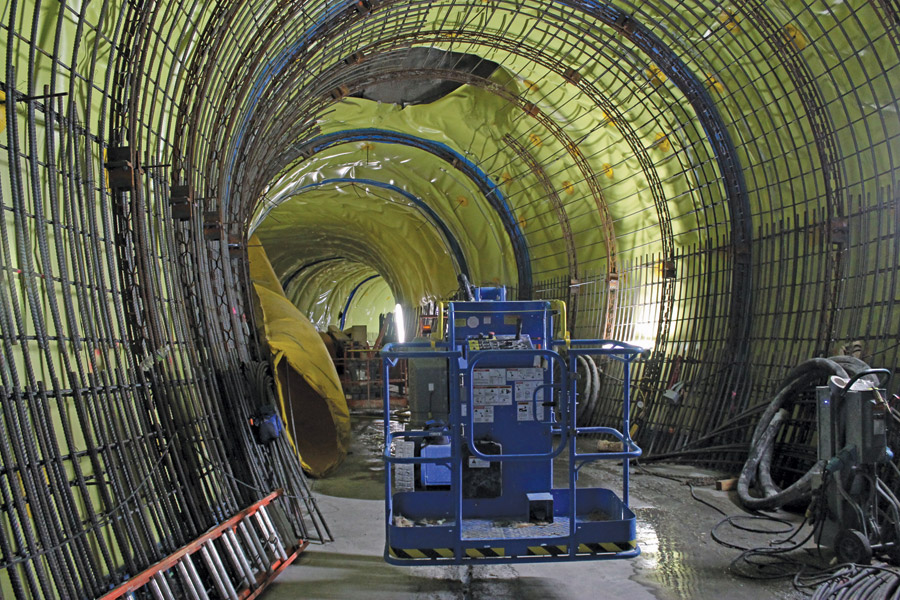 Excavations progressed 3 to 6 ft each night as work was planned to minimize the impact on the airport above.
Photo by Derek Lacey for ENR

Paving the way with PDB

For Murray, the progressive design-build model has been key to the project’s success.

“It was a really exciting, complex project,” he says. “I feel like we had some very big challenges that we dealt with successfully.”

It’s particularly advantageous in a project that has such a high level of coordination among stakeholders, he says, and with all the complexity of working in an airport. It allows subcontractors to really work with the owner and price appropriately so there aren’t arguments later.

“It was a really exciting, complex project. I feel like we had some very big challenges that we dealt with successfully.”
—John Murray, Principal, McMillen Jacobs Associates

Pricing work based on the ongoing design meant they could figure out challenges as they came and what work was going to be required, Murray says, as well as shutdowns, sequencing and other constraints that had to be worked out with stakeholders.

“From the beginning of the project, we worked closely with the contractor preparing the design scope and cost,” he says. “It’s a much more collaborative process than I’ve seen before and that fed into the design.”

Murray says it’s the best team he’s ever worked on and the most collaborative format he’s ever worked in, and it allowed McMillen Jacobs the flexibility to come up with innovative solutions without cost being the No. 1 driver.