Measure, with $369B in new funding, could push 40% cut in carbon emissions over next decade

With Vice President Kamala Harris casting the decisive vote, the U.S. Senate passed 51-50 an economic package on Aug. 7 that authorizes $369 billion to address climate change. The bill now moves to the U.S. House of Representatives, which is expected to pass the bill later this week, and then to the White House for President Joe Biden's signature.

Senate leaders used a process called reconciliation, which only requires a simple majority to approve a budget-related bill. No Republicans voted for the bill, called the Inflation Reduction Act, despite provisions added by co-sponsor Sen. Joe Manchin (D-W.Va.) that would benefit oil and gas related energy projects and call for future project permitting reform.

According to Senate leaders, the Inflation Reduction Act is one of the largest and most comprehensive climate-change measures the chamber has ever approved—set to spur efforts to reduce greenhouse gas levels 40% by 2030, compared to 2005. “This is a great day,” Senate Majority Leader Charles Schumer (D-N.Y.) said on Twitter following passage of the legislation, which he co-sponsored with centrist Democrat Manchin.

The bill "closes about two-thirds of the remaining emissions gap between current policy and the nation’s 2030 climate target, 50% below 2005," says a detailed new analysis by researchers led by Princeton University's Andlinger Center for Energy + the Environment and Dartmouth College's Thayer School of Engineering. "By driving down the cost of clean energy and other climate solutions, the Act also makes it easier for states, cities or companies to increase their climate ambitions and reinforces the economic benefits of any future federal regulations."

Nearly $3.5 trillion in cumulative capital investment in new U.S. energy supply infrastructure between 2023 and 2032 would also result from the bill, the researchers conclude.

"The Act has the greatest impact on investment in wind power and solar PV, which nearly doubles to $321 billion in 2030, versus $177 billion under current policy," they contend. "That includes more than $20 billion in annual investment in carbon dioxide transport & storage and fossil power generation with carbon capture by 2030."

According to the analysis, the bill also would lower annual U.S. energy costs by at least 4% in 2030, a savings of nearly $50 billion per year for households, businesses and industry. Researchers note that analysis models are preliminary, with "significant uncertainty about future outcomes."

Among the bill's many components, with a sampling outlined below, is a provision to extend federal tax credits to spur solar, wind and other renewable energy projects, an extension of the 45Q credit for carbon capture, utilization and storage (CCUS) and direct air-capture projects favored by industry, and a credit to keep nuclear power plants operating. For the first time, energy storage projects would also qualify for an investment tax credit. 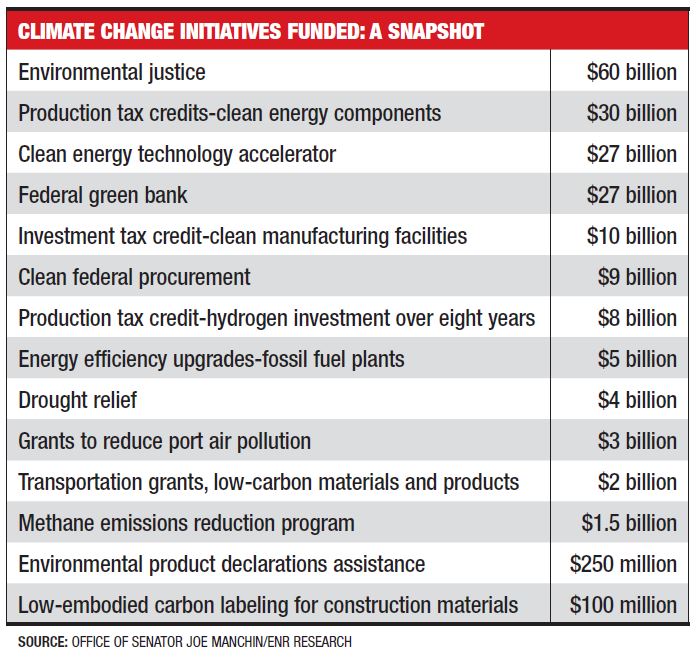 The bill sets the solar investment tax credit at 30% through 2024, which would have dropped to 22% by year end, a move that "will provide business certainty to companies leading our clean energy transition,” says George Hershman, CEO of SOLV Energy, the largest U.S. solar builder. “This legislation contains a long-term extension of the solar investment tax credit, and provides incentives for domestic manufacturers to boost deployment. The impact of this bill cannot be overstated.”

The investment tax credit extensions "also will help new floating offshore wind energy projects we will see closer to 2025, as they could not qualify for the credit prior,” says Alla Weinstein, founder and CEO of Trident Winds, which seeks to develop the projects off deeper West Coast locations that require floating turbines.

The bill also authorizes hundreds of millions to support new and upgraded transmission infrastructure and measures to decarbonize manufacturing and transportation sectors and construction materials used in federal buildings that are part of the U.S. General Services Administration portfolio.

The legislation also provides funds to pay for methane removal and other emission reduction projects at fossil fuel-fired power plants and at other high carbon-emitting industrial facilities.

Bill proponents claim an estimated $60 billion in proposed environmental justice-related initiatives in the bill, although some advocates say that only parts of some programs funded will benefit overburdened communitiies.

Moving to the Finish Line

Also included in the bill are measures to reduce health care costs and to set a !5% tax rate for most companies with $1 billion or more in annual profit. A new potential federal revenue generator is a provision for a 1% excise tax on corporate stock buybacks, which lawmakers say could raise $74 billion in the next decade with rising profits, says The Washington Post.

Groups such as the Associated Builders and Contractors and U.S. Chamber of Commerce, oppose the legislation, citing the tax hikes and some pro-labor provisions, including a mandate that construction apprentices be hired for projects covered under the bill through registered apprenticeship programs, most of which are union-affiliated.

But the bill also includes a commitment to enact separate legislation to simplify the construction project permitting process.

Manchin considered this a must as he worked with Schumer and other Senate Democrats over the past few weeks on a compromise climate bill that narrows the behemoth Build Back Better legislation, which the Biden administration favored and the House passed last year. It died in the Senate with the senator's opposition.

The majority of Senate Republicans, along with Manchin, voted on Aug. 4 to nullify White House Council on Environmental Quality regulations reinstating permit-related provisions to the National Environmental Policy Act that the Trump administration had removed.

Their “resolution of disapproval” does not likely have enough support to pass the House, but Manchin noted in a statement his secured commitments from the Biden administration, Schumer and House Speaker Nancy Pelosi (D-Calif.) to enact some permit reforms by Sept. 30.  "We are moving full steam ahead on comprehensive bipartisan permitting reform so we can efficiently and safely bring more domestic energy projects online," Manchin said.