Researchers at Arizona State University have partnered with an Ireland-based startup to cultivate a new species of tree—one that is fabricated instead of grown. The MechanicalTree, the first of which was erected recently at ASU’s Tempe, Ariz., campus, will be 1,000 times more efficient at scrubbing carbon from the air than its biological cousins, say developers.

Adorned with a multitude of sensors, the prototype tree—based on research by Klaus Lackner, director of ASU’s Center for Negative Carbon Emissions—provides a testing ground for Carbon Collect, which will manufacture and bring the product to the commercial market.

The apparatus works by extending a 33-ft-tall column up into the passing breeze. Layered inside are 150 discs composed of sorbent material that attracts and collects CO2 molecules. After about 20 minutes, the discs soak up their fill. The column then retracts into the base tank, where the collected CO2 is extracted and stored using a series of proprietary methods. “The CO2 comes out of the sorbent very efficiently,” says Reyad Fezzani, vice chairman and executive director of Carbon Collect.

While the collectors only remove 1% to 2% of CO2 in the passing air, the MechanicalTree’s output produces 95% concentrated CO2, “which is pretty high for a process that is as efficient as ours,” Fezzani says. The CO2 can then either be stored in tanks for industrial use, or sequestered underground.

Because the passive system uses no fans or blowers, it not only saves on operational energy costs but also makes the devices simpler to fabricate using fewer resources and less energy, he says.

So far, the test tree is performing to expectations, he adds. Once mass production begins, each tree will be capable of extracting 500 tons of CO2 out of the atmosphere during its 15-year anticipated lifetime, or about 200 lb per day, says Carbon Collect. 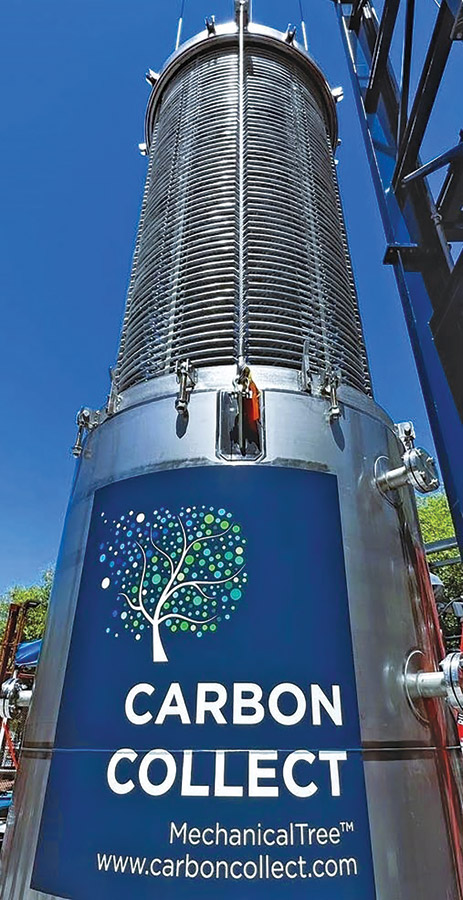 Air flows over collectors in the mechanical system, which mimics how a biological tree pulls carbon from air.
Photo courtesy Carbon Collect

Last year, the U.S. Dept. of Energy awarded the Carbon Collect-ASU team a $2.5-million grant to design three large-scale “carbon farms” in distinct climates in the U.S.—the South, Midwest and West. “Parallel to that we’re working on the supply chain and identifying who the key suppliers for all the different components are” while exploring “supply chain partners to also contribute something to the development of the product as well,” Fezzani says.

Depending on permitting and other factors, he anticipates the farms to come online in 2025 or 2026.

Developers envision a near future where the carbon farms are located next to manufacturing and industrial plants that consume CO2. Currently, industrial CO2 is trucked or piped over often long distances. A colocated farm—analogous to a solar plant sited next to the facility it powers—would further boost efficiency by simplifying logistics and reducing transportation costs and energy use, says the team.

ASU’s Center for Negative Carbon Emissions continues to study a myriad of other carbon capture methods and optimizations, from designing new sorbents to maximize CO2 uptake, to using atmospheric carbon capture that would feed micro algae growth for fuels or other high-value products.