Ragged tan lines and “raincoats.” Exposure to the elements during construction forced workarounds for the team that built Milwaukee’s 284-ft-tall Ascent, declared the world’s tallest timber-and-concrete building on July 20.

Trucks, trains, ships and even more trucks. Long before the wood—shipped from Austria—hit the staging area for the 25-story residential tower, unforeseeable conditions snagged the schedule. This included a shortage of shipping containers and port havoc on the East Coast, after the container ship Ever Given ran aground and blocked the Suez Canal in March 2021.

“The mass timber went as well if not better than expected, but we had supply chain issues” that caused the schedule to slip, says Tim Gokhman, managing director for Ascent’s local co-developer, New Land Enterprises, which is in partnership with Wiechmann Enterprises. 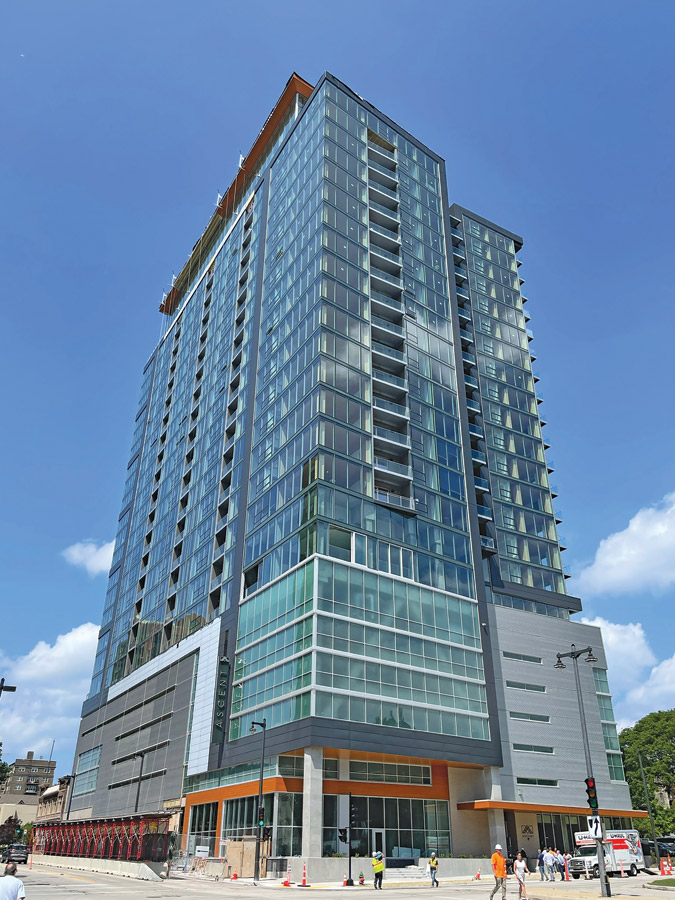 New Land Enterprises expects to develop another tall timber high-rise, based on its experience with Ascent, which is leasing ahead of projections.
Photo courtesy C.D.Smith & New Land

Construction of Ascent, designed by Korb + Associates Architects with structural engineer Thornton Tomasetti, began in August 2020. Completion was originally set for July 1. The first tenants began moving in through the 14th floor on July 15. Gokhman expects the rest of the interior build-out to wrap up at the end of August.

Once the move-in began, the Council on Tall Buildings and Urban Habitat designated Ascent the tallest timber-and-concrete structure. And though the 488,000-sq-ft building has broken height and size records for pure timber and timber-and-concrete structures, it barely exceeds the height of the tallest pure-wood building—Mjøstårnet, a 122,000-sq-ft building in Brumunddal, Norway.

Lagging far behind, the second tallest timber-concrete hybrid in the U.S. is the 39.6-m INTRO-Residential Building in Cleveland, finished this year. 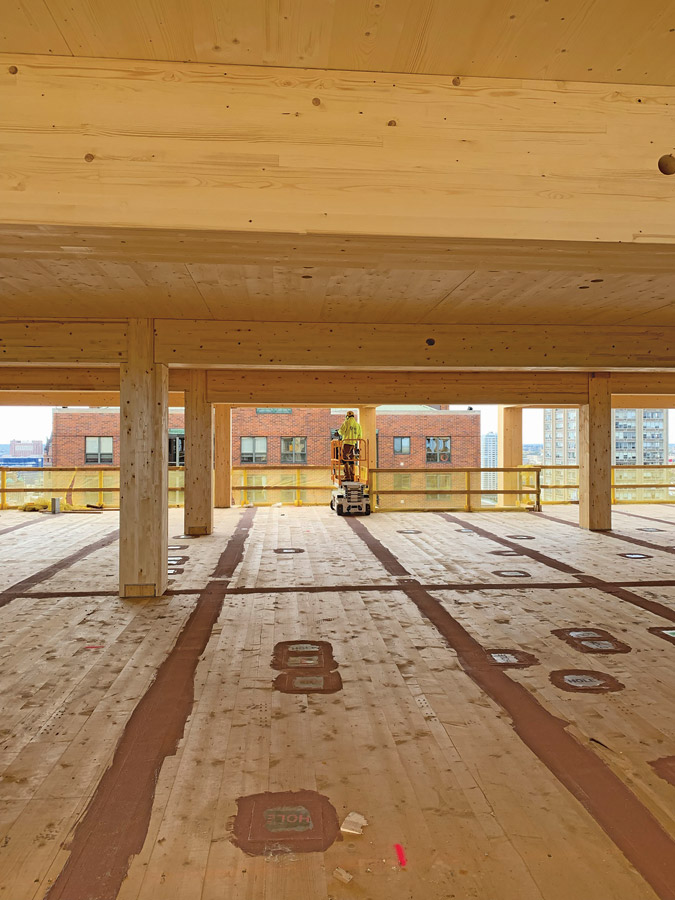 The job was a tall order. No one on the initial team had in-depth experience with supertall mass timber. Timberlab, the timber procurement consultant, filled the gap, as did other wood experts.

City approvals took two years, thanks to a collaborative process with the city that resulted in permission for the building to exceed the code’s height limit by nearly 200 ft.

The team credits planning, with early participation of the relevant subcontractors, and technology for rendering the job possible. Ascent was designed, fabricated and erected using a heavily detailed digital twin. That allowed for every beam, column and flooring panel to arrive on site ready to be assembled, with holes predrilled to within 1/16-in. accuracy.

“We modeled every single [mechanical-electrical-plumbing] penetration” down to 1 in., says Johansen.

To meet the fabrication schedule, the completed model, which was sent to Timberlab in stages, had to be done by December 2020. Predrilled penetrations were nearly 100% accurate, says Jason Korb, owner of Korb + Associates. He credits the digital twin and intense coordination for the success of the fit-up.

Planning aside, no one could have anticipated the train wreck of sorts regarding deliveries of the timber, much of it exposed, from the two fabricators in Austria. Glulam columns and beams came from Wiehag Timber Construction in Altheim; CLT for the floors came from KLH Massivholz in Teufenbach-Katsch.

In theory, each single story of fabricated European spruce CLT and the glulam components would arrive at the port of Milwaukee staging area four weeks ahead of need.

Though timber shipments were never scheduled to go through the Suez Canal, the blockage flooded East Coast ports with other ships, causing chaos, says Johansen. 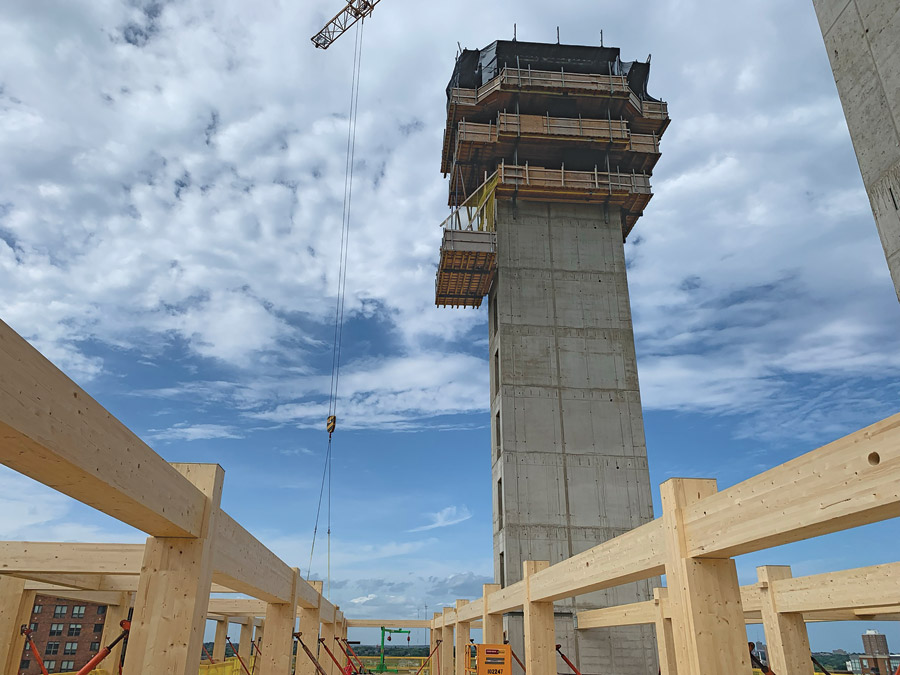 Each shipment, scheduled to take 35 days, took 55 days. And shipments came through six ports. “If we had something catastrophic during shipping, we couldn’t switch out members,” because columns and beams were slightly dimensionally different for each floor and within a floor, he explains.

The container shortage also caused problems. The first level of CLT flooring arrived in six containers on different ships instead of one. That floor then went up about five days late.

The four-week buffer “really helped to ease the pain of any sort of schedule impacts,” says Johansen. “Our first couple of floors arrived basically on time” but not early enough to properly stage them for lifting, he adds.

Most of the serious issues affected only the first couple of floors. Still, the uncertainty and scrambled deliveries “added to stress levels for at least a month,” Johansen says.

After a learning curve, the 12-person erection crew cut the time to install a single floor from nine to five days. The average was seven days for the 18 levels of timber structure.

Timber erection is similar to steel erection, including the difficult embed connections of the beams to the concrete cores. Different settling rates and different allowable tolerances were accommodated, says Johansen. In addition, Thornton Tomasetti was on site to advise on the structural viability of the 10 or 15 cuts into the timber needed in the field. 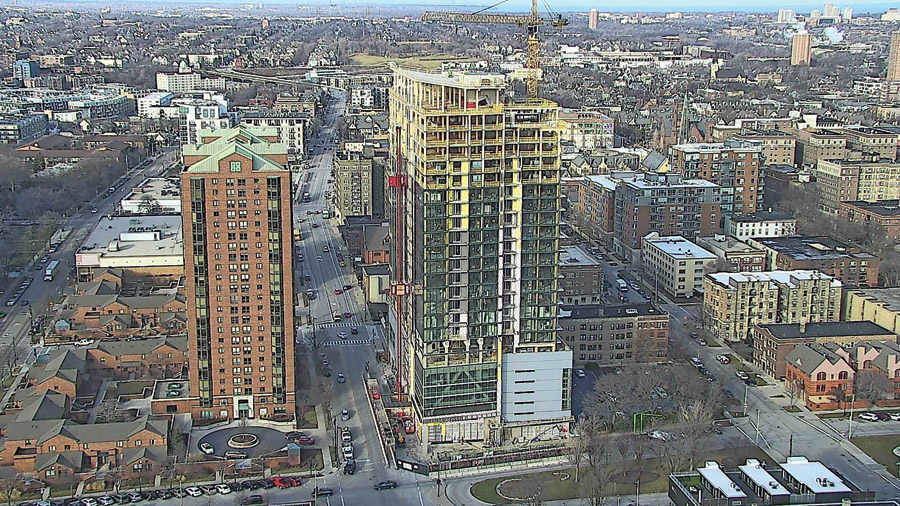 Developer went into uncharted territory to create a market niche in Milwaukee and a role model for tall timber structures in the U.S.
Photo courtesy C.D.Smith & New Land

Pain points became much more focused once the timber started rising. For example, columns came wrapped in protective plastic. Initially, crews only peeled away the sheeting at the column tops to set the beams and at the bases to set the columns. After a weekend of exposure to the sun, there was an unwanted tan line. Lesson learned: For expressed wood, remove all the plastic before erection.

Another lesson involved moisture mitigation during construction—necessary to keep the exposed CLT ceilings and their supports from staining. After every rainfall or snow storm, workers arrived with squeegees, leaf blowers and a vacuum machine to swab the decks. In addition, workers applied a coating to the floor panel seams to keep water from seeping through and staining the wood ceilings and other exposed components below.

New Land considers tall timber a market differentiator for downtown residential development, based on wood’s beauty and growing popularity as a renewable building material. At a July 20 press conference, Gokhman said the wood used in the building is replaced by natural growth in North American forests every 23 minutes.

To date, about 100 of 259 apartments are leased, which is ahead of projections. Barring unforeseen circumstances, New Land plans to develop another mass timber high-rise in Milwaukee.