With extreme heat creating weather emergencies in much of the country, as well as globally, and with his expansive climate change agenda stalled in Congress, President Joe Biden announced on June 20 new executive actions that include adding millions to a federal resilient infrastructure fund, beefing up U.S. Labor Dept. workplace heat protections and expediting new wind energy construction in the Gulf of Mexico and along the southeast Atlantic coast.

Biden announced the initial actions at the decommissioned Brayton Point coal-fired power plant site in Somerset, Mass., where a planned power cable manufacturing plant will be built to enable three utility-scale offshore wind projects in New England to connect to onshore power grids. Italy-based Prysmian Group will manufacture 248 miles of heavy-duty cables at the facility, which the firm said would have final investment of $300 million.

Biden termed as an "emergency" and a “clear and present danger,” the climate situation that now puts 100 million Americas under heat alerts, but he did not invoke presidential authority to declare a formal climate emergency that would enable use of military funding sources or enable executive actions under the Defense Production Act—as climate change activists in Congress and elsewhere had hoped.

President Biden and White House officials hinted that the move could still come to declare a climate emergency that would authorize him to redirect federal funding into climate emergency programs. He invoked the act in March to boost U.S. production of critical minerals and clean manufacturing.

White House Climate Advisor Gina McCarthy told reporters that Biden is not “shying away” from treating climate as an emergency.

“We’re going to build a different future,” Biden said, noting that his climate initiatives would be expanded "in coming weeks" to align government policy with “formal official government actions through ... executive orders and regulatory power that a president possesses,” including accelerated federal permitting for projects and added U.S. government resources.

The American Council on Renewable Energy said Biden’s executive actions are a meaningful step to address the climate emergency, “but truly tackling the worst impacts of climate change” will require legislation action. “We urge Congress to not miss the opportunity to enact a long-term, stable and predictable clean energy tax platform this year that is capable of effectively addressing the climate crisis,” it said in a statement.

In his remarks, Biden called on U.S. governors, lawmakers, state public utility officials and developers to "be part of the solution" and not be "roadblocks," noting a "duty right now, to our economy, to our competitiveness in the world.”

For now, Biden announced that funding would double this year—to $2.3 billion—for the Federal Emergency Management Agency's building resilient infrastructure and communities program, known as BRIC, which assists communities to upgrade infrastructure such as sea walls and cooling centers to withstand climate-linked hazards.

The U.S. Labor Dept. also has conducted 564 heat-related inspections in 43 states under its expanded program to address heat illnesses and injuries, said the White House, with the agency also now developing the first federal workplace standard to protect workers from extreme heat in high-risk sectors such as construction.

As a key part of the administration's clean energy push, the U.S. Interior Dept. identified the first two potential wind energy areas for development in the Gulf of Mexico, including one about 24 miles off the coast of Galveston, Texas and another about 56 miles off the coast of Lake Charles, La.—areas where federal studies have pointed to strongest and most sustainable wind strengths.

The areas are a 700,000-acre subset of an original 30 million acres announced in October 2021 that extended from the west coast of Florida to the coastal tip of Texas (see map below). 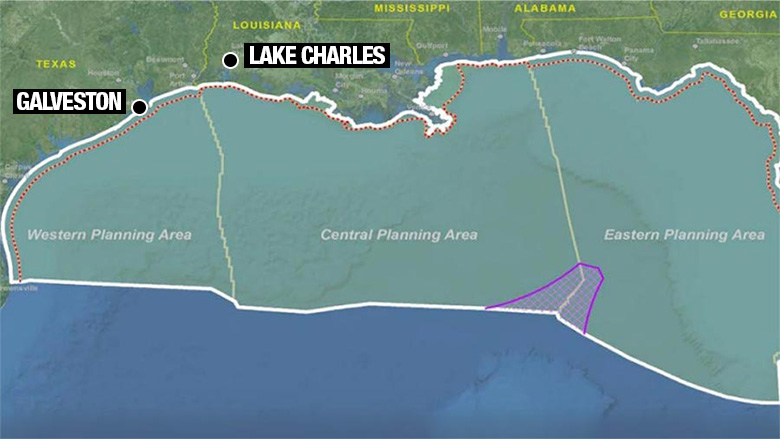 The public can comment on the draft wind energy areas for 30 days beginning July 20.

However, the House of Representatives on July 14 passed an amendment to pending defense spending legislation that would end the moratorium on offshore wind development in the region.

Specifically, it restores Interior's authority to hold offshore wind lease sales in federal coastal waters of those states, but left in place a leasing moratorium in the eastern Gulf of Mexico at the request of the U.S. Defense Dept.

The bill now heads to the Senate, but it is not certain that a compromise bill expected by year end will also include the amendment to lift the offshore wind moratorium.