After more than 30 years of operation, Terminal 4 at Phoenix Sky Harbor Airport is finally complete, at least in terms of the size and capacity intended in its original design.

Opened in 1990 with 44 gates across five concourses, Terminal 4 was configured to expand in step with growth in Sky Harbor’s passenger volume. Two separate concourse additions were completed in 1998 and 2005.

This summer, the $310-million eighth and final concourse, designated as S1, will add eight gates and 275,000 sq ft to what is already Sky Harbor’s largest terminal and provide new facilities to serve travelers and support its tenant airlines’ long-term activity. 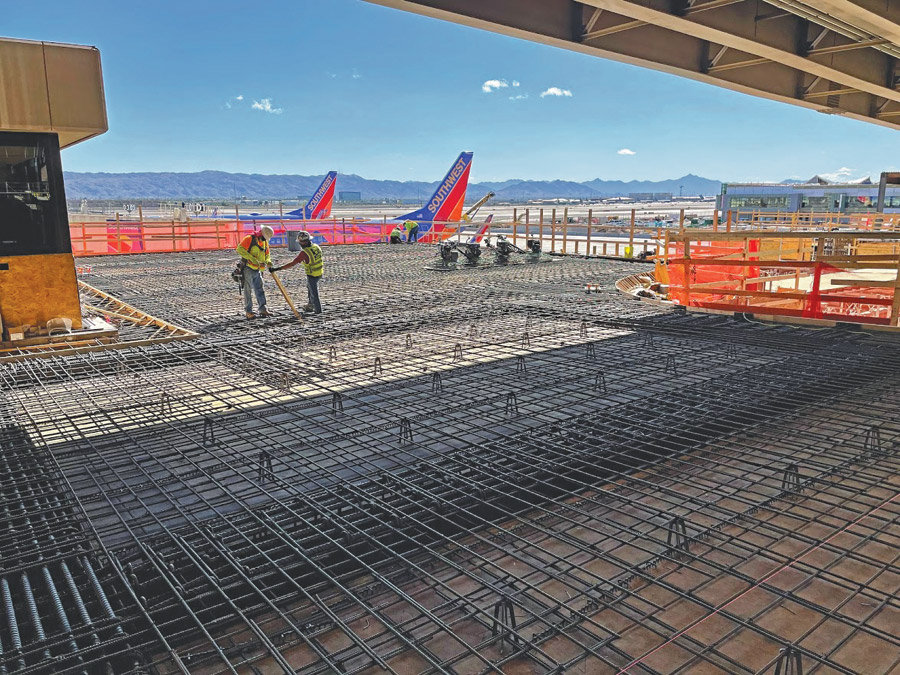 The crew checks rebar and prepares for concrete placement at the North South Bridge.
Photo courtesy of McCarthy Building Cos.

Given the many ways in which airport operations have evolved over the past three decades, Concourse S1 represented an opportunity not only to add capacity, but also to improve the efficiency of Terminal 4’s existing elements, all while preserving the continuity of its function and appearance.

The new concourse also incorporates state-of-the-art elements and addresses needs that weren’t on the proverbial radar when the original airport took shape—the latest baggage screening and safety technology, extensive daylighting and an interior layout intended to take some of the stress out of the hectic pace of modern air travel. It also includes approximately 14,000 sq ft of electrochromic glazing that can be tinted as needed depending upon weather and sun angle, with the added potential of a 25% reduction in energy use. 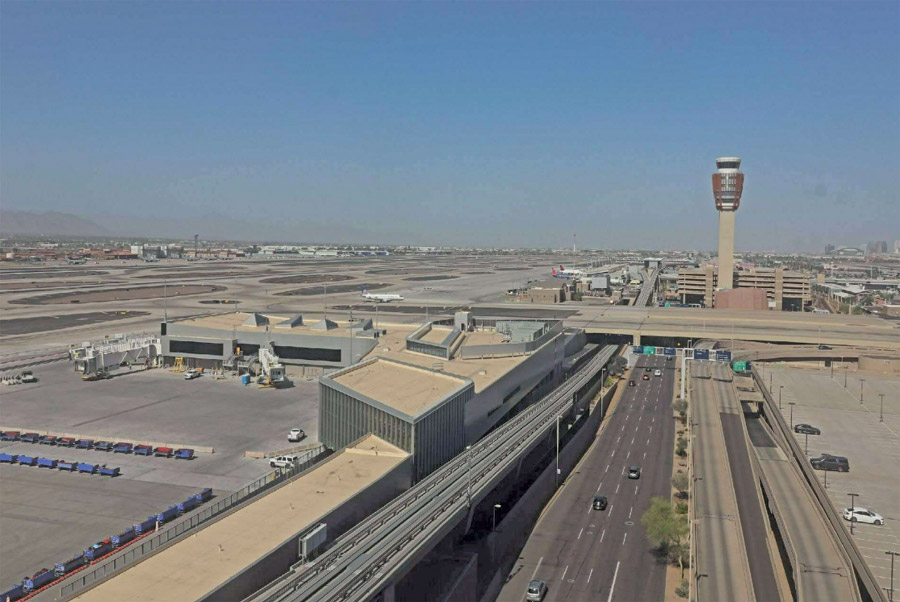 Terminal 4 is the airport’s busiest terminal, handling more than 80% of the airport’s 40 million annual passengers. The Terminal 4 expansion is nearing completion, with its connection to SkyTrain and Sky Harbor Boulevard shown here.
Photo courtesy of McCarthy Building Cos.

Candace Huff, Sky Harbor’s deputy aviation director for the design and construction services division, credits these and other innovations to the construction manager at-risk (CMAR) project delivery, which allowed the team of SmithGroup and Corgan to develop the design in concert with general contractor McCarthy Building Cos.

Huff notes that the opportunity to conduct constructibility reviews and plan the construction process as the design evolved weren’t the only advantages to the approach.

“You always have to understand that your construction is secondary to airport operations.”
—Brandon Moon, Project Director, McCarthy Building Cos

“We prequalified key subs early, which allowed us to buy the job out before COVID and before supply chain issues and prices started to escalate,” she explains.

SmithGroup senior designer John Tran says Concourse S1’s location at the southwest corner of the terminal enabled the design team to make Arizona’s abundant daylight as much a design element as the finishes for the passenger level’s hold rooms, retail concessions and the spacious new 300-ft-long connecting bridge to the existing south concourses.

“One of the great things we have about the desert is the way light moves through a space,” Tran says. By combining natural light with interior finishes and layouts, “we sought to create a series of different experiences that changes throughout the day. Each time you come to the airport, you might experience something a little bit different from before.”

In addition, Tran adds, Concourse S1 fronts both Airport Boulevard, Sky Harbor’s main circulation boulevard, and the airport’s automated Sky Train people mover system, both of which separate Terminal 4’s north and south concourses. The result, he says, creates a nexus of “planes, trains and automobiles and a sense of connectivity to the rest of the airport, and makes it integrated and more accessible visually.” 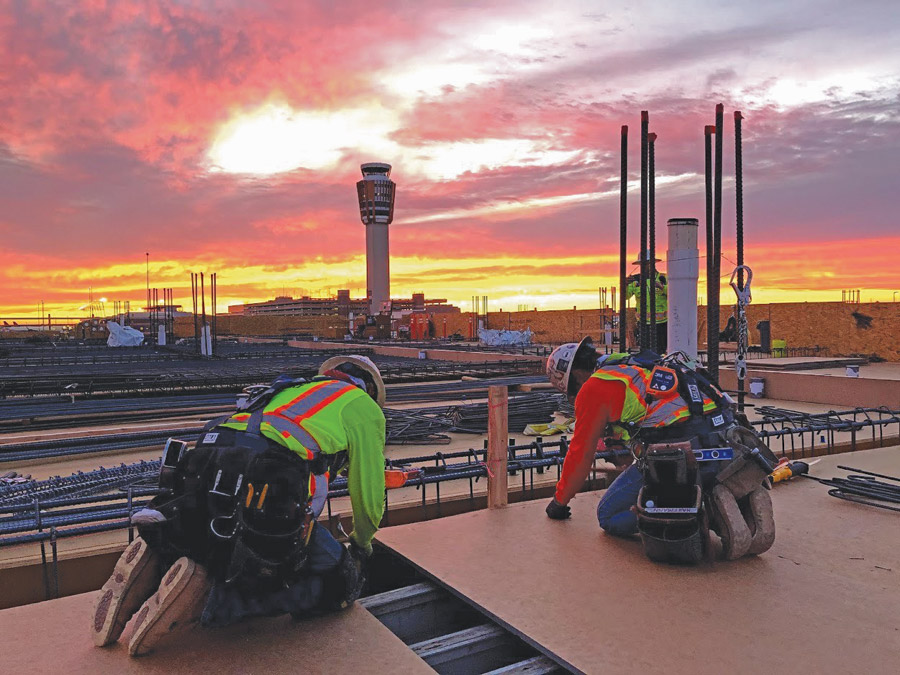 The finishing team sets deck panels and secures forms for the first deck concrete placement on the passenger level (Level 2) of the new terminal concourse.
Photo courtesy of McCarthy Building Cos.

“You always have to understand that your construction is secondary to airport operations,” says McCarthy project director Brandon Moon. “More than once during the concourse project, we had to do things differently or change plans to make sure operations weren’t interrupted.”

Moon says that while much of the jobsite could be isolated from the rest of the airport with fencing, the new concourse would rise within 10 to 15 ft of the SkyTrain. Erecting a 400-ft-long, 40-ft-tall protective net between the electrified rails and the concourse “provided a physical barrier for workers to feel more comfortable,” Moon says.

And while Concourse S1 was an expansion of an existing facility, the project team took no chances with underground obstacles and surprises. During the planning stage, McCarthy’s internal mapping team detailed locations of utilities, foundations of demolished structures and other features. In addition, early-phase laser scanning of existing structures by McCarthy’s virtual design and construction experts helped the designer and contractor find ways to make both the construction process and budget more efficient. 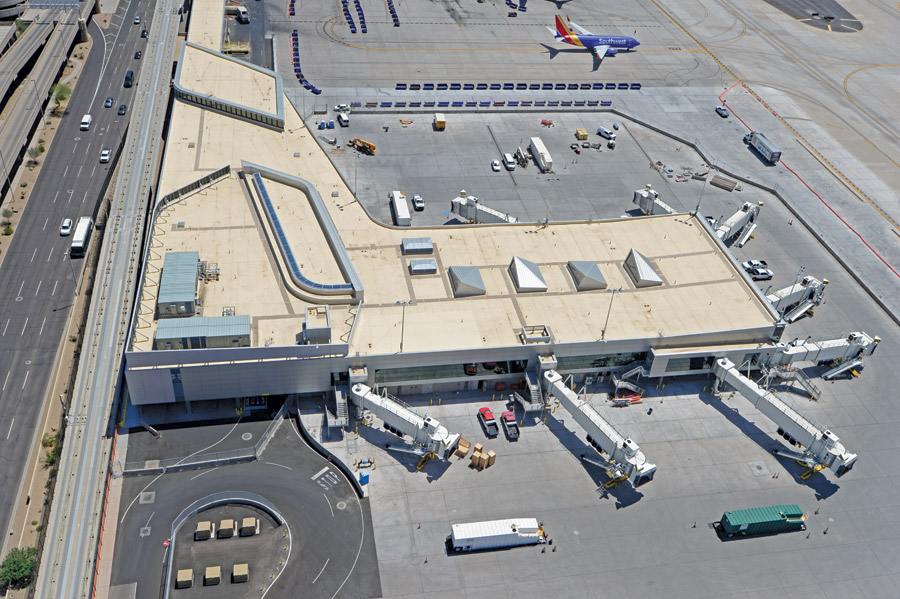 Rather than creating the originally planned full basement for baggage transfer equipment, for example, the project team found that with some strategic space reallocations, most of the system’s new components could be placed in remodeled spaces. That shrank underground construction needs to four tunnel extensions totaling 702 linear ft to serve the new gates.

“We excavated in 4-foot lifts about 20 feet down to the main tunnel level, shoring existing soil as we went along,” Moon says. Workers then built the concrete tunnels, waterproofed the walls and backfilled in similarly sized lifts.

“The approach required less earthwork and allowed airport operations to continue without major excavation,” Moon adds. It also simplified the foundation system to just over 140 concrete footings and only a handful of deep foundations with filled piers.

Erection of the concourse proceeded smoothly, Moon says, requiring 49.6 million lb of concrete, 1.9 million lb of rebar and 92,000 sq ft of exterior metal panels. The project also added a 580-ft-long bridge to link the north and south concourses—a feature that Huff says represents another innovative adaptation from the original design.

Rather than the original plan of creating a direct connection between Concourse S1 and its north side counterpart, the connector bridge was shifted to the existing Terminal 4 structure. This allowed the design team to “add security screening lanes for both the north and south concourses and gained a lot of post-security checkpoint real estate,” Huff says. As a result, screened passengers can now make a full 360-degree circuit of Terminal 4 on the same level.

While the connector bridge constituted most of the project’s crane activity, Moon says all picks had to be carefully synchronized with SkyTrain’s operational schedule.

“We’d set a steel beam, connect it, then the train would be released,” he says. “Everyone was on radios to make sure we kept things coordinated.” 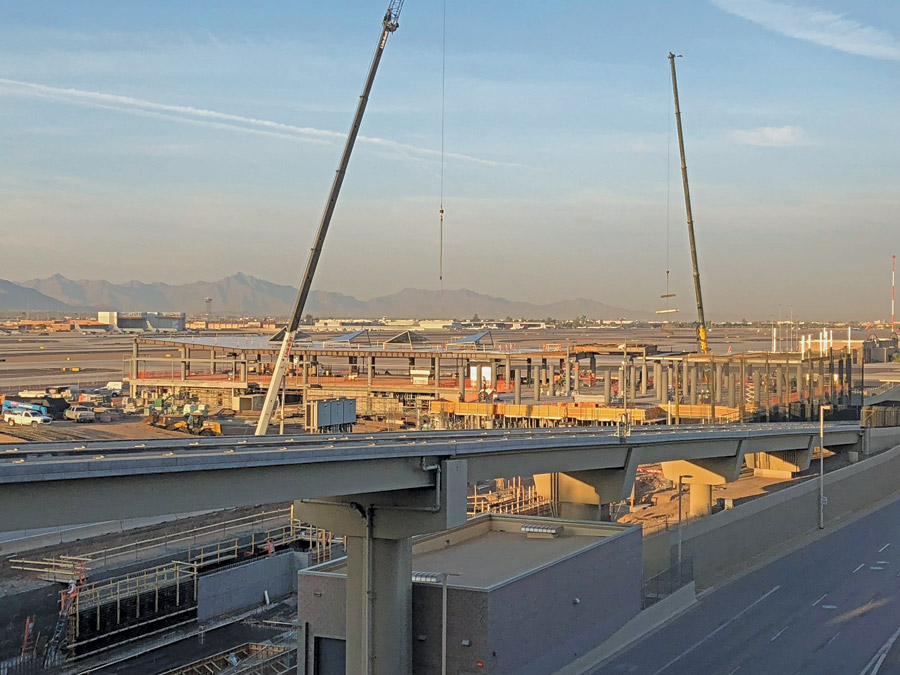 Some harried travelers may wish their journeys progressed as smoothly as Concourse S1, which achieved substantial completion on schedule in late April. Huff says early contractor engagement was absolutely critical to meeting, and often exceeding, the project goals by helping to reduce the budget by $84 million through a variety of cost-saving measures.

“A lot of owners wait until the design is 60% complete, then it’s too late to make major changes,” Huff explains. “To deal with constructibility issues and get out in front of all the issues—including working with the [Transportation Security Administration] and what they need to test and certify—it goes miles ahead to have your contractor and design team working in concert with the owner as early as possible.”

As a further illustration of the benefits to that approach, Moon points to Concourse S1’s scheduled debut in mid-June, a date set when the project got underway in 2018—a time before terms like COVID, social distancing and supply chain disruptions were part of everyday conversation.

“We’ve had different sequences and had to adapt, but the end date never changed,” he says. “It’s a soft landing and in good position for transition to the airport. It’s not always like that.”