T he 100-km, $19-billion Elizabeth rail line opened in London last month after more than a decade of construction. Teams used a digital workflow to install over 27,000 cladding panels in three of the new stations, reducing needed weight and improving efficiency.

“The digital workflow on this project meant we were able to reach new levels of efficiency and accuracy in the production of the panels,” says Matthew Luhrs, general manager with contractor GRCUK, now part of Laing O’Rourke, which held the contracts for stations at Liverpool Street, Tottenham Court Road and Custom House. “Software typically used in manufacturing was brought into the project to allow us to calculate the exact size and shape each panel needed to be to meet technical standards while fitting the complex geometry of the tunnels.” 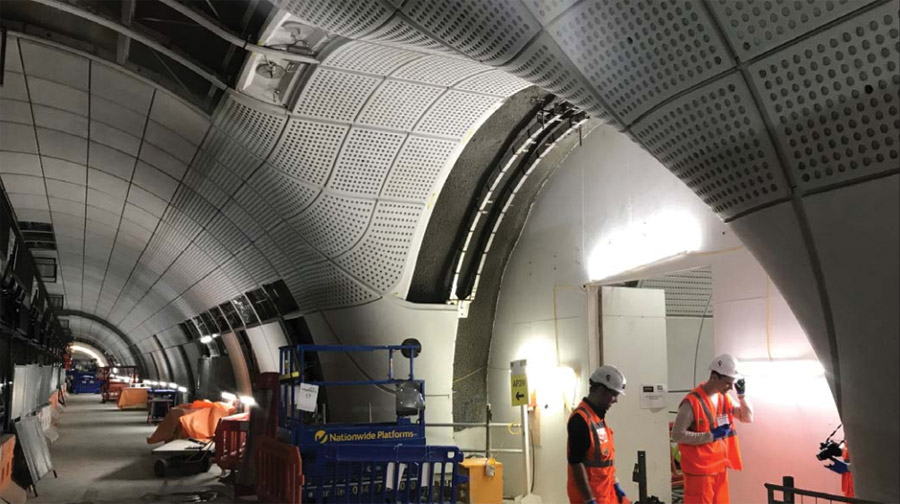 “The tunnels were made by drilling through the ground and spraying a cement mixture onto the walls to stabilize them as they were excavated,” Johnston notes. “So, the walls wavered along their designed route by a significant amount.”

The design called for installing a single rail along the walls, precisely positioned with a laser, and another along the platform level. “This meant we could ignore the tunnel lining and completely control the environment through these two fixed points,” says Johnston. “This greatly reduced the number of fixing bolts we needed and allowed us to use a folding system to install a simplified fixing grid that unfolded between these two rails. The cladding installation was therefore independent of the geometry of the sprayed concrete tunnels. This meant we were working at zero tolerance.” Typically, there would be a tolerance of plus-or-minus 10mm to 20 mm. 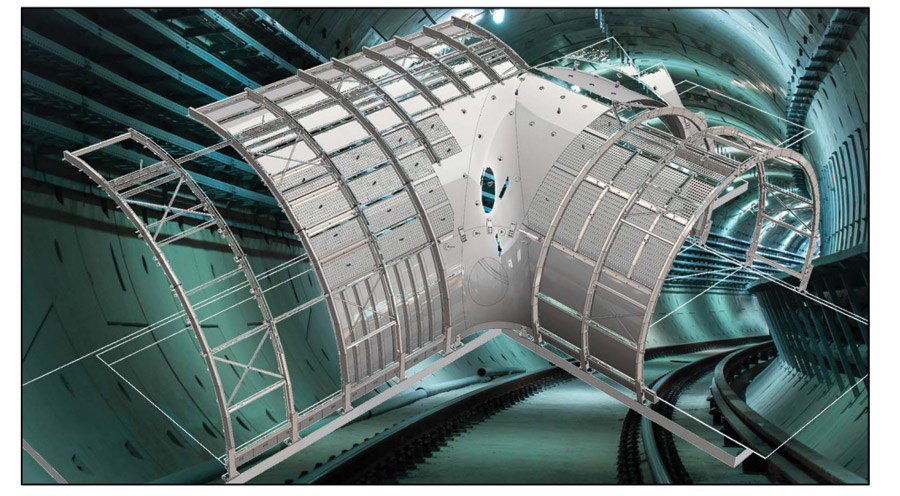 Designers built 3D models in digital formats fabricators can use, eliminating fabrication drawings. The panels were made to specifications based on the tunnel geometry. Point-cloud scans of station interiors were developed with Autodesk and Solidworks. “In the Solidworks model, every nut, bolt, screw and washer was included,” says Johnston.

The design resulted in a 58% reduction in the overall weight of the cladding and support structure, allowing for two-person assembly crews. Panel thickness was reduced from 25mm to 12.5mm. Total quantity of parts was reduced by 46%. Glass-reinforced concrete was also utilized in some structural arches within the cladding system rather than steel, Johnston adds. “We used large molds to create these self-supporting arches that tied back into the wall at as few points as possible while also allowing for movement in the tunnel over time.”

“It was a feat of tech-led engineering that was pioneering when we used it, and will be for some time yet,” Luhrs says.