Two elevated concrete guideways are emerging across the desert east and west of Cairo, forming what will be the world's longest monorail. From either side of the River Nile, about 62 miles of monorail in two lines are spreading out from the Egyptian capital to new administrative and residential developments.

The monorail will have no track, but its rubber-tired trains will run directly on concrete guideways, says a senior project engineer. Precasting thousands of 85-to-100-ft-long guideway prestressed concrete beams to such precision is a challenge. But difficulties in diverting utilities have been more disruptive.

One monorail line will run for 35 miles from east of the Nile out to the New Administrative Capital now taking shape in the desert. From the other side of the river, the second line will reach 26 miles west to 6th of October City.

To avoid having to cross the Nile, the monorail's ends in the city are about 7.5 miles apart, says Waleed Abdel Fattah, regional managing director at Hill International, the owner's project manager. The two lines will be connected by the metro. 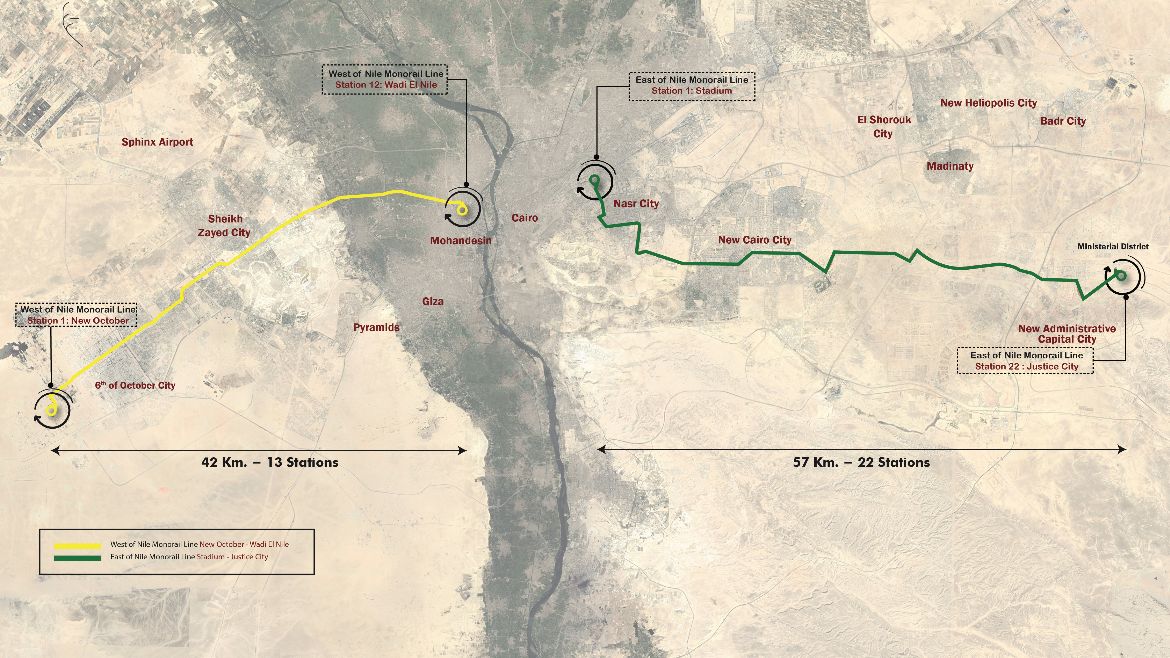 The combined branches will be the longest monorail line in the world. Map courtesy of Hill International

Egypt's National Authority for Tunnels in August 2019 signed a contract to design and build the lines, then operate and maintain them for 30 years. The contract had a design-build civil construction value of about $1.4 billion, with trains and systems adding $1.5 billion.

The successful consortium was led by Canada's Bombardier Transportation, which is building the trains in England. A U.K. export credit linked to the train order, signed in August 2020, is underpinning a $1.9-billion project bank loan to Egypt. Paris-based Alstom Group acquired Bombardier last year.

Arab Contractors is handling design-build civil work on the west line with a value of around $560 million. Orascom's work on the longer, east line is worth $780 million. While the contractors are working separately, there was integration during design as well as some common procurement, says a project source. The contractor was not available for comment.

To produce numerous guideway beams, the two civil contractors operate their own precasting facilities but share equipment suppliers. Since trains will run directly on the beams, "the final ride quality is very much dependent on the precision and casting tolerances," explains a manager.

"The whole alignment geometry has to be designed into each beam, including vertical and horizontal curve, spiral transitions, superelevation at curves, as well as gradients up to 6%," he adds. The design must also account for long term creep and shrinkage.

With about a third of the monorail in place, snags with utility diversion have hindered progress. Since it was not possible to fix prices for diversions in the construction contracts, the consortium is responsible only for surveying the route and defining its requirements. The owner is coordinating the diversion work with relevant authorities.

About 45% of the east superstructure is now in place, pointing to completion later than the early 2023 deadline originally flagged by the contractor. Trial operations look set to start mid next year. About 20% of the west guideway is up and now due for completion by the end of next year, a few months later than first planned. Until earlier this year, "we had major challenges," says Hill's Abdel Fattah. "But...now it's clear."