This website requires certain cookies to work and uses other cookies to help you have the best experience. By visiting this website, certain cookies have already been set, which you may delete and block. By closing this message or continuing to use our site, you agree to the use of cookies. Visit our updated privacy and cookie policy to learn more.
Home » ECS Grows From the 'Tip of the Spear'
SoutheastSoutheast Construction Companies
Top Design Firms | ENR Southeast Design Firm of the Year

If the 2021 performance of Engineering Consulting Services (ECS) is any indication, the “new normal” of the Southeast’s post-pandemic design and construction market will look a lot like the “old normal,” only busier.

“The urban markets are on fire,” observes Derek Clyburn, president of the ECS Southeast subsidiary, adding that the pandemic appears to have only temporarily slowed the region’s preexisting trends of population growth, expansion of manufacturing development and ramped-up infrastructure construction.
The arrival of vaccines and eased mandates during 2021, Clyburn adds, unleashed “a lot of pent-up demand.” 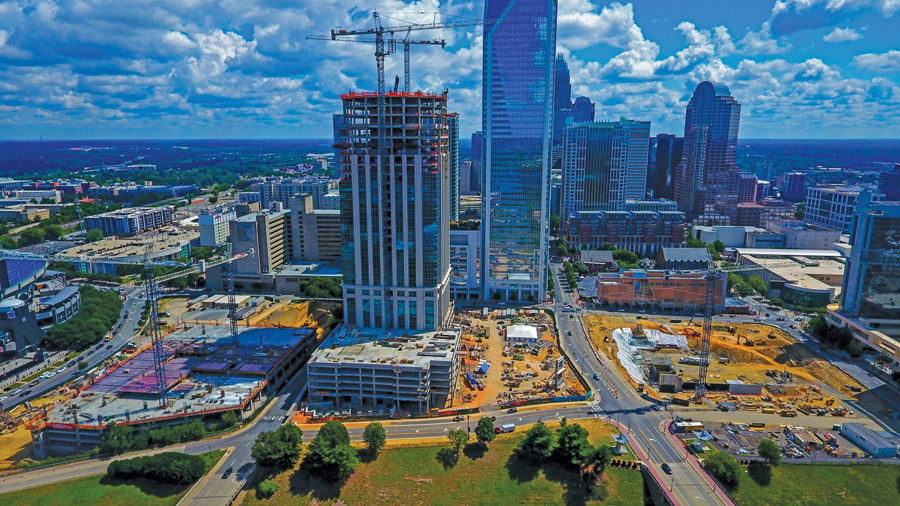 But the selection of ECS as Southeast Design Firm of the Year was also about being in the right places at the right time. The firm enjoys a strong presence in most of the region’s key sectors, including several high-profile projects focused on the next generation of mobility.  These include Toyota’s new $1.29-billion lithium battery manufacturing plant near Greensboro, N.C.; the 1.2-million-sq-ft expansion of SK Battery America’s Commerce, Ga., production facility; and a $4-billion assembly plant in Chatham County, N.C., for Vietnamese electric vehicle maker VinFast, set to begin production in 2024.

In Chatham County, ECS has earned kudos from the Chatham Economic Development Corp. (CEDC) for its work providing environmental and geotechnical engineering services for two megasites the county has been marketing for industrial development.

Describing ECS staffers as “exceptionally professional,” Michael Smith, president of the CEDC, says: “They have top-notch scientists working for them, and it really gives our clients a better understanding and level of confidence when we have ECS in the room with us when we’re talking about site characteristics.”

Smith says interest in the sites has soared in the last year. Key to that was getting the sites certified by the state of North Carolina for future industrial development. ECS contributed significantly to the certification effort, Smith adds, referring to them as a “partner” as they gathered the information needed for the 32 data points required by the state program.

“In those types of situations, we need to have a team of people that we can rely on and trust and that can build trust with clients quickly,” Smith adds.
ECS also has also been closely involved with Nashville’s soon-to-open Four Seasons Hotel, providing geotechnical services for deep foundations and helping the project owners reduce soil disposal fees under Tennessee’s beneficial use program.

In Florida, ECS is providing services across multiple sectors around the state, ranging from a new 300,000-sq-ft headquarters for financial services provider FIS in Jacksonville, Fla., to a 40,000-sq-ft memorial honoring victims of the January 2016 shooting at the Pulse nightclub in Orlando.

ECS is also established with the region’s transportation agencies. Current assignments include subsurface investigation and roadway recommendations for the proposed widening of a 14-mile stretch of State Route 73 near Charlotte and Florida’s First Coast Expressway project. 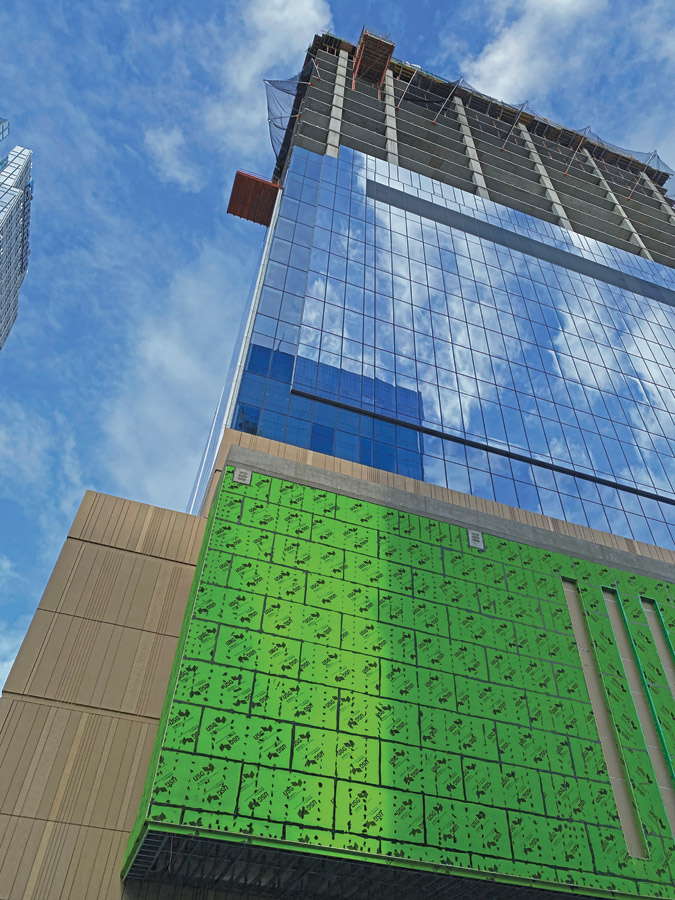 “It’s a marginal cost compared to construction costs and time,” Champion explains, “so investors and owners are all trying to enter or expand their presence in the market as quickly as possible.”

Because such bustling markets understandably attract significant competition to provide those critical early-phase design and consulting services, Clyburn says ECS’ speed of engagement is a decided advantage for new and ongoing clients.

“We’re the tip of the spear as the opportunity is unfolding,” he says. “For us, that means providing services to meet a client’s specific criteria, whether it’s time to market, minimizing exposure due to market conditions or taking on special tasks like adapting an existing structure to accommodate just-in-time manufacturing.” 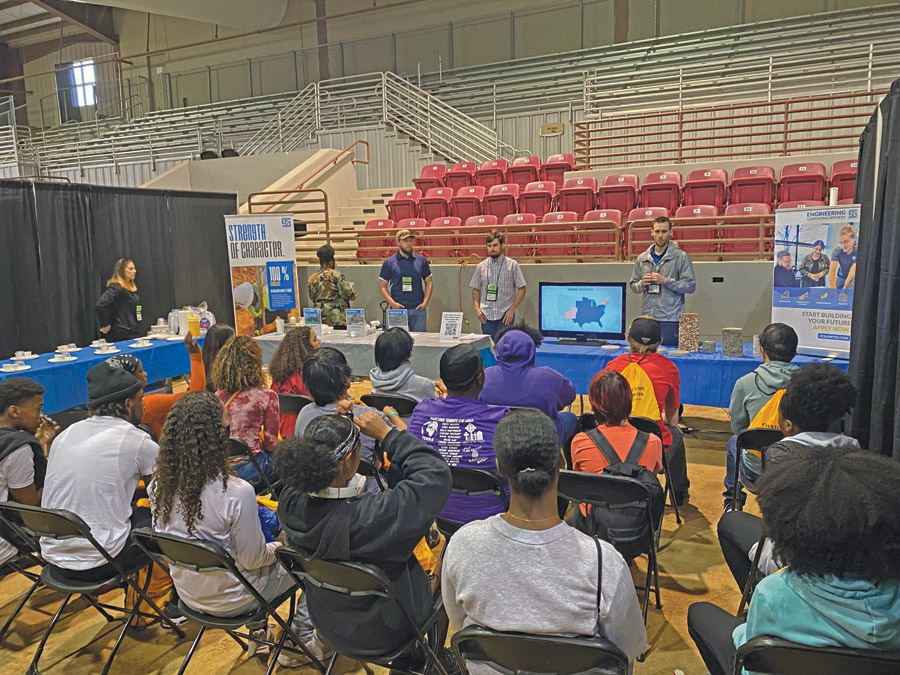 Clyburn adds that because clients often have only one shot to take advantage of a particular opportunity, “everything has to be right.”

Consistently meeting those needs in terms of time and quality, adds Champion, requires people who possess technical skills “but also operate in a culture that encourages entrepreneurship and empowerment of team decision-making, combined with the force and resources of a larger company.”

Ken Stoltenberg, director with development firm Mercury Advisors, Tampa, attests to ECS’ ability to deliver. “They’re straightforward in their pricing, and they do what they say they’re going to do. That’s what we want out of that type of vendor.”

While ECS has stressed organic growth since its founding in 1988, the company also has acquired other firms over the years, with the most recent Southeast-area addition being Atlanta Environmental Management in early 2020. Last year, the company reports adding more than 100 new employees as well as several new offices along the Gulf Coast, including in Mobile, Ala.

Far from being a conventional “top-down engineering company,” Champion says, “we build and empower the boots on the ground and provide them the support to dominate the industry. This results in developing, retaining and recruiting the best people in our industry.”

Part of that effort includes a commitment to diversity and inclusion. Half of ECS’ corporate principals are women, while all three female branch managers are based in the Southeast, including two who were named to their respective posts last year.

ECS is working to increase that number through corporate programs such as Promoting All Women’s Strengths (PAWS), which offers meetings with guided discussion topics on a variety of topics that have included developing mentoring relationships with junior staff, work/life balance and breaking down communication and cultural barriers. 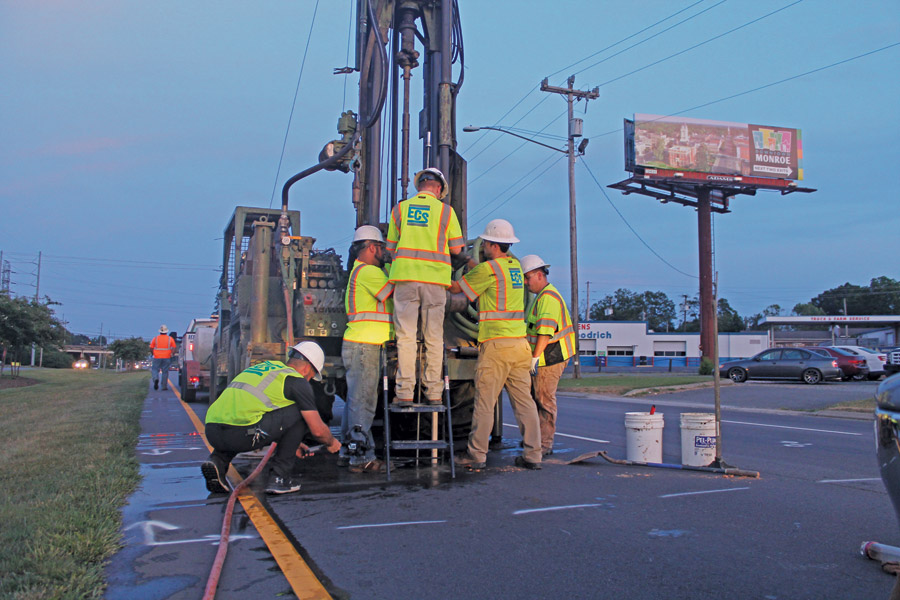 The ECS exploration team captures existing pavement section and subsurface data during a pavement design investigation for use in designing an overlay for a section of US Highway 74 in North Carolina.
Photos courtesy ECS Southeast

Clyburn would like to see the speed of these and other diversity efforts accelerate, but laments that women remain underrepresented in civil engineering curriculums, which, in turn, are often overshadowed by other science and technology disciplines.

Talent could well be the biggest obstacle to ECS sustaining its current growth path in the Southeast. Despite the looming uncertainties of a potential recession, inflation and November’s mid-term elections, Champion says the company’s versatility will be a plus as long as there are enough people available to help capitalize on opportunities such as an expected uptick in infrastructure spending.

“We do feel like we are in a good position to grow and gain market share in any type of economy,” he says.

Clyburn goes a step further, calling ECS “a battle-tested company that’s prepared for whatever is coming.”

PCL: Contractor of the Year