In March of 2020, as the COVID-19 pandemic swept across the U.S., bringing with it a wave of anxiety that rattled jobsites, construction workers and contractor executives alike, the leadership of Tampa-based wall and ceiling specialty firm KHS&S Contractors stayed calm. Although from an outsider’s perspective it might have appeared that they had plenty to worry about.

That’s because some of the firm’s biggest areas of focus—health care facilities, hospitality projects and theming work for the Central Florida theme parks—were all being severely impacted by various shutdowns and travel restrictions. How the pandemic would eventually play out for contractors was anyone’s guess, but a re-thinking of future planned projects was a good bet, especially in these three markets.

“We just had to focus on our customer relations and vendor relations and work through supply-chain issues,” Cannon told ENR. “Some of the material price increases were hard for the customers to absorb, but pretty much we were able to get through all of that.” 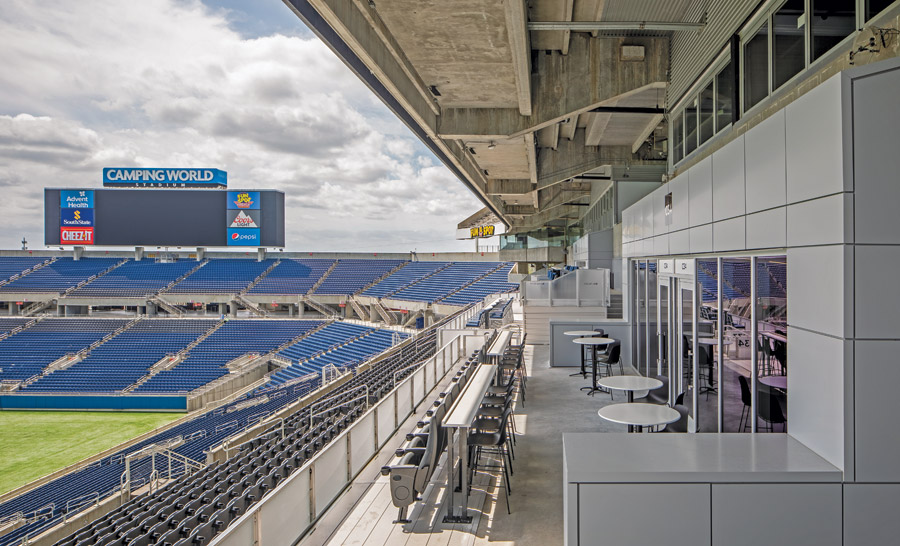 But the pandemic’s effect on revenue was significant. As was the case with most contractors, the supply-chain disruptions, such as extended lead times and rising materials costs, presented a “huge challenge” to KHS&S, says Erik Santiago, KHS&S president. “Our biggest challenge was communication with our customers and the owners,” he adds, noting that the firm tried to be “as transparent as possible” in terms of cost escalations, an approach that he says worked well with owners and contractor clients.

Overall, “There really wasn’t much of a disruption in our backlog, other than the theme parks,” says Santiago. “We were pretty fortunate.” 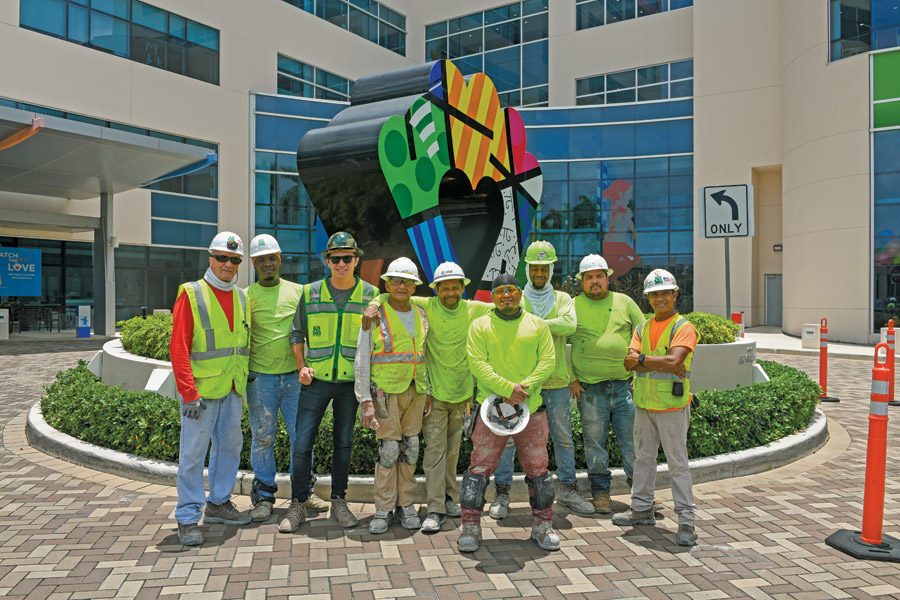 KHS&S crews at the completion of their work at the Joe DiMaggio Children’s Hospital project in Hollywood, Fla.
Image courtesy KHS&S Contractors

The specialty contractor’s Southeast revenue bounced back notably last year, though, jumping by nearly 25% to total just over $94.2 million for 2021.

“Fortunately everything that got delayed did revive in 2021,” says Cannon, who also credits long-term relationships not only with Disney and Universal, but also with health care project owners such as Advent, HCA and, in Tampa Bay, Bayfront Health.

Santiago added that the construction markets in Florida and Texas, especially, have come back relatively strong from 2021 and into 2022, but have seen a slowdown in bidding lately, attributing that possibly to the Federal Reserve’s series of interest rate increases.

Looking forward to 2023, Santiago describes the firm as “pretty positive,” adding that “we should meet our numbers and probably exceed them.” As for 2024, he adds, “we’re cautiously optimistic.”

Aiding the specialty contractor’s recent upturn were several major Florida projects that completed in 2021, including the AdventHealth Taneja Center for Surgery in Tampa—deemed a Best Project in the health care category in ENR Southeast’s 2022 Best Projects contest.

Also boosting the firm’s recent revenue was its work on an expansion on Joe DiMaggio Children’s Hospital in Hollywood, Fla. There, KHS&S saw its scope of work unexpectedly increase when it was discovered that the existing eight-story building’s 89,000-sq-ft exterior stucco system had to be demolished and completely replaced.

The specialty contractor also completed work on multiple projects for Tampa International Airport, including the authority’s SkyCenter, SkyCenter One and the TPA Blue Express Curbside Expansion and Renovation project.

Also in 2020 and 2021, KHS&S completed hurricane repair projects for large resorts in Alabama, and the contractor continued working with Walt Disney Co. on multiple themed projects, the contractor says.

Continued activity in the health care sector—especially in the state of Florida, which recently eased the process for approval of hospital projects by eliminating the certificate of need requirement—should keep KHS&S busy, too, Cannon says.

Looking further ahead, the firm sees plenty of opportunity. Projecting 2022 to end up as “a very good year,” Cannon adds that the company will be working on “a pretty large portion” of Universal Studios’ Epic Universe theme park, which could open by 2025. Reportedly spanning a 750-acre site, the new theme park is estimated to double Universal’s current Orlando footprint. 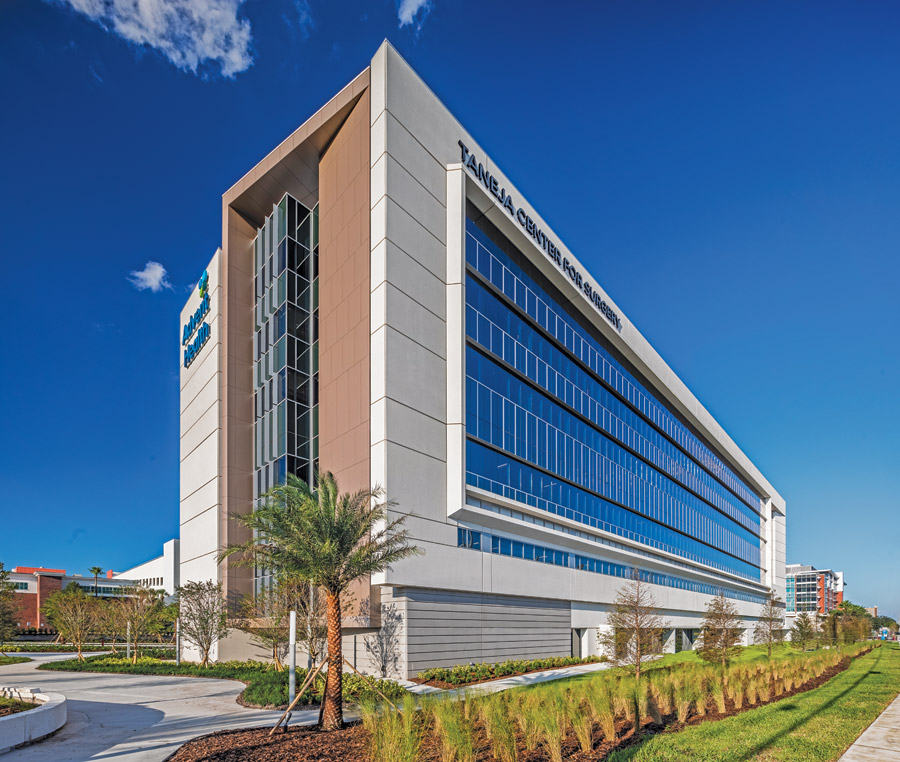 Paying close attention to clients—project owners and contractors alike—is part of KHS&S’s culture, as the firm’s list of clients such as Disney and Universal might indicate. As Cannon says, “It’s those relationships that have made us successful.”

With the company’s focus not only on its home state of Florida, but also the states of Texas and California—and with a history of work in Asia via its West Coast offices—“those relationships” span the U.S. and even internationally, giving KHS&S an unusually expansive footprint for a wall-and-ceiling contractor. That’s helped the firm regularly rank among the nation’s top 10 largest wall-and-ceiling contractors, according to ENR’s annual Top 600 Specialty Contractors ranking.

Additionally, the contractor—which describes itself as a “design-assist specialty building company”—notes a list of deliverables perhaps more extensive than some competitors, with “themed environments” and specialty finishes adding to its repertoire of interiors, exteriors and prefabricated building components. The contractor also touts its focus on and use of lean construction practices as another differentiator.

Representatives with long-term KHS&S clients contacted by ENR report that the firm’s positive impact on a project often goes beyond just the specialty contractor’s own scope of work.

Describing KHS&S as “consistently the strongest partner on the job” is Corbin Clinage, senior construction manager with HCA Healthcare. Clinage, who says he has worked with KHS&S in various roles for about 12 years, notes the contractor’s consistent ability to not only meet or beat its own schedule, but also its penchant for accelerating the entire project.

When KHS&S is working on an HCA project, Clinage says, “We know that they are going to drive the schedule and that they know that it’s actually a meaningful document, not just a tool that just gets put in drawer and used against us.

“They actually help our contractors develop realistic schedules and help keep them throughout the job,” Clinage adds. “So they truly are a partner.”

Offering up similar kudos to KHS&S is John Mallory, director of construction at Tampa International Airport. While working on the atrium portion of TIA’s SkyCenter One project, a nine-story, 270,000-sq-ft office building, for example, KHS&S was able to entirely eliminate supply chain-related issues for their scope of work by being able to pull all of the needed materials from its own existing stockpile.

“There were a lot of challenges with supply chain” on that project, Mallory says. Reporting that KHS&S “had warehouses full of material that other contractors didn’t have,” he added that if the company hadn’t been able to access its own stockpile, “that could have greatly slowed down the overall project.”

Like HCA’s Clinage, Mallory says that when a project that KHS&S is working on starts to encounter overall schedule challenges, the contractor will often offer ideas to the entire team in order to get work back on schedule.

“They’ve been a very good partner for projects as a whole,” Mallory says. “Whether you’re a contractor or an owner, it’s nice when you know that they’re on board.”